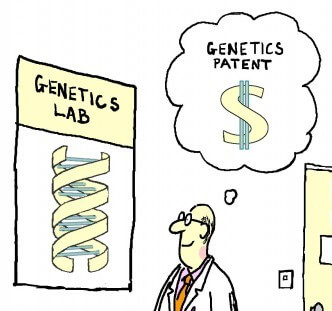 The U.S. Supreme Court held oral arguments this week about whether to uphold Myriad Genetics’s patents on two human genes associated with breast cancer. Myriad identified these genes twenty years ago and then incorporated them in medical screening tests. Myriad charges about $2,000 for each test and the counseling that goes with it—what today seems like a startling high cost since our entire genome can be sequenced for less than $5000. The income from the tests contribute more than 70% of Myriad’s income.

The arguments on both sides are fierce. Many aruge that patenting a gene as discovered in the human body is inherently absurd; you should not be allowed to patent a product of nature and we should all “own” our genes. What’s more, they argue, these patents allow large companies like Myriad to restrict innovation by preventing other groups from working with the genes it has identified. The opposite camp argues that ruling against Myriad and rejecting these patents could put a damper on biotech research, whose upfront costs can be staggering, which could damage innovation in the long run. Both sides seem to think innovation is at stake. But a few voices are arguing that — while the case is undoubtedly important — science has already leapfrogged over the specific patent issues at hand, rendering the ruling far less consequential in determining the course of biotechnology research in the near future.

Andrew Pollack at the New York Times wondered whether the entire case is moot, asking: “Has the field of genetics moved so far so fast, that whatever the court decides, it has come too late to the issue?” He was not referring to the fact that we’ve already spent three decades going down a legal rabbit hole wherein patenting genes is a normal and legal part of the development of all manner of genetics-based technology from drugs to genetically modified crops. Rather, he’s concerned with the fact that the Myriad patents are set to expire in two years anyway, many of the existing patents on human genes have been allowed to lapse and whole genome sequencing may soon be much cheaper than the $4,000 Myriad charges for its two-gene analysis, which could provide a consumer work-around that provides more information for less money—depending on how the Supreme Court rules. “Events on the ground have overtaken the law,” James P. Evans, a professor of genetics and medicine at the University of North Carolina, told the Pollack. The outcome “will be much more ideological than it will be practical.” Many liberals, more than a few scientists among them, seems to see these patents as an overextension of corporate power driven by greed, whereas more conservative industry and business communities—and the scientists therein—believe companies must be able to recoup their investments, and patents are the way to do this.

The implications of the decision are far narrower than the sensationalist headlines imply, writes Bradley Sykes a the Union-Tribune in San Diego:

No matter which way the Supreme Court rules on the Myriad Genetics BRCA breast cancer gene test patenting case, the importance of such patents is diminishing over time. Biotechnology is moving beyond patents derived from naturally occurring gene sequences. The most important biotech patents nowadays are becoming synthetic gene and RNA sequences, proteins and other indisputable contrivances of human ingenuity.

Nobody’s going to argue that a synthetic gene, created in a lab, is not an invention, even though it’s inspired by nature – the best inventions usually are. Right now the argument is over whether or not human genes, as discovered in humans, demonstrate sufficient “invention” on the part of the discoverer to qualify for protection under patent law.

Reading the tea leaves during the Court hearings, it seems the justices are  leaning against Myriad however the justices also seems wary of making any bold decisions. According to a Times report on the hearings, they seem to be struggling to find a way to produce a narrow ruling on a case that has preemptively become a landmark in the minds of many scientists, corporations, and the public. Perhaps they don’t needn’t worry so much about the weight of their decision; the blistering pace of genetic science may already relieved that burden.