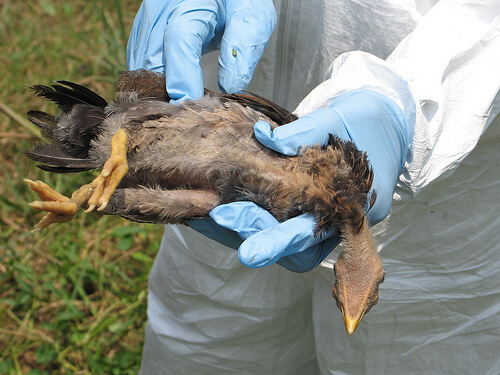 A new flu in China has made the jump from birds to people, infecting more than 100 people and causing more than a dozen deaths. The question that has health officials holding their breath is whether or not the flu, known as H5N7, will mutate to transmit from human-to-human — a key threshold for the development of a pandemic. Unlike previous animal-to-human flu outbreaks, like the H5N1 bird flu of 2003-2004, the global response to this disease has been bolstered by modern genetic techniques to both identify and address the new disease.

With 2009’s H1N1 swine flu pandemic—and the six months it took to make a vaccine widely available—still fresh in many people’s memories, preparations for vaccine development are of paramount concern.

This new strain of H7N9 was first identified through genetic sequencing, and the virus’s genetic data was made available online on March 30. By the following week, scientists had created synthetic versions of the genes that characterize the outer shell of the new virus—its immunological signature. Our bodies learn to recognize this signature part of the virus and attack after we’re successfully vaccinated. By combining these genetically engineered genes with naturally occurring genes for viruses that are easy to grow in a lab, vaccine-makers are able to make a custom virus that can be used as the “seed” for development of a vaccine without going through the time-consuming and imprecise process of trying to isolate a sample of the virus from a human patient and grow that sample in chicken eggs.

This new and dramaticly creative flu vaccine development process has revolutionized a scientific process that had remained almost unchanged since the 1940s.

Even as U.S. scientists were getting a head-start on the vaccine creation process, Chinese scientists were studying the genetics of the virus to learn about its ecological origins and its potential for creating a pandemic. According to a Scientific American, Chinese authorities have 400 laboratories looking for genetic changes in the virus.

It’s already known that some aspects of the virus’s genome hint at a high potential for mutation. It’s speculated that one of those new mutated innovations allow the virus to spread from human-to-human instead of only from bird-to-human. As yet, there are no confirmed cases of sustained human-to-human transmission.

Scientists’ ability to recognize this virus’s potential to develop the capacity for human transmission is a vindication of some controversial research using the H5N1 bird flu, which became infamous in 2003 and 2004 for killing tens of millions of  birds and the forced culling of hundreds of millions of others to stem the spread. Scientists used genetic engineering to tweak the H5N1 virus and create a version with two major changes to its pathology—on that was functionally harmless but also able to replicate efficiently in mammals. In doing so, they learned what mutations were necessary to make a human-transmissible strain of bird flu. They also determined that this weakened virus could be used as an alternative, living vaccine; infecting people with it would allow their immune systems to prepare for any encounter with the “real” virus.

Despite the risk inherent in giving the H5N1 precisely the mutations it needs to transmit from human-to-human, and thus evoking fears of a lab-grown viral research, it’s bold research like this that has opened the door for scientists today to ascertain that H7N9 is likely to mutate and to recognize the mutations that could lead to human transmission.

The story of H5N7 is still unfolding—flu outbreaks follow unusual and often unexpected courses. As of yet, no major science organization has sounded a full-blown alarm and the threat to the United States,appers low. But experts agree that it’s worthwhile to begin preparing now in case a pandemic occurs. Modern synthetic techniques have already shaved two weeks off the vaccine creation process. Should it be needed—a viable vaccine could be ready for deployment by late July.

Kenrick Vezina is an editor for the Genetic Literacy Project and a freelance science writer and educator based in the Greater Boston Area.