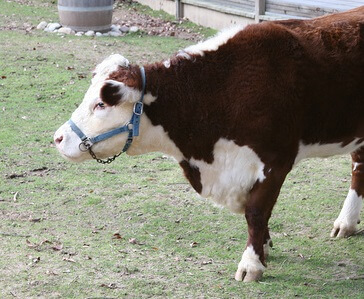 It’s always revealing how the press portrays the latest development in agricultural genetics—soberly or with the rush of hysteria that has come to define media coverage of biotechnology.

Unfortunately, a series of reports over the weekend about advances in the development of a dairy cow genetically tweaked to be hornless were tinged with familiar exaggerations and distortions. “Scientists are designing a health and safety cow, genetically altered to have no horns,” claimed the Sunday Times. “Hornless ‘Frankencow’: Genetic engineers aim to create super-bovine,” shouted Russia Today. Geneticists, they say, are “extracting” a strip of DNA from the genome of one cattle and “implanting” DNA it into another. A stream of stories as outlined The Daily Telegraph and a slew of other news outlets read like pages from the anti-GMO playbook. The stories are liberally sprinkled with code words about designer animals, transgenics and Frankencows. No wonder people are in a tizzy.

Actually, the innovations that led to the hornless dairy cow are both breathtaking and simple—part of an international effort that has found a less expensive, faster, safer and more precise way to combine genetic engineering with standard breeding techniques to modify livestock. It’s an advance, not a revolution. Scientists in the United Kingdom and the United States are partnering to develop a classic farm animal—hornless dairy cows so cattle will not endanger humans, themselves and other animals in the vicinity of their swinging heads. 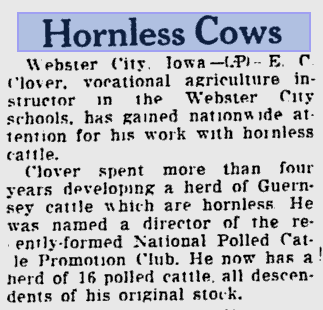 Polled livestock—animals without horns in normally horned species—have been around for ages. Note this article (at left) from 1947 describing a farmer in Iowa who had developed a herd of hornless Guernsey cattle, bringing his total of polled cattle to 16, all descendants of the original stock.

While farmers have been able to crossbreed beef cattle, such as Aberdeen Angus, so they do not have dangerous horns, they’ve had less luck in the most productive dairy breeds, particularly Holsteins, the world’s highest producing dairy cow.

Could biotechnology lend a hand here? Scott Fahrenkrug, a professor of genetics and the University of Minnesota believes it could. Teaming with scientists at Texas A&M University and the University of Edinburgh, Fahrenkrug founded a company, Recombinetics, that uses “molecular scissors” dubbed TALENs to move around natural snippets of DNA found in animals. Fahrenkrug’s technique does not involve transgenics, which results from moving genes from one species to another. While utterly safe, the very mention of genetic manipulation enrages anti-GMO activists.  In this case, Recombinetics is mirroring nature—taking snippets of DNA that first appeared through natural, spontaneous mutations in livestock hundreds of years ago to create hornless cows. The snippets are copied—not inserted as various reports had it. They are not moved. No “foreign” DNA is inserted. We’ve been eating these cows and drinking their milk for centuries—so we are sure there are no adverse health consequences.

“The mutation is totally natural and clearly safe,” Fahrenkrug told me. “We could move this mutation crudely through cross-breeding. But since the 1960s, we have had a 10-fold increase in milk production. If we had to create these hornless dairy cows by these old-fashioned techniques, it could take years and at best it would result in a mix-up of the beef and milk stocks. They would devastate both lines. The other alternative is what we choose to do it. Let’s do it precisely, protecting the health and integrity of the animals and guaranteeing a robust beef and milk lines.”

So, here we have a technique that is not transgenic, as most news articles implied. No “foreign” DNA is inserted, as many reports had it. No genetically modified organisms (GMOs) were created. Yet when you read the reports—or worse, the comments posted by activists—you would think Mother Nature had been violated.

Progressives and sustainability experts should be eagerly promoting and embracing Fahrenkrug’s editing technique, which would mean that fewer cows are manually dehorned on farms, a much more invasive and painful process. “This would be a major advance in animal welfare,” said Geoff Simm, a professor of animal breeding who chairs the UK government’s Farm Animal Genetic Resources Committee, and has long championed the idea. People for the Ethical Treatment of Animals has expressed tentative support for this innovation, noting it would have a dramatic and positive impact on the lives of livestock. But more uncompromising groups, such as the American Anti-Vivisection Society, remain opposed to it on the grounds that it might make factory farming, which is their central target, more acceptable.

The beauty of Fahrenkrug’s work is that scientists are using what are essentially classical breeding techniques, albeit more precisely and without the use of antibiotic resistance genes (one of the main targets of anti-GMO campaigners). The process mimics natural genetic mutations so closely that it would be impossible to tell from examining the animal’s DNA whether or not it had been altered, researchers say.

Creating hornless milk cows is just one of the cutting edge projects using this editing technique. Fahrenkrug is using similar techniques to develop pigs and cows that are resistant to hoof and mouth disease. He’s also pioneered the development of “sustainable cows”—animals that grow larger yet consume less protein and also give off less gases released as methane waste, which could dramatically cut down on greenhouse gas levels. He’s also identified ways to knock out a disease carried by as much as 25 percent of Jersey cows simply by editing out a single letter in the 3 billion bovine genetic alphabet.

Professor Bruce Whitelaw, Fahrenkrug’s partner at the Roslin Institute at the University of Edinburgh, calls these advances “clean genetic engineering” for how precise and safe it is, thanks for the fact that it uses existing mutations—yet that distinction is lost on anti-GMO campaigners who paint biotechnology with a broad brush. “Unless you had an audit trail of how that animal was formed, you would have no way of knowing how that mutation happened. It could have happened naturally, or in this case been engineered by a DNA editor.

Most anti-GMO campaigners, baffled by the simplicity of Fahrenkrug’s technological breakthroughs, continue to mischaracterize his work and similar biotechnology, breakthroughs by widely circulating the “Frankencow” canard. It’s not just campaigners, however, Fahrenkrug notes. He pointed to a central clause in the “Genetically Engineered Food Right to Know Act,” introduced in Congress last week. The wording was clearly guided by activists rather than scientists, he told me. For example, the bill now uses a sweeping and very unscientific definition of “genetic engineering” to include “in vitro nucleic acid techniques, including recombinant DNA and direct injection of nucleic acid into cells or organelles.” That’s stunning in its breadth … and would result in mandatory labeling of natural processes, such as those introduced by Fahrenkrug. In effect the poorly written legislation attempts to re-classify some simple techniques used in classical breeding as GMOs—and could in the process endanger the technologically enhanced classic breeding techniques that are poised to revolutionize animal welfare. However intended, that’s just one of many passages in this shabbily written bill that will retard or kill the biotechnology revolution.

If passed in its current form, this bill could undo progress in our science-based regulatory system and unnecessarily complicate the marketing of natural and safe products springing from Fahrenkrug’s and others pioneering work in gene editing.  This backwards thinking in the Era of the Genome would tragically hinder the development of foods focused on sustainability, feeding the burgeoning world, and enhancing animal welfare.