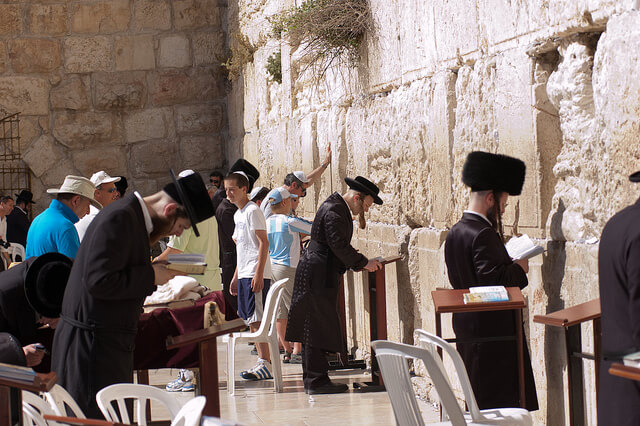 It’s one of the consequences of the ongoing conflict between Israel and its neighbors that the origins of the “Jewish people” periodically surfaces as an issue of great controversy. It’s particularly troublesome when a scientist—in this case, an Israeli molecular geneticist whose motivations appear more personal and ideological than scientific—stokes the contretemps.

The current brouhaha arises over a recent study by Eran Elhaik and is accompanied by his personal attacks on more mainstream scientists who have eviscerated his work. In the face of overwhelming evidence from dozens of studies over twenty years from geneticists and historians around the world, Elhaik is aggressively stumping on behalf of his belief that most Jews trace their seminal ancestry not to the Middle East but to the Caucusus and Eastern Europe.

Elhaik, who is now a post-doctoral researcher at Johns Hopkins, is recirculating the debunked “Khazarian hypothesis” promoted by journalist Arthur Koestler in his 1976 book, The Thirteenth Tribe, written before scientists had the tools to compare genomes and challenge his conclusion.

The Khazarian myth was more recently recycled (to great applause by anti-Israeli activists and some pro-Palestinian groups) in no less convincing form by Israeli French historian Shlomo Sand in The Invention of the Jewish People, published in 2008—a book panned by both historians and geneticists.

Elhaik reengaged the faux controversy late last year when the Oxford journal Genome Biology and Evolution published his study, “The Missing Link of Jewish European Ancestry: Contrasting the Rhineland and the Khazarian Hypotheses.” The young Jewish researcher challenged the so-called “Rhineland hypothesis”—the broadly accepted genetic and historic evidence that about 80 percent of Jewish Ashkenazi males trace their ancestry to a core population of approximately 20,000 Eastern European Jews who originated in the Middle East. Elhaik wrote that the Khazars converted to Judaism in the eighth century, although historians believe and genetic evidence confirms that only a fraction of the population converted, including almost certainly royalty and some members of the aristocracy.

A paper published in 2000 by geneticists Harry Ostrer, a professor of genetics at the Albert Einstein College of Medicine, and University of Arizona geneticist Michael Hammer showed that most Ashkenazis, Italians, North Africans, Iraqi, Iranian, Kurdish and Yemenite Jews share common Y-DNA haplotypes that are also found among many Arabs from Palestine, Lebanon and Syria.  Only a small percentage of the Y-DNA of Jews originated outside of the Middle East—some in the Caucusus.

The competing Rhineland and Khazarian theories were most recently discussed by Ostrer in two studies published in 2012 and in his well received book, Legacy: A Genetic History of the Jewish People. He found that geographically and culturally distant Jews still have more genes in common than they do with non-Jews around them, and that those genes can be traced back to the Levant, an area including modern-day Israel. “All European [Ashkenazi] Jews seem connected on the order of fourth or fifth cousins, Ostrer has said.

The concept of the “Jewish people” remains controversial. The Law of Return, the Israeli law that established the right of Jews around the world to settle in Israel and which remains in force today, was a central tenet of Zionism. The DNA that links Ashkenazi, Sephardi and Mizrahi, three prominent culturally and geographically distinct Jewish groups, could conceivably be used to support Zionist territorial claims —except, as Ostrer has pointed out, some of the same markers can be found in Palestinians, distant genetic cousins of the Jews, as well. Palestinians, understandably, want their own ‘right of return’.

That disagreement over the interpretations of Middle Eastern DNA also pits Jewish traditionalists against a particular strain of secular Jewish ultra-liberals who have joined with anti-Israeli Arabs and many non-Jews to argue for an end to Israel as a Jewish nation. Their hero is the Austrian-born Shlomo Sand—and now Elhaik. His study gained buzz in neo-Nazi websites and radical anti-Israeli and more radical pro-Palestinian blogs. For example, the notorious former Ku Klux Klansman David Duke actually attacked Elhaik in his latest anti-Jewish rant—Duke’s anti-Semitic beliefs hang on the fact that Jews are genetically cohesive and conspiratorial. “The disruptive and conflict-ridden behavior which has marked out Jewish Supremacist activities through the millennia strongly suggests that Jews have remained more or less genetically uniform and have … developed a group evolutionary survival strategy based on a common biological unity — something which strongly militates against the Khazar theory,” Duke wrote in his blog in February.

While Elhaik’s work has provided ideological support for those seeking the destruction of Israel, it’s fallen flat among established scientists, who peer reviewed his work and found it sloppy at best and political at worst.

“He’s just wrong,” said Marcus Feldman of Stanford University, a leading researcher in Jewish genetics. “If you take all of the careful genetic population analysis that has been done over the last 15 years… there’s no doubt about the common Middle Eastern origin,” he said. He added that Elhaik’s paper “is sort of a one-off.”

Discover’s Razib Khan did a textured critique in his Gene Expression blog, noting the study’s historical fuzziness and its selective use of data to come up with what seems like a pre-cooked conclusion. As Razib writes, it’s hardly surprising that we would find a small but sizable Khazarian contribution to the “Jewish gene pool”. In fact the male line of my own family traces to the Caucusus, suggesting I’m one of the 20 percent or so of Jews whose lineage traces to converted royal Khazarians. But that view is widely acknowledged by Ostrer, Hammer, Feldman, Michael Thomas and every major researcher in this area—as summarized in my book, Abraham’s Children: Race, Identity and the DNA of the Chosen People.

The rebuke of Elhaik’s study apparently has irked the beleaguered and brash researcher. He’s launched a new offensive—the double entendre is intentional—as chronicled in the Jewish Forward. Elhaik is now calling the world’s top geneticists “liars” and “frauds.” When I weighed in on the magazine’s discussion board, Elhaik responded with academic restraint, claiming my reporting was no better than the geneticists he trashed, saying it shared “common ground with the Nazism (sic) ideology.”

Unlike Christianity and Islam, Judaism is not solely a faith-based religion. Its origins, as is the case with the other prominent surviving ancient religion, Zoroastrianism, are tribal. The blood connections mentioned endlessly in the Hebrew Bible are not just symbolic; the Jews of ancient Israel were a clan of connected tribes who coalesced over hundreds of years. While Jesus and later Mohammad transformed the notion of “blood” into “faith”—one could become a Christian or Muslim through faith alone—Judaism has always retained an ancestral component.

In the Torah, that blood link is patrilineal, passed on from father to son. That tradition is preserved today in the Jewish priesthood, known as the Aaronite line. According to the Bible (and we have no way to know if this is historical or apocryphal), Aaron was anointed as the first Jewish priest and his sons and their descendants became the seed population of the Jewish priesthood. Jewish Cohanim—the word means ‘priests’ in Hebrew—supervised the inner sanctum until the destruction of the Second Temple in the first century, after which the Aaronite line was preserved by tradition, with Cohanim having special privileges and responsibilities to this day.

Are present day Cohanim descended from Aaron? That question is unanswerable; we do not even know for certain that Aaron or Moses even existed. However, DNA studies of the Y chromosome have determined that a majority of self-proclaimed Cohanim (it’s an oral tradition) has a set of genetic markers that trace back approximately three thousand years to a single common ancestor. In other words, if there was no Aaron, there was certainly a High Priest early in the Jewish tradition whose ancestors have retained evidence of that tradition in their DNA.

As discussed in Abraham’s Children, Judaism has always retained its tribal roots even as faith-based religions flourished. In the centuries after the destruction of the Second Temple in the first century, Jewish lineage became defined through the mother rather than the father. Jewishness is now based on a triple helix: belief in God (although many Jews are agnostic or atheist); recognition of ancient Israel as a Biblical homeland; and literal blood connection with other Jews, passed on from generation to generation.

To many people—including and especially Jews sensitive to the Nazi branding of Jews as a race, which led to the near extinction of the religion—acknowledging the genetic cohesiveness of Judaism is uncomfortable. Anything that marks Jews as essentially different runs the risk of stirring either anti- or philo-Semitism. But that doesn’t mean we can ignore the factual reality of what Ostrer calls the “biological basis of Jewishness” and “Jewish genetics.” Acknowledging the genetic distinctiveness of Jews is “fraught with peril,” but we must grapple with the hard evidence of “human differences” if we seek to understand their implications of the age of genetics.