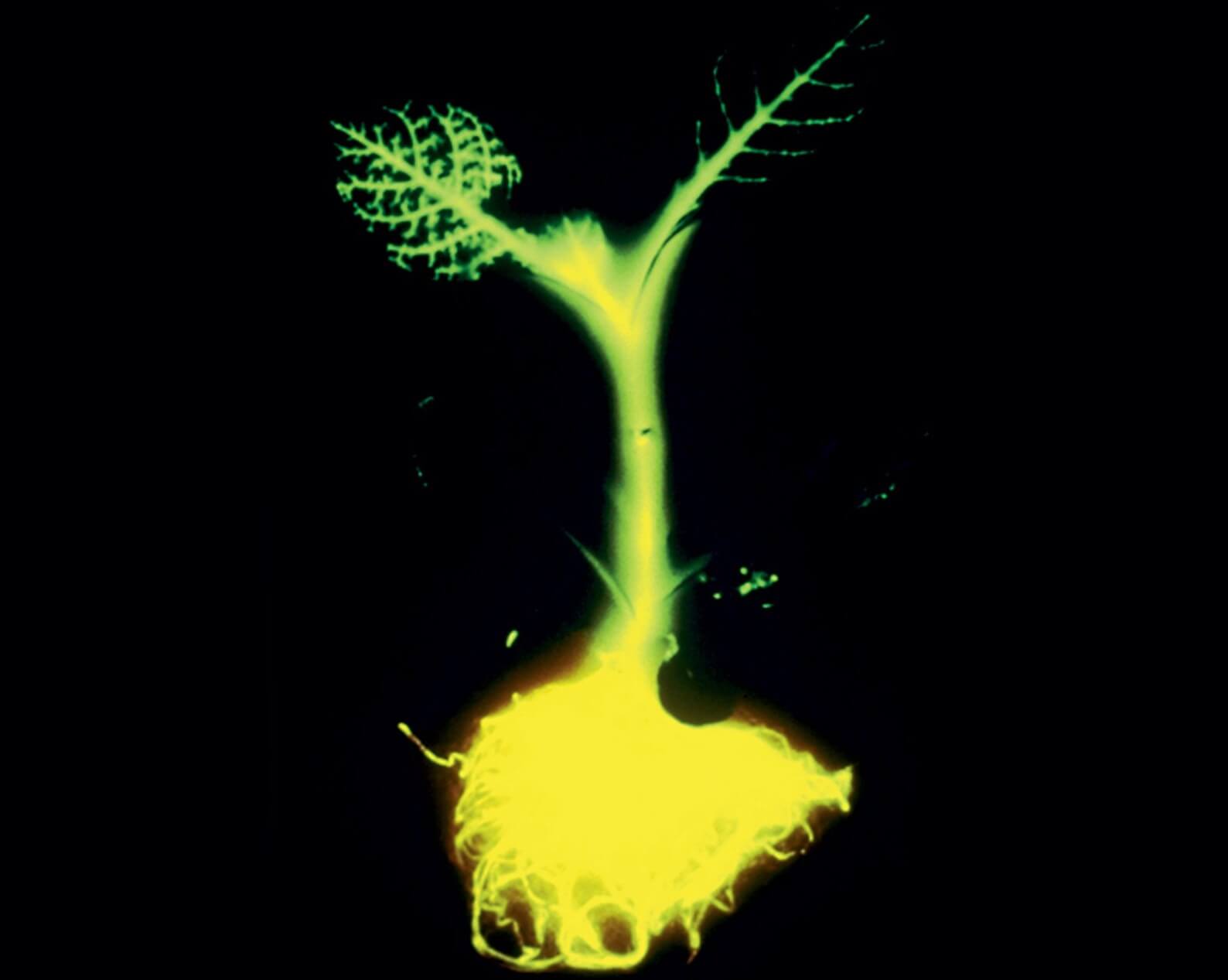 The plants were engineered by inserting genes from fireflies (luciferin and luciferase) in to their genomes. These are genes used as a standard in biology labs to make the cells of various organisms glow (and easier to see under a microscope).  This is because they are known to carry out this very specific function without affecting other parts of the organisms’ physiology/behavior.

“There are some people in synthetic-biology circles who would yawn at what we’re doing,” Evans says.

The project was funded by crowd sourcing through Kickstarter, which allows entrepreneurs to advertise projects on their website and solicit donations to meet a specific funding goal by a specific deadline.  If people like a project, they can pledge money to make it happen.  Project creators can advertise rewards in exchange for donations, but those who contribute have no rights to the project.

The Glowing Plant team pledged to send donors glowing plants in return for their donations—rose seeds to donators of $150+ and arabiposis seeds (part of the mustard family) to donators of $40+. The project was wildly successful; within weeks hundreds of thousands of dollars had poured into Glowing Plant’s coffers, delighting the founders—and setting off alarm bells among anti-GMO activists.

Various anti-biotechnology groups railed against the dangers of this do-it-yourself approach to synthetic biology and specifically targeted Kickstarter for its role in supporting the Glowing Plant project. In one typical example, as the GLP wrote in a previous article on this project, “Tom Philpott of Mother Jones—always ready to play the “Frankengene” card—imagined an apocalyptic scenario in which do-it-yourself DNA tinkerers unleash genetic Godzillas on a hapless public.

Shortly before the fund raising deadline was reached, with the dollars pouring in, anti-GMO environmental organizations, Friends of the Earth and the ETC Group, wrote to Kickstarter and to the US Department of Agriculture, which regulates genetically modified crops, in an effort to shut down the fundraising effort.

According to the team’s site the US Department of Agriculture determined that the method used to create the Glowing Plants would not endow the seeds with genes from known plant pathogens and, therefore, they are not regulated.

The project “will likely result in widespread, random and uncontrolled release of bioengineered seeds and plants produced through the controversial and risky techniques of synthetic biology,” they wrote. “Kickstarter could still do the right thing and refuse to fund this risky release,” wrote Jim Thomas, of the ETC group, on the last day of the fund raising effort.

When the bell rang on the project on June 7, Glowing Plant had raised $484,000 from donors—far more than they had dreamed of raising, making it one of the most successful fund raising efforts in Kickstarter history.

Kickstarter initially responded to the anti-GMO campaign by telling critics to take up their concerns directly with the project’s organizers. Then last week Kickstarter changed its position, announcing it was amending its project guidelines to specifically exclude the offering of Genetically Modified Organisms (GMOs) as donation rewards.

It’s not clear why Kickstarter buckled to the high-profile attack campaign. The Glowing Plant Team has started a petition to urge Kickstarter to reconsider this amendment.

“We already have the funds from the project so this decision has no impact on our ability to deliver the project to you our backers, but we are sorely disappointed by their decision and the impact it may have on future projects,” they write. Should other synthetic biology teams seek to create a market through Kickstarter, the successful marketing strategy will not be available to them.

In stipulating that projects cannot offer GMOs as rewards, Kickstarter appears to be siding with anti-GMO activist that are against the widespread use  of genetically modified plants out of principle, often claiming that they pose major biohazards. Kickstarter has yet to make a formal statement about the new guidelines.