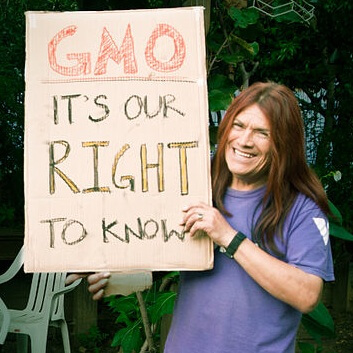 Maybe mandatory labeling is not such a good idea after all.

The movement for the labeling of genetically modified foods has found growing momentum thanks in large part to lobby groups such as Citizens for Health, which represent companies selling dietary supplements and other products.

Citizens for Health, among other groups, has for years pushed lawmakers to demand product labeling of GMOs, despite resistance from mainstream scientists, physicians, farmers and companies worried such labeling would provide misleading information to consumers and would unnecessarily damage the food and crop biotech industries. Its founder, James S. Turner, just happens to be the lawyer for Jeffrey Smith, who runs the anti-GMO website Institute for Responsible Technology, and has funded his Genetic Roulette book and movie efforts, which have been devastatingly reviewed by scientists and yet are cited as reputable sources by crop biotechnology activist campaigners.

In an ironic twist, Citizens for Health and other big guns in the supplement industry are now fighting their own battle against mandatory labeling for supplements. Senate Bill 1425, also known as the Dietary Supplement Labeling Act of 2013, would require food supplement companies to label their supplements in much the same way similar legislation would mandate GMO labeling.

Supplement companies and their interest groups fear that the legislation would impose severe restrictions on their industry and gradually drive the price of supplements higher than most would be able to afford, thereby threatening their industry’s huge profit margins. Essentially, they are making the same argument that GMO companies and supporters have made since the labeling movement was started several years ago.

In a message to their supporters, Citizens for Health wrote:

Supplements are not drugs, and therefore, deserve their own system of regulation – and that’s the point. Such a system already exists thanks to the Dietary Supplement Health and Education Act of 1994 (DSHEA), and it has done a more than adequate job protecting consumers largely due to supplement companies’ compliance with, and support of, that system.

Put simply: At best, S. 1425 is a bad bill, albeit with good intentions. At worst, it uses recent attacks on supplement safety as an excuse to take another crack at imposing unnecessary regulations on the dietary supplement industry, which has demonstrated time and again its ability to ensure the safety of its products.

Another big name in the industry, Joseph Mercola, who has made millions hawking “health products” and other supplements–Mercola was one of the primary financial backers of the failed GMO labeling bill initiative in California and is now pouring money to generate support for Washington state’s bill–has been almost apoplectic in his opposition to mandatory labeling of the products he sells. He calls the legislation “ridiculous,” asserting that the “bill threatens the supplement industry by granting the FDA more power to regulate supplements as if they were drugs, effectively putting supplement companies out of business.”

What makes labeling so necessary for GMOs but not for other ingested products, such as dietary supplements? The actions of Citizens for Health, Mercola and other interest groups to demand legislation for mandated GMO labeling and resist similar legislation impacting their own economic interests is a glaring hypocrisy that should make people think twice about the reasoning behind the labeling campaigns.

Demands to label foods are cloaked in the guise of consumers’ right to know what they are putting in to their bodies. But when the same argument is focused on supplement companies, as it will inevitably be for other industries now fighting to damage farmers, food producers and biotechnology companies through mandated labeling, they don’t think consumers have the same right to know. It’s obvious that the right to know demands are not truly in the interest of consumer protection, but a demonization tool used to dissuade the public from buying products that could threaten the market share of a company or industry.

What makes this hypocrisy all the worse is the denial by supplement companies of the questionable science behind their industry and products. Their campaigns challenge the safety of GMOs despite the fact that there is no evidence that genetically modified crops are harmful. Meanwhile, numerous studies and other hard evidence suggest very strongly that supplement usage, at best, has little to no beneficial effect on a person’s health while, at worst, are potentially harmful–and those very real concerns are the driving force behind Senator Dick Durbin’s legislation.

Hopefully, such hypocrisy will make people who are so adamant about GMO labeling on the grounds that it’s the public’s “right to know” will think twice about what motivations are really behind such legislation.