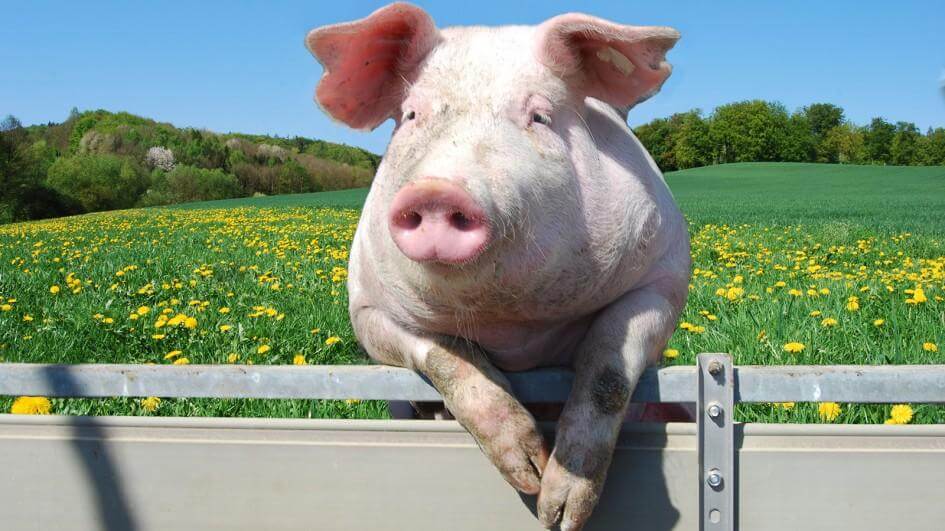 The tiny cadre of anti-biotechnology activists who reside in the scientific community are perverting science by publishing spurious findings intended to scare consumers, ratchet up regulations, and impede the cultivation and sale of genetically engineered (GE, also known as “genetically modified,” or GM) crops.

As we wrote here last September about French scientist Gilles-Eric Séralini, who had claimed that his research showed that the consumption of genetically engineered corn causes tumors in rats, “he has crossed the line from merely performing and reporting flawed experiments to committing gross scientific misconduct.”

There is another more recent example — a long-term study of pigs fed genetically engineered feed, by Judy Carman, a researcher at Flinders University in Adelaide, Australia, and head of an anti-genetic engineering “institute.”  In June Carman and co-authors published a paper in the obscure Journal of Organic Systems, which concluded that weanling pigs were harmed by consuming a diet containing GE soybeans and GE corn.  Specifically, the paper claims that compared to the control diets, experimental diets containing GE feed produced stomach inflammation and increased uterus weight.

The paper has received a modicum of attention on the Internet and in the media and has been cited by the usual group of activist propagandists as evidence that food from GE crops is inherently dangerous.

The study has a number of fatal flaws.  It is not surprising, therefore, that its conclusions are contradicted by hundreds of carefully conducted GE feeding studies – many funded by the highly risk-averse European Commission — in more than a dozen species, which found no such effects.

Noted anthropologist Cameron Wesson once remarked, “I can’t understand why it is easier for some people to avoid the kilos of evidence which contradict their views in a search for the fragmentary gram which they can hold up as proving their ‘truth.’” An analysis of the Carman paper illustrates Wesson’s lament, as does overwhelming real-world experience: Untold billions of pigs, chickens and cattle routinely have been fed GE feed with no ill effects.  Are we supposed to believe that farmers who produce livestock somehow failed to notice that their animals were failing to thrive?

In Carman’s 23-week study, 168 pigs were divided into two equal groups of 84 animals, with one group fed a “normal” soy-corn diet while the other received a diet containing GE soy and GE corn.  Even a cursory reading of the abstract of the paper suggests that the diets in the study that contained GE feed were benign – and therefore, that the authors’ conclusions are invalid — given that “[t]here were no differences between pigs fed the GE and non-GE diets for feed intake, weight gain, mortality, and routine blood biochemistry measurements.”

The results of the experiment do, however, suggest that researchers may have harmed the animals through poor stewardship: An unusually high number of animals died, with mortality equally divided between the control (14%) and experimental (13%) groups.  Another striking finding was that according to post-mortem pathology, almost 60% of the animals in both groups suffered from pneumonia, which may have caused the unusually high mortality.  Because reliable results cannot be expected from sick animals, competent investigators would have perceived the need to scrap this study and repeat it.

The experiment was poorly designed.  Potentially important data of several kinds — including hematologic studies (which would reflect inflammation, if it were present), per-animal feed consumption and measurement of mold-related substances such as mycotoxic trichothecenes and zearalenone in the feed (which could have been useful in interpreting the cause of any inflammation) — were not collected.

According to the authors, the first major finding was that “GE-fed pigs had a higher rate of severe stomach inflammation with a rate of 32% of GE-fed pigs compared to 12% of non-GE-fed pigs (p=0.004).”  There are significant problems with this conclusion.   The most important is that the authors used statistics inappropriately. In effect, they fixated on a single data point – the difference in “severe inflammation” between the GE-fed and non-GE-fed animals – to the exclusion of other relevant data.  For example, if one were to combine the stomach inflammation data (in Table 3 of the paper) into two groups – “no to mild inflammation” vs “moderate to severe inflammation,” the difference between GE-fed and non-GE-fed animals disappears.  And so does the authors’ primary conclusion.

The supposed “discovery” by Carman et al of the difference in severe inflammation was not hypothesis-driven; it merely jumped into the boat during a statistical fishing expedition that, in effect, compared a wide array of parameters until a difference was found between the two groups of pigs which the authors considered ideologically suitable.   However, when appropriate and widely accepted methods of statistical analysis are applied, no statistical differences are found between control and experimental groups.

Another major deficiency is that the assay for “inflammation” used in the study — subjective evaluation of redness of post-mortem extirpated stomachs – is not, in fact, a reliable measure of inflammation.  There are a number of confounding factors that can influence post-mortem stomach color, including time since last meal, stress and hormonal state (possibly related to proximity to other animals being slaughtered), and time since death.  Pathologists commonly use more direct and reliable parameters such as histopathology and histochemistry to evaluate inflammation.

Similar problems can be found in the part of the study that reported that the uteri of GE-fed female pigs were 25% heavier than those fed the non-GE control diet.  A small increase in uterine weight (0.12 vs. 0.10% of body weight) was observed, but the highest uterine weight  in the GE group (0.244%) is well below the maximum weight in the control group (0.31%) and within the range typically found for pigs of this age.  In any case, such a small difference in weight is likely meaningless and the result of normal variation that could be attributable to a number of factors.  These include the fact that the pigs were at an age at which they would enter puberty, which would cause a rapid increase in uterine weight; variable amounts of fluid in the uteri; and differences in the size of the pigs.  Estrus (heat) can markedly increase uterine weight as well.  In summary, even if the reported difference in uterine weight is real, its cause and significance are uncertain.

The report suffers from numerous other major deficiencies and inconsistencies, some of which were identified in a scathing critique of the Carman et al paper by the Food Standards Agency of Australia and New Zealand (FSANZ):

Additional deficiencies that we and others have identified:

Given this litany of deficiencies, one must wonder why the study was published. The Journal of Organic Systems is hardly a leading journal for reporting animal studies.  It is not indexed by PubMed and its major focus is certainly not animal nutrition.   Kevin Folta, a plant scientist and professor of horticultural sciences at the University of Florida, described it as “an almost non-existent, web-based journal that does not even have an impact factor,” a measure of influence.  Moreover, he notes that “the JOS has sponsors, one [of which] is the Organic Federation of Australia,” which has a potent self-interest in disparaging genetic engineering.

Indeed, there is more than a hint that bias, animus and self-interest were the impetuses for these experiments in the first place.  The lead author and spokesperson for the research, Judy Carman, who had not previously published studies of this kind, in 2004 founded an NGO whose mission is explicitly stated as opposition to GE technology in agriculture.  She has a long history of publicly denouncing GE crops as dangerous to human health and has admitted that significant funding for the study came in part from the Institute for Responsible Technology, which is headed by Jeffrey Smith, who is among the most extreme anti-genetic engineering activists.

While the study’s authors were focusing on arguably non-existent differences in uterine weight and stomach inflammation between the control and experimental groups, they overlooked several even more striking differences.  Control animals were twice as likely as those in the GE-fed group to have heart abnormalities (15 % vs. 7%), liver abnormalities (8% vs. 4%), and fibrous pleuritis or pericarditis abnormalities (12% vs. 6%).  Taken at face value, such findings would suggest to an unbiased investigator a striking protective effect of GE feed!  (We make no such claim. Rather, we suspect that these inexplicable post-mortem pathological findings simply reflect the sad state of health of the experimental animals or else are artifacts of data mining, and that one must simply disregard entirely the results of the experiment.)

Undeterred from their a priori intention to discredit GE technology and its products, Carman and her collaborators appear to have been unable (or unwilling) to interpret their own findings dispassionately and professionally.  This illustrates the perilous combination of investigator bias and data mining: Without a scientifically sound hypothesis that is to be tested, investigators can cherry-pick spurious numbers to come to almost any conclusion they wish.

Why would investigators with a bias and conflict of interest risk their reputations by publishing pseudo-scientific studies that make a mockery of sound peer-reviewed science?  They are true-believers driven by ideology, and they know there is little likelihood they will be held accountable for scientific misconduct or the unethical treatment of animals.  They know that their work will be widely reported by the media and provide fodder for the peddlers of disinformation about genetic engineering.

The anti-genetic engineering movement is generously supported on many fronts by those who seek to profit from stymieing science and misleading the public.  Its campaigns are openly funded and promoted by mainstream organic food marketers and alternative health and supplement hucksters — cynical fear-profiteers who benefit from increased consumer mistrust in their competitors’ products.

The “eat ours because theirs will give you cancer (or stomach inflammation)” marketing campaigns and the financial support of fear-mongering activist groups in North America alone is in the billions of dollars per year.

The media are complicit in promulgating pseudo-science.  Journalists and columnists are often untutored in the nuances of science, and rather than dig for the real story – which is that experiments like those of Carman and Séralini should be condemned and their authors sanctioned for misconduct — the media commonly pass along misinformation uncritically.  (And it encourages the lesser media outlets when major ones such as the New York Times and National Public Radio promulgate disinformation, which is often the case.)

Anti-genetic engineering scientists remonstrate that they are “just doing science” and complain that criticism of their work is bought and paid for by the biotech industry, a charge that in our experience is baseless.  The truth is that ethical scientists do not have to be paid to object to bad science, because they resent ideologically-driven, dishonest articles that contaminate the scientific literature.  They endorse the observation of playwright and essayist George Bernard Shaw: “Beware of false knowledge; it is more dangerous than ignorance.”