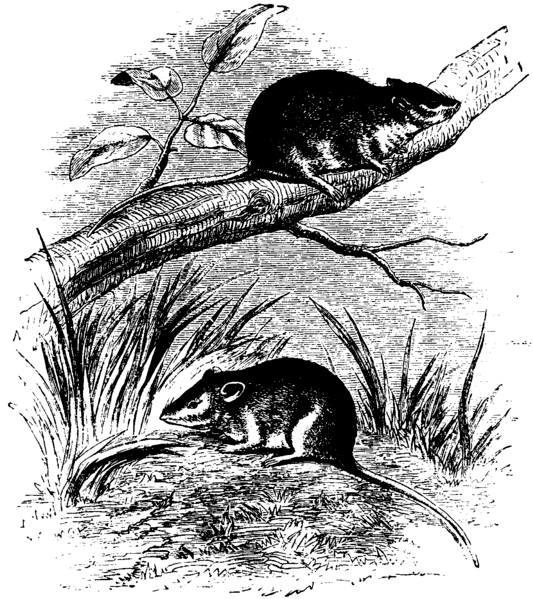 We mammals have been around for a long time, the earliest version having appeared perhaps 160 million years ago. There was just one continent on this world then, the supercontinent Pangaea, but plate tectonics had already begun to rip it apart. Mammals were left to their own evolutionary devices on four different continents. Eventually they became the most common land vertebrates everywhere, and the biggest ones too.

The most successful among them were the placental mammals. The placenta, as you probably know, is a specialized organ that delivers food and oxygen to a fetus developing in a mother’s uterus and also gets rid of its wastes. It evolved from the tissue inside eggs that protect the embryos of birds, monotremes, and other egg-laying species. The placenta has been quite a useful invention; placentals now account for about 95 percent of the 5500 or so extant mammals.

But just when placental mammals evolved has always been in dispute. It is generally agreed that when the asteroid and other calamities killed off the dinosaurs 66 million years ago or so (except for those that evolved into birds), it opened up a world of ecological niches. Those openings fostered an explosion of mammals descended from those little shrew-like things that had been munching insects while waiting in the wings. Were placental mammals among them? Or did they come along later?

Dating the origin of placental mammals has long been a contact sport in evolutionary biology, and the fracas was recently renewed. The central issue is one that applies not just to mammalian evolution but to studies of evolution in general: What’s the best way to figure out when evolutionary events took place? By fossil evidence, fossils being dated often by the age of the geological strata they come from? Or by assuming that mutations in protein-coding genes occur at fairly regular intervals, and using the number of mutations in existing related organisms to serve as a kind of molecular timepiece?

This methodological dispute is nicely encapsulated by the headline on Ed Yong’s recent article about the age of placental mammals, which appeared in The Scientist. The headline: Clocks Versus Rocks. Yong described the latest volley in this long-running quarrel. It came from champions of genetic clocks, in the form of an open-access paper published in Biology Letters earlier this month.

This paper was a reponse to a major paper published last year in Science. The Science paper (also open-access, praise be) was an exhaustive comparison of fossil mammals, which showed that there are no fossils of indisputable placentals dating from before the mass extinction/dinosaur exit.

In a commentary at his blog The Evolving Placenta, Anthony Michael Carter puts the argument this way: “Thousands of nonplacental Cretaceous [i.e., before dino extinction] fossils are known so why are placentals absent?” Carter concludes, “[The Science] paper is co-authored by some of the most eminent specialists in fossil mammals. Arraigned against them we have some of the most competent molecular phylogeneticists. There seems little chance of compromise to judge from the acrimonious tone in this latest contribution.” Carter thinks the Biology Letters editors should have persuaded the authors to bring down the decibel level. But where’s the fun in that?

Absence of evidence is not evidence of absence

This new DNA paper argues that last year’s Science study itself implies that placental mammals were on the scene before the dinosaurs died despite the post-extinction fossil dates it presents. Because otherwise where did the post-extinction placental mammal fossils come from? The implication is a version of that cleverly phrased scientific truism: absence of evidence is not evidence of absence.

The new paper also made its own molecular clock calculations, coming up with a date range for placental origins of between 72 million and 108 million years ago, somewhat earlier than the standard previous clock estimate of 88-118 million years ago. If the lower end of the new range turns out to be accurate, that would bring genetic clock age closer to rock age than ever before. Placentals would have appeared just a few million years before the mass extinction of 66 million years ago, the blink of an eye in geologic time. Are the two sides creeping closer together?

As Ewan Callaway explains in his Nature article on the new genetic clock paper, an earlier critique (this one a technical comment in Science on the Science paper), made a similar argument. The comment also pointed out that if placental mammals appeared only after dinosaur competition was extinguished, the placentals’ explosive diversification would have required an explosive, but unlikely, speeding up of evolution. (Callaway’s article was reprinted at the Huffington Post, making it available to those without full-text access to Nature.)

Logic is on the side of the notion that placentals were already around to take advantage of the dino demise. But until somebody finds undeniable placental fossils from before the mass extinction, the clocks v. rocks argument is not going to be settled.

Callaway notes that this satisfying sort of resolution has happened in the past; genetic and fossil evidence can sometimes be reconciled by new finds. He cites a 10 year-old case involving the now-accepted divergence date of two primate species, bush babies and lorises. A genetics paper argued that they split 40 million years ago even though at the time the fossil evidence dated back only 20 million years. The older date was confirmed by new fossil evidence that appeared while the genetics paper was in press.