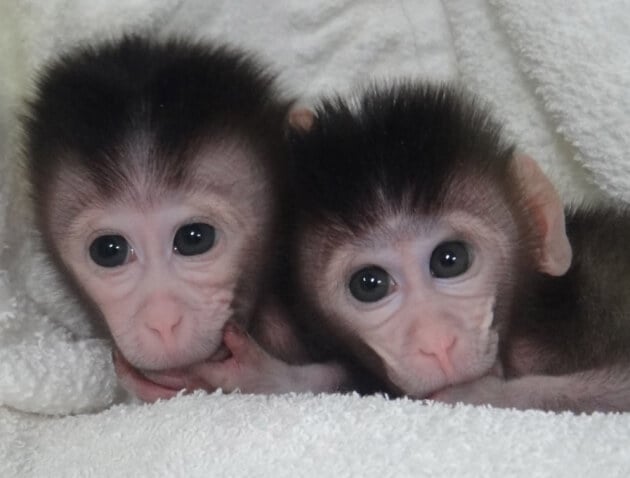 A new genetic modification technique that is generating unprecedented buzz among researchers and was on Science magazine’s list of “Breakthroughs of the Year” in 2013 has begun 2014 with a new milestone. These adorable macaques (upper right) are the first examples of primates whose genes were, um, monkeyed with using the technique. It’s  called CRISPR/Cas9, and I’ll decipher the acronym for you in a moment.

CRISPR/Cas is a new genetic engineering method that makes possible targeted modifications of almost any gene. Specific genes can be turned off, turned on, and/or edited. In the macaque research, Chinese scientists modified monkey genes that regulate metabolism, immune cells, stem cells, and sex. The immediate purpose is to figure out how to create models of human diseases in non-human primates. There are lots of model organisms that researchers use to study disease, notably mice. But for some kinds of disease research, especially neuropsychiatric disorders, animals more closely related to us would be preferable.

Although so far it has been used mostly in basic research, the potential applications of  the CRISPR/Cas system can hardly be overstated. The possibilities include genetic medicine and genetically modified organisms of all sorts: plants, animals, and even microbes to serve as living factories for producing drugs, biofuels, biodegradable plastics, and other green chemistry and biotechnology applications.

Genes can also be modified in groups, which will permit study of how combinations of genes and gene mutations affect function. This could have immense value in complex diseases like schizophrenia, where upwards of 100 genes that affect risk have so far been identified.

And the CRISPR/Cas methodology is simpler and cheaper than any other current approach to genome modification. No wonder researchers are excited about it.

The CRISPR/Cas system is actually a contemporary research adaptation of a very old invention, one that may date back nearly 3 billion years to the ancestor of all life on Earth. The original system is a microbial technique for what might be called self-vaccination. Members of the two microbial Kingdoms, bacteria and archaea, employ CRISPR/Cas as an adaptive immune system. The system fends off the kinds of disorders microbes get, the deadly damage wrought by invading viruses and bits of stray nucleic acids called plasmids.

The spacers are chunks of genomes from an invading virus. Microbes can add new chunks when they encounter new viruses. The spacers are a kind of stored memory of the invaders. Microbes use the spacers as search strings. They deploy an enzyme–for example, Cas9 (Cas = CRISPR-associated)–that matches the CRISPR spacer sequences to sequences in an invading virus and then cuts the virus at a targeted site. There are a number of Cas enzymes; Cas9 is the most popular with researchers at the moment.

Usually the cut the Cas enzyme makes destroys the virus. But, as Anne Buchanan explains at The Mermaid’s Tale, researchers can also deploy different enzymes, enzymes that repair the cut–and, while they’re at it, can also insert whatever sequence the researchers desire.

So CRISPR/Cas might be a tool for gene therapy, a real cure for genetic disease. That possibility prompted a group of high-profile researchers to found a new company, Editas Medicine, just to exploit the gene therapy potential of the CRISPR/Cas system.

CRISPR/Cas can disable a disease-causing gene. But it could also supply a therapeutic gene. In December researchers reported doing just that in stem cells taken from a cystic fibrosis patient.    The researchers say the corrected gene was expressed and functional in the cells. Cystic fibrosis is the second most common single-gene disease in the US.

Some other possible CRISPR/Cas system applications

One way researchers find out what a protein-coding gene does is to turn it off and see what happens when no protein is made. A favorite technique for doing that is known as RNA interference, but RNAi doesn’t shut down 100 percent of the gene targets. CRISPR/Cas9 does, depleting the target protein completely.  So the system is potentially more useful than RNAi for studying gene function.

CRISPR/Cas9 can also target noncoding sequences. A paper just published in Scientific Reports describes using the technique to inhibit microRNAs, a class of highly conserved non-coding regulatory factors believed to control fully half the protein-coding genes in mammals. MicroRNAs also figure in human disease. Protein-coding sequences—what we generally mean when we say “gene”—amounts to only 2 percent of the human genome.  The CRISPR/Cas system might give scientists a window on the other 98 percent.

At PhysOrg, Matt Shipman recently reported on researchers at NC State who have turned the CRISPR/Cas system into “smart bombs” that target specific disease-causing bacteria without harming benign bacteria. What’s particularly intriguing about this work is that it might lead to CRISPR/Cas methods of forcing antibiotic-resistant bacteria, the ones that have become the scourge of medicine, to self-destruct.

So the CRISPR/Cas system might accomplish a near-unbelievable list of good things. It has some distance to go, however, for reliable practical applications. For example, despite its precision, the Cas9 enzyme is not always precise and specific enough–sometimes it cuts the wrong gene. Researchers are investigating ways to increase its specificity.

Also, there is competition, TALENs and zinc finger nucleases. They have disadvantages compared with CRISPR/Cas, but they are well-established gene editing techniques with a track record.  Susan Young explains all three systems and some applications  at Technology Review.

Nor is genetic engineering with the CRISPR system reliably flawless yet. In the monkey research, investigators targeted genes in 180 monkey embryos and implanted 83 in surrogate mothers. But they have so far reported only this one success, resulting in twin genetically modified monkeys. They don’t yet know if the process affected the monkeys’ physiology or behavior, nor if these GMOs will eventually produce descendants that are also GMOs.

And then there are the ethical issues. The macaque paper prompted outrage from animal rights activists who are particularly incensed at the exploitation of non-human primates in medical research. In an io9 Rant (the Rant is a regular io9 feature), George Dvorsky forecast, “Eventually, researchers will be able to create monkeys with more serious conditions. More serious human conditions — like autism, schizophrenia, Alzheimer’s, and severe immune dysfunction.” Monkey models for human neuropsychiatric disorders are one stated goal of the researchers.  You don’t have to be an activist or opposed to animal research to find that particular picture troubling.

The CRISPR/Cas system might also make it simpler to create genetically modified humans. At In the Pipeline, pharma researcher Derek Lowe’s  thoughtful post mulls over a number of places this technology might take us. Among other speculations, he thinks the monkey genetic engineering project shows that the technique is very likely to work in humans. “In vitro fertilization plus CRISPR/Cas9 – neither of these, for better or worse, are all that hard to do, and my guess is that we’re very close to seeing someone try this – probably not in the US at first, but there are plenty of other jurisdictions,” he says.

On a commercial forecasting note, Lowe thinks the CRISPR/Cas system, or some other (relatively) simple gene-editing system offered by a start-up like Editas could eventually destroy the business model of companies that are trying to cure rare metabolic disorders in just a few patients at very high cost.

He also points out that it’s only a short step from fixing what’s wrong to enhancing what’s already there. “[I]t all depends on where you slide the scale to define ‘wrong’. More fast-twitch muscle fibers, maybe? Restore the ability to make your own vitamin C? Switch the kid’s lipoproteins to ApoA1 Milano?” (This last is an Apo variant that greatly reduces the risk of heart disease, and which of us would turn that down?)

Lowe is confident that “we’re going to rewrite the genome to suit ourselves, and sooner than later. The reward will be treatments that previous eras would have had to ascribe to divine intervention. . .”  That is this month’s version of a prediction we’ve been hearing for years. Only this time the CRISPR/Cas system is promising to hurry up the rewriting of genomes, our own included. Maybe it’s time to take it seriously.