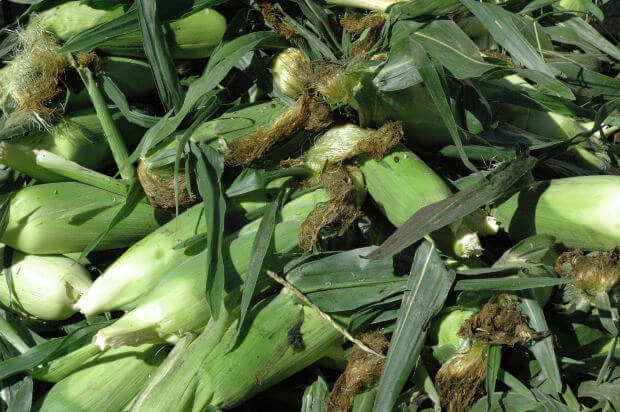 Tell me again, who is our customer?

I’ve often heard that farmers “push” genetically modified (GM) grain on the market, and that many of us won’t plant anything else.  That’s just not true, and I addressed that in a previous blog on the Genetic Literacy Project: no company is forcing farmers to buy genetically engineered seed.

I’ve also heard many people criticizing farmers for not listening to our customers, particularly families that are demanding that we grow non-GM food. All I can say is: our number one responsibility is to please our customers and we are listening carefully to what they want us to grow. Here’s how.

For arguments sake, let’s define our customer as the next person who is downstream in the supply chain that goes from the farmer to the family dinner plate. An argument has been made that our customer is the consumer, but in truth that is not always true. The end-user may be the consumer, but few farmers sell directly to consumers. For most of us, our customer is our grain buyer. In my case, most of our soybeans are sold through Cenex Harvest States, a farmer-owned co-op that owns a nearby river terminal, and our corn is split between the same CHS terminal and Grain Processing Corporation, a local corn processor.

From a producer’s standpoint, there are several types of customers, although most operations generally just deal with commercial sale of both grain and/or livestock. We do both here at Walton Farms: we sell a bit directly to families but most of our sales are to grain buyers and area processors. We raise corn, soybeans, hay, beef cattle and sheep for commercial sale. We also raise a small amount of sweet corn that we recently began to market directly through a small roadside stand and beef that we sell directly to the consumer. It’s a hybrid system that works well for us, and one that allows me to hear directly from both purchasing channels. I love to talk to my customers and try to understand exactly what they want from me, the producer.

Now, don’t get me wrong. I think all farmers are conscious of the end-user, the consumer, but consumers generally aren’t buying directly from us.  Farmers tend to focus on who they sell directly to, be it end-user, processor, exporter, etc. We also do the best we can to produce what our customers demand. It doesn’t do us much good to produce food someone doesn’t want to buy. For example, if I grow a variety of sweet corn that isn’t appealing to our roadside stand customers, this happens: 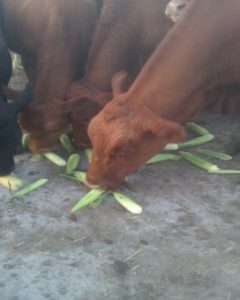 Sure the cows are thrilled at this sweet treat, but unsold sweet corn is pretty damn expensive feed.

I ran a bit of experiment this year and planted both non-GM and GM sweet corn. We wanted to see first-hand if it was worth the extra expense. The GM sweet corn seed is about three times more expensive than the current non-GM seed we plant. However, it is tolerant to the herbicide glyphosate and contains the Bt gene, which allows the plant to produce a natural pesticide that protects the crop against several pests, including the nemesis of any sweet corn producer, the corn earworm. It ensures that this doesn’t happen (note the ear on the right with earworm damage): 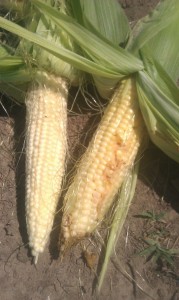 To protect against earworm, and the resulting economic loss, we have two choices; we can apply multiple insecticide applications or use a GM corn. In 2013, I chose both options.

To test the opinion of the customer, at the roadside table we clearly marked each variety by name, type of corn (yellow, bi-color, etc) and whether it was non-GM or GM. To make sure we didn’t bias our own little market test, we priced all the corn exactly the same.

Interesting conversations followed. Initially, consumers were reluctant to try the new GM corn because they didn’t know much about it. There were no discussions by our customers about its safety. Maybe Iowans are just that smart, I don’t know, but it never came up. If it did, it was not a difficult conversation to have as the safety of GM crops has been well established by independent international science and regulatory agencies, as the Genetic Literacy Project has reported.

Our roadside customers chose the old standbys like “Bodacious” and “Incredible” mainly because they knew how they would taste and they were familiar to them. When asked to try the new GM sweet corn, “Passion,” the questions were always about taste, kernel color or what stage of maturity it was and not whether it was genetically modified.

Something very telling happened next… they liked it! The variety “Incredible” has always been the gold-standard for that sweetcorn taste. Although “Passion” didn’t quite match the taste of “Incredible” in the eyes of our consumers, they liked other things about “Passion,” such as the larger ear size, deep kernels and — best of all — no insect damage! “Passion” gained fans as the season went along; our customers returned for it, in fact.

That settles it. In 2014, based on customer demand, we are going to grow a mix of the old stand-bys “Peaches and Cream”, “Incredible” and the new GM sweet corn, “Passion”.

So where does this leave those who do not purchase directly from farmers? In an increasingly loud voice from what seems to be a vocal minority, some consumers—the final customer—are asking food companies for non-GM products. They also are saying they want farmers to produce the grain to supply them. But my customer, the grain processor, is not asking me to produce non-GM grain in any increasing quantities.

Why, considering the loud outcry from some consumers, are the processors and grain buyers that I sell to not asking for more non-GM or organic?

According to the Environmental Protection Agency, only about 12% of all corn produced goes to make food for humans. Most of that goes to make sweeteners, high fructose corn syrup, starch products and alcohol. Only 1.8% goes to direct-to-consumer foods, such as breakfast cereal, tortillas, corn chips, hominy etc.

Overall, 88% of our corn is used for livestock feed, industrial use and ethanol for fuel. What that means is that in the traditional grain delivery system, 88% of our customers—mostly grain buyers— are asking for corn but they are not asking for non-GM or organic grain in any great quantities.

Farmers have listened to our biggest customer, grain buyers, grain processers, and livestock producers. They purchase the vast majority of our corn and farmers have responded to their needs. Corn, and lots of it, grown in a sustainable manner to assure a consistent supply for the future.

Dave Walton, a contributing columnist to the GLP, is a full-time farmer in Cedar County Iowa, growing GM and non-GM corn, soybeans, alfalfa and pasture on about 500 acres of the world’s most productive soils.