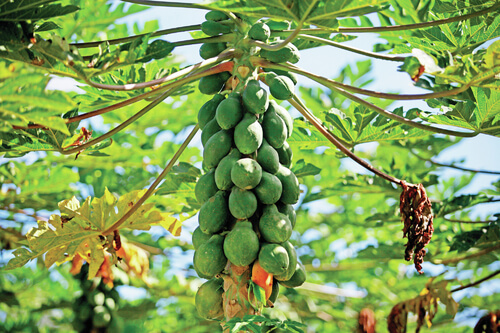 In Hawaii there is considerable anti-GMO sentiment largely occasioned by lack of accurate information. The opposition to GMOs has become confounded with opposition to the use of chemical pesticides. At a recent special meeting on pesticides on the North Shore of the island of Oahu, a local anti-GMO activist, Hector Valenzuela, made the statement that the use of GMO crops represented a “pesticide centered technology.”

This is a totally false statement; nothing could be further from the truth!

One of the main characteristics of GMO crops is that they are resistant to insects. This is because they contain a minute amount of a protein that prevents destructive caterpillars and beetles from feeding. This protein, known as Bt, is derived from a bacterium that is widely used by organic growers to kill caterpillars. As a result, these insect-resistant crops can be grown with much less insecticide use, resulting in less insecticide exposure to both the farm workers and consumers. Worldwide, these Bt crops have resulted in a 37-86 percent reduction in insecticide use (for Bt cotton or Bt corn respectively).

Dr. Roger Beachy, a prominent leader in this field, tells the true story: “I got into biotech because I wanted to reduce the use of pesticides”. Dan Steiner, an independent crop consultant in northeastern Nebraska pointed out on NPR’s Morning Edition (7/9/2014): “We used to get sick [from the chemicals].” But then the insect-resistant crops arrived, seriously cutting insecticide use. “Ever since then, we feel good every spring!” says Steiner.

Scientific studies have shown that there is an increase of non-pest insects in crops in contrast to conventional agriculture. In addition, rivers in areas where biotech crops are grown have less chemical residues in the water and a healthier aquatic environment.

The other main biotech character imparted to GMO crops is herbicide tolerance. Herbicide-tolerant crops enable the use of more benign herbicides that have much less environmental impact. Glyphosate (Roundup) only affects plants and not humans, animals or bees. Moreover, glyphosate is rapidly broken down in the soil. Roundup can be found in any garden center for general home use because it is regarded as safe.

Other crops, such as genetically-engineered papaya, possess resistance to disease using a process akin to vaccination in humans.

Genetically engineered crops are safe to grow and eat. Humans have modified plants for centuries, the science is known and understood, and genetically engineered are the most studied crops and foods in history. GMO crops have been consumed for over 17 years with no ill effects; there is not a single documented case of illness or allergy caused by GMO crops.

Valenzuela also claimed that GMO crops are rejected by scientists, which is not the case. Such claims refer to a fringe group of scientists, not the main scientific establishment. This is akin to the 3 percent of scientists who deny the existence of climate change. GMO crops have been extensively examined by every major science and food safety authority in the U.S. and abroad, including the European Union. These authorities, which include the National Academy of Sciences, American Association for the Advancement of Science and American Medical Association, have declared them to be as safe as non-biotech crops of the same species, both for food and for the environment.