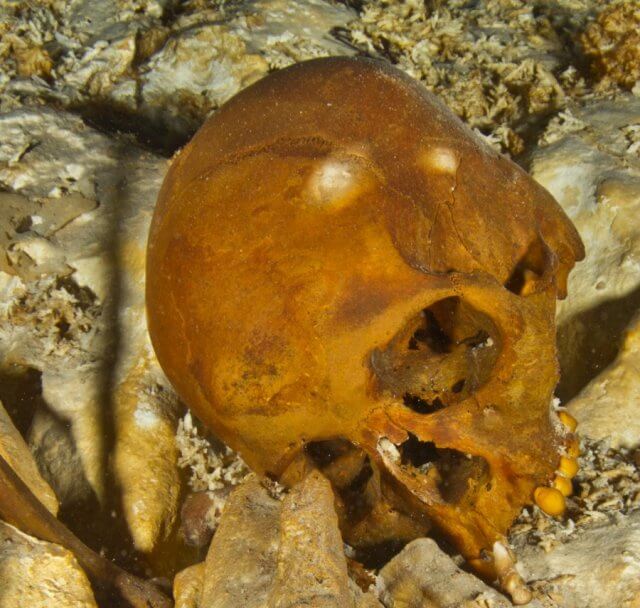 Meet Naia, the 4’10” teen whose DNA is helping scientists bury theories that the Americas were first settled by people from more than one place in Asia. She is also rendering even more unlikely the improbable notion that the first American immigrants were Europeans who crossed the Atlantic well before 1492—more like 14,920 years ago, or even earlier.

Thirteen thousand years ago, when she was about 15 years old, Naia fell into a deep pit in what is now the Yucatán peninsula in Mexico. The fall broke her pelvis, and, scientists say, she died quickly. Other large animals suffered the same mishap. Animal bones found in the same place came from ancient cave bears and even a saber-toothed tiger.

The pit was part of a cave system that flooded when sea levels rose after the ice age. She was found accidentally in 2007 by scuba divers exploring the caves. They called her Naia, the Greek word for water nymph.

The story of the find and of how the research was accomplished is “a completely awesome exercise in underwater archeology,” as Ars Technica put it. It involved immense technical challenges, such as analyzing DNA and dating bones that have been under water for thousands of years.

A gift to ancient DNA studies and paleoanthropology

Despite the challenges presented by her watery grave, Naia’s misfortune has been a gift to paleoanthropology in the Americas. Hers is by far the most complete Paleoamerican skeleton yet recovered.

Studies of DNA extracted from her molar reinforce the prevailing idea that a single migration from Asia peopled the Americas. The DNA also suggests that evolution is the reason some anatomical features of the oldest human remains in the Americas, including Naia’s, do not much resemble today’s Native Americans—even though the latter are presumed to have descended from them.

The genetic evidence so far tells us that Naia’s people were indeed among the ancestors. Her mitochondrial DNA, inherited from her mother, is haplotype D1. (A haplotype is a combination of specific gene variants that are neighbors on a strand of DNA and so are inherited as a group.) The D1 haplotype is found only in the Americas. It is present in about 11 percent of today’s Native Americans and nearly 1 out of 3 in Chile and Argentina, according to geneticist Deborah Bolnick, one of scientists who studied her DNA.

Haplotype D1, unique in the Americas, is believed to have evolved while the Asian immigrants were settled temporarily on the Beringian land bridge. (This sojourn is known by a grandiose name: the Beringia Standstill Hypothesis.) Once upon a time, this land linked Asia and the Americas across the Bering Sea, providing a temporary route from one continent to the other. Beringia is long gone, sunk beneath the waves when the Ice Age melted.

Haplotype D1 is a nice example of recent human evolution leading to the genetic differences that developed as Homo sap migrated to five different continents in the past 50,000 years or so. Many of those small genetic changes are the source of what we now call racial differences. I talked about those differences here last week in my review of the new Nicholas Wade book A Troublesome Inheritance: Genes, Races and Human History.

Recent human evolution in the Americas also explains why Naia looks much like other Paleomerican remains rather than like modern Native Americans even though her mtDNA shows that she is related to them.  She had a much narrower and more projecting face than contemporary Native Americans, with much wider-set eyes and a more prominent forehead, according to forensic anthropologist James C. Chatters.

Says Chatters, first author of the Naia paper, which appeared last week in Science, “Paleoamericans and Native Americans descended from the same Beringian source. The differences between them likely arose not from separate origins but from evolution that occurred after the Beringian gene pool became separated from the rest of world.”

The fact that it is Chatters who said this is pretty significant. He is a new convert to the idea of a single American migration. It was Chatters who, two decades ago, was the first paleoanthropologist to study Kennewick Man, a 9000 year-old skeleton found along the Columbia River in Washington State. Kennewick Man’s skull shape, so different from today’s Native Americans, persuaded Chatters (and a number of other scientists) that Paleoamericans came from at least two places in Asia.

But Naia’s mtDNA changed his mind. Despite her distinctive face, the D1 haplotype identifies her as a descendant of the Beringian immigrants, just like today’s Native Americans. “What this study is presenting for the first time is the evidence that Paleoamericans with those distinctive features can also be directly tied to the same Beringian source population as contemporary Native Americans” Bolnick said at a press conference.

Chatters and Bolnick and their colleagues now believe that the changes in skull shape are probably part of recent evolutionary changes in skeletal structure among Native Americans, not evidence of separate migrations. The reasons for the changes are not known. They may be adaptations to different food, or to new social or environmental conditions, Chatters says. As Wade’s book pointed out, these are the sort of swift evolutionary changes that have happened to human migrants on the other four continents too, in just the last 10,000 years or so.

Comparing Mexico’s Naia and the Clovis baby from Montana

At the press conference, Bolnick compared Naia with a Paleoamerican find reported in February, a baby boy who was almost Naia’s contemporary. Anzick-1 lived (and died) about 12,600 years ago but very far away from Mexico, in Montana.

Anzick-1 is noteworthy for a couple of reasons. The boy has yielded the oldest complete Paleoamerican genome. His Y chromosome is common in contemporary Native Americans, and the rest of his nuclear genome resembles them too. They are clearly related.

Anzick-1 is also the only known human burial associated with the Clovis culture. Clovis is the oldest widespread archaeological complex in North America, known for “Clovis points,” fluted stone projectile points made to be fastened to spears, and for distinctive bone and ivory tools.

Naia’s remains are not associated with any cultural artifacts, so it is not known whether her people were part of the Clovis complex, Chatters said at the press conference. Anzick-1’s mtDNA is not Naia’s all-American D1 but the haplotype known as D4h3a. It is rare in today’s Native Americans but is believed to be one of the mtDNA types the founding immigrants carried from Asia into Beringia. Whether his skull resembled those of other Paleoamericans is not known; he was just a baby, and his remains are fragmentary.

Other theories about American migrations

Bolnick pointed out that the two finds, Naia and Anzick-1, argue that a single major migration from Asia to the Americas is likely. But they don’t prove it. The scientists will be analyzing Naia’s nuclear DNA. That will reveal more about her ancestors and also make possible comparison with the Clovis baby from Montana.

Other theories postulate early entry into the Americas by different groups of people. Stone tools from Brazil have been dated at 22,000 years ago. A Brazilian skull dated at 11,000 years ago is said to resemble Australian Aborigines more than Asians. A Texas site known as Buttermilk Creek has yielded tools that are not of the Clovis type. They are dated at 15,500 years ago.

And then there is the so-called Solutrean Hypothesis, which argues that Europeans crossed the Atlantic before the ice melted, bringing stone tools that were the earliest forms of Clovis tools–and also bringing European DNA. But recent paleontological finds I described here last fall explain how what seems like European DNA got into Native Americans long before 1492. It didn’t come across the Atlantic. It came through Beringia.

I suppose it’s possible that any (or all) of the non-mainstream ideas about settlement of the Americas might be true. But if so, other migrations don’t seem to have had much genetic impact on Native Americans. What genetic evidence there is so far reinforces archaeological evidence and conventional wisdom. The most recent version of the standard theory was described by Bolnick and Jennifer Raff in a February Nature commentary:

“We know that humans had moved into northwestern Beringia from Siberia by 32,000 years ago. Sometime between 26,000 and 18,000 years ago, these people expanded into eastern Beringia and evolved genetic characteristics unique to Native American populations. By 17,000 years ago, deglaciation of the Pacific coastline allowed a southward coastal migration, bringing the first Americans to Monte Verde in Chile by 14,600 years ago.”

Meanwhile, Naia’s remains are still being investigated. Some of her bones remain in her watery Yucatán tomb, but others (including her distinctive skull) were removed to a lab for safekeeping after the bones were disturbed by curious divers who were not part of the research team. Scuba tourists.

In addition to her genome, the plans are to study her bones for evidence of how she lived. Naia’s small frame and many tooth cavities suggest that she ate mostly fruit and little protein. She was probably hungry much of the time. Naia, it appears, had a hard life as well as a hard death.