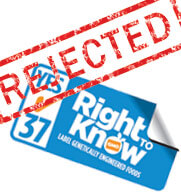 Europeans and and those in many other countries that consider themselves “liberal minded” scratch their heads over why there is such a big controversy in the United States over the labeling of foods that contain genetically modified ingredients. Sixty-four nations around the world have enacted mandatory labeling laws.

“GM foods are not proven safe. Why not just label them and let the consumer decide?” is a common thread on food blogs. “They must be kowtowing to the GMO lobby.”

That’s what has been characterized as the liberal position: the consumer’s right to know. Many activist groups lobbying for labeling cite a New York Times poll that 93 percent of Americans support it.

So why do the leading independent science organizations in the U.S. and the country’s top liberal news publications oppose mandatory labeling?

The federal government has resisted calls to label GM foods on the grounds that there is no substantial difference between them and conventional or organic food. That’s the correct scientific position. Genetic modification is a process. There is no detectable difference between, say, sugar made from GM or organic sugar beets. The seeds of the GM variety are engineered to tolerate glyphosate, a much less toxic chemical than ones previously used on beets, and less toxic than some organic herbicides.

The pressure for labeling is coming from legislatures in liberal states such as New York, California, Oregon and Massachusetts, where anti-GMO factions are lobbying relentlessly. Earlier this year, Vermont became the first state to require any genetically modified foods to carry a label, although it is being challenged in court. It likely won’t be the last state. Oregon and Colorado voters will decide on a similar measure in November and about 25 other states have proposed mandatory labeling legislation this year.

But a curious thing is happening. The most enlightened liberal thinkers and the progressive publications in key states are joining with the science establishment to oppose mandatory labeling.

The pro-labeling arguments, they say, boil down to two deceptive talking points: GMOs may be unsafe and are untested—the Frankenfood argument; and GMOs are part of a corporate plot to monopolize the food system—the Argumentum Monsanto, according to science writer Brian Dunning.

Neither is supported by the evidence. [A] labeling requirement would only serve to confuse consumers,” editorialized the Boston Globe, on July 30, becoming the latest progressive publication, to oppose a statewide measure. “Advocates say it would alert those who may object to genetically modified foods to choose other options. But the mere fact of a label would contribute to the stigmatization of food that is actually perfectly healthy. Besides, there’s already an easy solution for the GMO-wary buyer: Labels that tout foods that are not genetically modified.”

The most strident opposition to labeling is on science grounds. As the Washington Post wrote in June, “There is no mainstream scientific evidence showing that foods containing GMOs are any more or less harmful for people to consume than anything else in the supermarket, despite decades of development and use.”

[T]here is no reliable evidence that genetically modified foods now on the market pose any risk to consumers,” The New York Times has noted.

Even the uber-liberal Nation has softened its tone. In an article released just last week, Madeline Ostrander embraced the argument, rejected by anti-GMO activists, that agricultural biotechnology can play a critical role in addressing global food security, and in a sustainable way.

The U.S. Congress has so far rebuffed attempts at mandatory national labeling in part because every major science organization in the world, citing hundreds of independent studies, from the World Health Organization to the German Academy of Sciences, with many overseen by the European Union, have issued statements reassuring the public about the safety of GM foods and the independence of the global food supply.

While conventional breeding swaps giant chunks of DNA between one plant and another, genetic engineering is far more precise, is less likely to produce an unexpected result, and is pre-tested and monitored after release. Many of the very same organizations that have publicly stated the dangers of global warming have noted that GM foods are as safe or safer than conventional or organic foods.

Related article:  How Bayer-Monsanto merger might impact research efforts to find alternatives to the herbicide glyphosate

They are also more sustainable in many cases because they require lower “inputs”—some GM crops are engineered to use natural bacteria to repel pests, all but eliminating the use of toxic insecticides—and result in higher yields. About-to-be-introduced vitamin enhanced or toxicity reduced GM foods such as cassava, rice and potatoes will offer consumers clear nutritional benefits.

Scientific American, long regarded as one of the most independent science sources in the world, in its editorial “Labels for GMO Foods Are a Bad Idea,” made the case that labeling will spread scientifically inaccurate information that could harm human health and slow the development of agricultural biotechnology—which while not a silver bullet could play a key role in increasing the global food supply as population pressures escalate in coming decades.

“Antagonism toward GMO foods also strengthens the stigma against a technology that has delivered enormous benefits to people in developing countries and promises far more.” SA wrote. “Ultimately, we are deciding whether we will continue to develop an immensely beneficial technology or shun it based on unfounded fears.”

None of these arguments is apt to sway committed opponents of biotechnology. Just do it, they say; it’s as simple as printing a label, and it has worked in Europe.

Scientists, and increasingly independent liberal thinkers, are opposed to mandatory labels precisely because scientists don’t want to replicate what’s happened in Europe: a lack of choice of foods, consistently higher food prices, and an increase in the use of more toxic pesticides, all because GMO foods are shunned.

The stigma encouraged by opponents of agricultural biotechnology comes at a high price, say some independent researchers. A recent joint study by epidemiologists and economists examining the costs of not deploying this technology in a country like India estimated that it’s cost billions of dollars and 1.4 million life years over the past decade in that country alone.

The most prominent labeling supporters in the U.S. — all backed by the large and growing organic food lobby, who know that the driver of consumer sales is the unsupported belief that organic foods are safer and more nutritious—have made it quite clear that the consumer choice is not top of their consumer rights wish list.

“If we have it labeled, then we can organize people not to buy it,” notes Andrew Kimbrell, head of the Center for Food Safety. “GM foods must be banned entirely, but labeling is the most efficient way to achieve this,” says Joseph Mercola, a wildly popular web based natural products entrepreneur whose income depends on selling alternative health products.

What about that poll that shows that more than nine in 10 consumers want labeling? It’s less than meets the idea. When American consumers are asked a less loaded question — whether there is any additional information that would like on their labels that’s not there now — only 4 percent said they support labeling.

The leaders of the labeling movement play the ‘right to know card’ as a subterfuge to scare people about the safety of the conventional food system and to divert attention from the sustainability benefits of GMOs. They want to kill crop biotechnology. “With labeling, [GMO’s] will be zero,” says Vandana Shiva, the Indian activist best known for promoting the false belief that GMOs have resulted in mass genocide in her home country.

Are there tradeoffs in adopting crop biotechnology or large-scale agriculture? Of course, and there is room for healthy dialogue. But make no mistake: Food safety and transparency are not on the pro-label groups agenda in the United States.

Jon Entine, executive director of the Genetic Literacy Project, is a senior fellow at the Center for Health & Risk Communication and STATS (Statistical Assessment Service) at George Mason University. You can follow @JonEntine on Twitter.