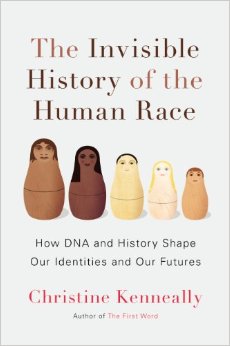 In her new book The Invisible History of the Human Race, Christine Kenneally seems ambivalent about personal genome sequences. On the one hand, she has had her own done, endorses the idea, and notes that if we all had our genomes sequenced and linked them to everyone’s historical information, “it would be the nearest thing to the book of humanity.” But she also points out that there are many ethical, social and policy worries about genome analysis: “insurance issues, privacy issues, health issues, and questions about how the whole industry will develop.”

How direct-to-consumer genome sequencing will develop is certainly a big unknown. In 2010 Kenneally had her DNA analyzed by deCODE Genetics, the Icelandic company. In 2012, deCODE was sold to the biotech/pharma Amgen. In May of this year, she says, she could still access her online analysis although there had been no updates. She wonders what will happen to it in ten years, or a hundred. She warns, “[W]hile any company can be shut down, your DNA sample may live on and it will point to you forever.”

We can’t assume that the needs of commerce will mesh with our own, or that the promises these companies make to their customers about privacy are engraved in tablets of stone. The phone companies caved in easily to the National Security Agency’s demand for universal access to our calls. It is no less possible that some government agency will demand access to our genomes, or that there will be profit in selling that information to others. For that matter, what bad uses might the genomic data held in open databases be put to in the future? Just because it’s hard to imagine such uses now doesn’t mean one won’t occur to somebody some day.

The Irish lived near-exclusively on the island we now call Ireland for thousands of years until the potato famine struck in the middle of the 19th century. Now, Kenneally says, less than 200 years later, 70 million people worldwide claim Irish descent, and only 5 million of them live in Ireland.

Genomics can not only record the fact of the migration and mixing of different peoples, she notes, but also something of how it happened. Today’s Native American Y chromosomes are predominantly of European origin, but the mitochondrial DNA, passed by mothers on to all their children, is Native American.

It’s not hard to envision what happened: European colonists, nearly all men, arrived in the Americas, slaughtered Native American men, and “mated with”–my interpretation of that phrase is that they raped–Native American women. The result was male infants with European Ys and, just a few hundred years ago, a wholesale resculpting of Native American genomes.

Kenneally also tackles the idea of race, a fraught topic particularly this year because of Nicholas Wade’s book A Troublesome Inheritance. She seems quite sensible on this subject to me, but doubtless will rile those who want to deny that race exists.

Her argument, in sum: All people are the same human species and are genetically quite similar to each other. She quotes geneticist Marcus Feldman as saying that the genetic differences between any two people amount to about 1/10th of 1% of the genome. Still, burrowed into deeply enough, our genomes do reveal “race” in the sense of what continents our ancestors came from.

It is perfectly true, as the deniers of race contend, that if you look at a few hundred chunks of DNA in two people of different “races,” they will often be more similar genetically to each other than to others in their self-evident racial groups. But if you compare the two on thousands of genome bits instead of hundreds, their genomes will more strongly resemble other members of their own population group.

Thus, discerning racial ancestry in the genome is entirely a matter of the resolution employed. And of course in many cases we don’t need to examine genes to know that a person’s ancestors were African or Asian or European–or a racial mixture.

In many cases. But nothing makes clearer how nutty our ideas of race are than the story of Sally Hemings, the slave who bore President Thomas Jefferson’s children. As Kenneally recounts, Sally Hemings’s mother had a white father and black mother. Hemings also had a white father herself–in fact her father was also father of Martha Wayles Jefferson, the president’s wife.

Yowsa. Yet Hemings was defined as a black slave even though 3 out of her 4 grandparents were white and she was half-sister to the white president’s white wife. Two of her sons by Jefferson, both with 7 white great-grandparents and only a single black one, lived out the two definitions of race. One moved to Wisconsin and lived as white, as did his descendants. The other identified as black, and so did many of his descendants.

What is this book about?

I’m not sure why Kenneally’s new book is titled The Invisible History of the Human Race. Perhaps because she has done a deep dive into academic research, especially research on human genomics, and that’s a realm invisible to most people.

In fact, Kenneally’s research into research is a huge strength of this book. She has delved into investigations not just of DNA but a smattering of other fields like economics. Many of these have not gotten much media attention. Another form of invisibility.

She’s also admirably up to date; some of her source material is from papers published this year and at least one, on UK genomics, hasn’t yet appeared. (I know that because I’ve looked for it.) That’s remarkable in a book, a “real” book made of paper and ink and between hard covers.

But–you knew there was a “but” coming, didn’t you?–I kept looking for an organizing principle, a thesis, a line of reasoning. What I found was a prodigious amount of work leading to a well-written and often fascinating collection of . . . miscellaneous stuff.

Some of the topics: Genealogy as a research tool. Population genetics. History, including a history of the Eugenics Movement and its monster offspring, the Third Reich. Anthropology. Sociology. Paleoanthropology. What we know about human migrations, ancient and modern. Medical genetics. A dab of behavioral genetics. And more. But most of them curiously disconnected from each other.

I guess Invisible History works as a trustworthy but idiosyncratic and unsystematic once-over-lightly about a lot of work going on at the moment, most of it connected in some way with human genetics.  But Kenneally doesn’t do much to tie those tales together, to fashion what she’s telling us into a coherent line of argument. The book reads a bit like a collection of unrelated magazine pieces–which, I gather from the Acknowledgements, is in part what it is. The title promises more.

Having unloaded that critique, let me hasten to concede that, although I do think a book ought to have an organizing principle, I have no suggestions for what a coherent line of argument about today’s investigations into human genetics might be. They are nothing if not miscellaneous.

They are also provisional, which makes them hard to write about. Readers don’t like provisional. They don’t like caveats. They don’t like continual reminders that what they are learning might well turn out not to be true or at the very best is only part of the story. But it’s useful to remember that much of what we are being told about human genetics is tentative and/or partial. And will be for many years.

Labs must now share your genome data with you–But do you really want it? Genetic Literacy Project