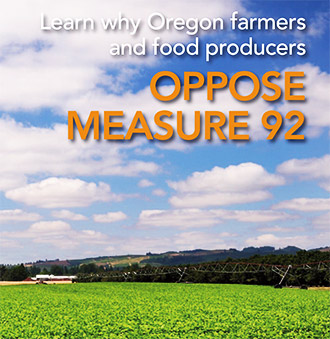 Following a similar script from California and Washington state, support for the mandatory GMO labeling initiative is losing support as the vote nears.

The measure was trailing 48 to 42 in a survey of 403 likely voters conducted over Monday and Tuesday by independent Elway Research of Seattle and commissioned by The Oregonian and KGW. Seven percent of respondents said they were undecided. The poll had a margin of error of 5 percentage points.

“We’re delighted, of course,” said Dana Bieber, a spokeswoman for the No on 92 Coalition, “but it’s exactly what we’ve said all along — the more people know about Measure 92, the less they’re going to like it. That’s what this poll demonstrates.”

Measure supporters, buoyed by a sizable lead just a few weeks ago, challenged the poll results, saying its not capturing the true sentiment of Oregon voters.

“That’s not where we think the race currently stands,” said Sandeep Kaushik, communications director for the Yes on 92 campaign. “We have known from beginning we were going to get vastly outspent and this would be a close election. We continue to think that’s the case and that we’re in a good position to win.”

Supporters of the measure have raised almost $7 million while opponents have more than double that, just over $16 million, on hand. It’s the the costliest ballot measure fight in Oregon history.

A poll released in July by Oregon Public Broadcasting put support for GMO labeling at 77 percent. But as was the case in the two other western states that voted on labeling bills, the more voters learned about the law and the science behind genetically modified crops and foods, the more supporter eroded.

In 2002, Oregon became first state to try and pass a GMO labeling initiative—Measure 27 lost by a margin of more than 2 to 1.