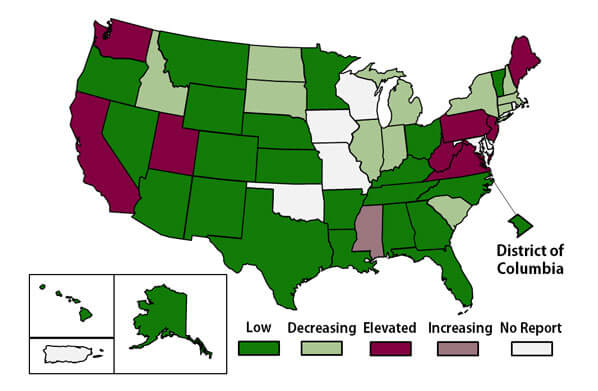 Polio is the most famous enterovirus but there are about 100 others in circulation. Enterovirus D68 (EV-D68), first identified in California in 1962, had a surge of cases in 2014, 1,105 cases in the last few months. It can cause severe respiratory illness in young children, with some patients requiring hospitalization.

To promote new research, researchers have sequenced the genome of enterovirus D68, sampled from patients treated at St. Louis Children’s Hospital. The results appear in Emerging Infectious Diseases and have published the DNA sequences in GenBank, an open-access database maintained by the National Institutes of Health (NIH).

The new sequencing data, produced by The Genome Institute at Washington University, includes one complete genome sequence and eight partial sequences taken from patient samples. Further, scientists at the Centers for Disease Control and Prevention (CDC) contributed to GenBank seven complete or partial sequences of enterovirus D68 sampled in the Midwest. 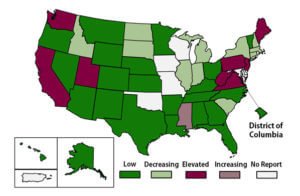 Enterovirus D68 instances for the most recent week. Credit: CDC

“Having the DNA sequence of this virus enables additional research,” said senior author Gregory A. Storch, MD, the Ruth L. Siteman Professor of Pediatrics at Washington University in St. Louis. “It can be used to create better diagnostic tests. It also may help us understand why this epidemic seems to be producing severe and unusual disease, and why it’s spreading more extensively than in the past.”

The new sequencing data includes one complete genome sequence and eight partial sequences taken from patient samples. Scientists at the Centers for Disease Control and Prevention (CDC) contributed to GenBank seven complete or partial sequences of enterovirus D68 sampled in the Midwest.

Storch said routine laboratory tests can’t identify specific enterovirus strains. Most hospitals and clinics only can perform tests to determine if a patient has a virus that fits broadly into the enterovirus/rhinovirus category. In the new study, Storch and his colleagues analyzed 14 patient samples testing positive for enterovirus/rhinovirus. Of those, nine were identified as enterovirus D68 using specialized laboratory techniques developed at Washington University and St. Louis Children’s Hospital. The remaining five samples were other respiratory viruses.

While many children may contract enterovirus D68 and never know it because symptoms are mild, others may require hospitalization to support their breathing. Children with a history of breathing disorders such as asthma are at higher risk of severe disease.

“There is currently no specific treatment and no vaccine for this virus,” said Storch, who treats patients at St. Louis Children’s Hospital. “But having the DNA sequence available helps work toward both of those goals.”

The data also allow comparisons between strains circulating in different parts of the country.

“The CDC has published some additional genomes from Missouri, Illinois and Kentucky,” said first author Kristine M. Wylie, PhD, research instructor in pediatrics. “The Missouri genomes, including ours, are all very similar, but the Illinois and Kentucky genomes are different from the Missouri types, suggesting there are some distinct strains circulating in the U.S. right now.”

Wylie also pointed out the importance of continuing to characterize the genetic features of this virus and monitor the health of patients with the D68 strain.

“Until recently, this virus has been pretty rare,” she said. “It would be helpful to have more data about the virus and the patients so that we can start to associate the genetic features of the virus with the severity of the disease.”