Science as profane: What superstition of 1752 and 2014 share in common

In 1752 Philadelphia, a citizen scientist and his son decided to fly a kite in an afternoon thunderstorm.

He didn’t realize it at the time but Benjamin Franklin was about to set off a schism between science and superstition, one that wouldn’t be resolved until well into the next century – and it would crop up again over 200 years later.

The idea that lightning and electricity might be the same thing had been discussed in intellectual circles for a few years prior to Franklin’s work. One experiment had even been done in Europe, though Franklin was aware that having nothing but conducting rods standing between him and God’s own fury was a bad idea so he used…a kite. If lightning was electricity, he knew he would be protected by the silk ribbon with which he controlled the kite string – and he would trap nature itself in a jar.

A flimsy piece of material was all that protected him from a lightning bolt? Franklin knew that a piece of dry silk would protect him from nature because he understood natural laws. He then invented the lightning rod to help protect the homes of people who lacked his level of insight – he was not paralyzed by superstition or the precautionary principle, reason was his parameter. People accepted his technology even if they did not understand it, they didn’t forego building houses because houses might get struck by lightning, they embraced a way to protect houses from lightning. That is a good analogy for the bold science of today. Some people would prefer we stay in scientific caves.

That new understanding of nature and electricity set off a flurry of interest and experimentation in all areas of research. Luigi Galvani began using electricity on dead frogs and later his nephew would seek to bring the dead back to life. Erasmus Darwin’s Zoonomia discussed ‘generation’, a precursor to the evolution his grandson would make famous. People were fascinated by the idea that we might understand how to control the breath of existence.

Not everyone was pleased by Franklin’s kite or the efforts of biologists to use electricity to understand life. Superstitious people did not see the promise of science, they were frightened that it would spiral out of control. As Roseanne Montillo phrases it in The Lady and Her Monsters

To them, the idea that nature could be made to bow down to man bordered on the sacrilegious. If man could steal thunder from the sky; elicit electricity from the heavens; make dead frogs, sheep and dogs jump; and impart a certain measure of respiration to the dead, then what need was there for a God who had dominion over everything and everybody? These people believed the angry storms of August 30 were a sign not of untamed knowledge, not of nature bending down to human will, but of God’s wrath. The human race had overstepped its boundaries in some fashion, and God was now seeking His vengeance.

The August 30th Montillo writes of is the year 1797. As lightning raged across the London skies a baby girl named Mary Godwin was born. In 1818 her novel Frankenstein; or, The Modern Prometheus would be published and it contained everything that people in the literate public knew about the latest advancements in understanding the essence of life. Frankenstein was a cautionary tale about what scientists of the day discussed – the origin of consciousness and how electricity might restart it, or even create it. Mary (by then with a Shelley surname) loved science, she had been steeped in it since childhood, and she wrote her story for the same reason that science-fiction writers, who love and respect science as much as anyone, write cautionary tales about its unbridled power – as illumination.

Shelley was well-versed in the anatomical work of Galvani and the more garish experiments of his nephew Aldini, and of Volta’s work with electricity. The end of the French Revolution in Europe had brought the beginning of the Scientific one – a volcanic eruption had just caused global temperatures to drop and crops to fail, which led to uptake of synthetic fertilizer – and she also understood natural philosophy and the ethical concerns of the era. Frankenstein is overrun with descriptions of the natural world not because she feared science, but because she loved it. 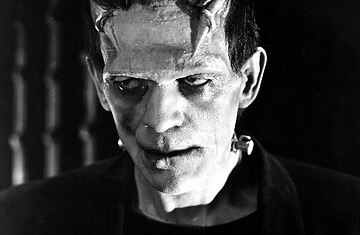 Like hijacking of the Frankenstein concept by political activists, this imagery had little to do with Shelley’s actual Frankenstein.

Prominent in the novel is the anti-science community of the time, huddled in fear and fomenting hysteria about progress. In her story, they quite literally turn into a mob armed with pitchforks and fire, determined to kill science itself.

Today, the Frankenstein story is invoked in exactly the opposite way that Shelley wrote it – it is invoked as a reason to retreat back into the world of superstition and ignorance, before medicine and modern fertilizers. In the 21st century, thanks to our understanding of biology, food production has dramatically increased. When Mary Shelley was born, the masses starved in London’s ramshackle hovels but today, for the first time in history, the poorest people can afford to be fat.

Yet the advancements that have made plentiful food possible are demonized and termed ‘Frankenfood’ by the modern equivalent of 18th century superstitious villagers, as if they are an unholy creation that must be put to the torch before it kills us all.

Culture has essentially flipped since Franklin and Shelley bookended their era in 1752 and 1818. In their time, the opponents of efforts to understand the physics and biology of nature were the un-educated religious masses, while wealthy, educated elites filled halls to watch demonstrations. Today, it is just the opposite and wealthy elites regard science as sacrilegious, a violation of the perfection of nature, while overwhelmingly religious states like Mississippi have essentially 100% vaccine uptake and recognize that an organic sticker is just a marketing claim.

In the 18th century, religious people believed that every disastrous event and disease was God’s wrath against man’s foolishness but in 2014, it is the literati who find the curse of humankind in every storm and outbreak. Wealthy, educated California has three times as many philosophical exemptions to vaccines as the next most anti-vaccine state in the U.S. Biology, energy, medicine, pick almost any field of modern science and wealthy, educated states like California and Oregon are against it. In Europe, countries like France and Germany also regard natural occurrences as a portent of supernatural wrath brought on by human ‘tinkerers’ destroying nature. In Italy, scientists were even put on trial for not predicting an earthquake, bizarre fallacious logic more akin to Salem witch hunts than modern reasoning.

Luigi Galvani filled entire theaters for his anatomical dissections in the 18th century. The wealthy masses went to see the latest demonstrations of breakthroughs in anatomy in person. Today, not only do wealthy elites not want to witness science, they want to deny it exists. They prefer a universe where there are no natural laws, science is profane…and best left to horror stories.