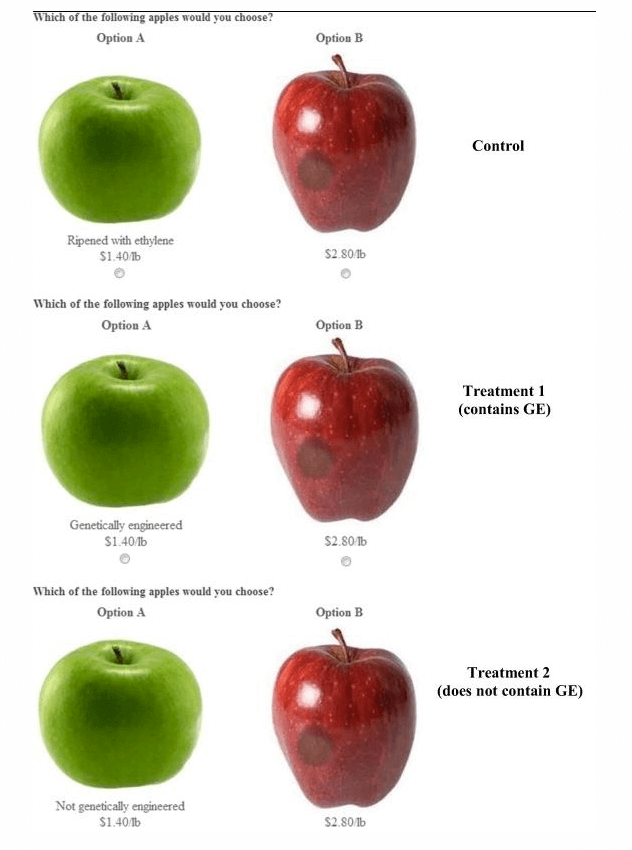 Will consumers pay more to avoid GMOs and if so, how much? Apparently it depends in part on whether labeling is mandatory.

That question hangs in the balance yet again as voters choose their position on mandatory labeling bills in Oregon and Colorado. All studies show that mandatory labeling will result in higher foods prices, although the amount of the increase has been hotly debated.

Jayson Lusk, Regents Professor and Willard Sparks Endowed Chair in the Department of Agricultural Economics at Oklahoma State University, addresses the issue in a recent post. Lusk and Marco Constanigro at Colorado State University investigated the issue in a studies they conducted last year, which are now published in the journal Food Policy.

Their research strategy sought to determine whether consumers who were exposed to foods that had GMO labels subsequently indicated higher levels of concern than people who hadn’t been shown such labels. In one study, they used apples as the context. Respondents were randomly assigned to one of three groups.  One group (the control) made choices between apples that did not mention GMOs at all – that had a decoy attribute: ripening with ethylene.  Another group made choices with mandatory (“contains”) GMO labels, and another group with voluntary (“does not contain”) labels. The following shows examples of choices presented to people in the control and treatment groups.

They then asked each set of consumers questions about how safe they thought it was to eat GMOs, how concerned the were about GMOs relative to other issues, etc.

Related article:  My journey from suburban mom and chef to GMO and science advocate

The first result: There was no consistent statistically significant difference in the average level of concern for GMOS expressed by people shown different labels.  That is, the mere presence of the GMO label did not lead to a greater level of concern about GMOs.

Yet there was an intriguing twist in data. The researchers studied the actual apple choices that people made, and used those choices to infer aversion to GMOs. Their conclusions:  Consumers’ willingness-to-pay to avoid GMOs is more than twice as high in the presence of mandatory “contains” GMO labels as compared to voluntary “does not contain” GMO labels. Also, willingness-to-pay to avoid ethylene ripening (a common, and heretofore uncontroversial, industry practice) is as high as that to avoid GMOs.