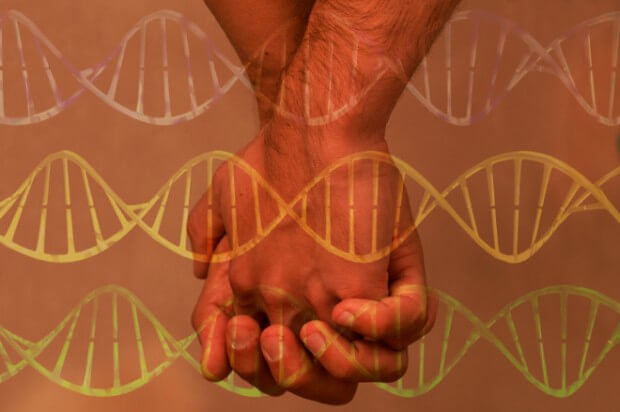 Lots of (largely unjustified) journalistic fuss over that “gay gene” paper published last week. But here’s the reality, which the Associated Press’s Lindsay Tanner summed up best: “A large study of gay brothers adds to evidence that genes influence men’s chances of being homosexual, but the results aren’t strong enough to prove it.”

Let me unpack that for you. One reason to be intrigued by this study, published November 17 in the journal Psychological Medicine, is that it is the largest so far that has looked for genetic factors in male homosexuality, involving 409 pairs of gay brothers.

Another reason to pay attention is that the paper confirmed a much smaller study from 1993 that associated male homosexuality with a particular section of the X chromosome. Although the researchers set out to see if there was anything to that original study, they really didn’t expect to confirm it, according to one of them quoted by Kelly Servick at Science. The new study also confirmed hints in a 2005 paper of a region related to male homosexuality on chromosome 8.

One reason both the early X chromosome study and this one are particularly noteworthy is that they provide an explanation for an evolutionary puzzle about same-sex sex: if it’s partly genetic, why does it persist, since homosexuals have few children to pass on these genetic tendencies? (Remember that the various forms of assisted reproduction that make children more possible for gays than they used to be is quite a recent development. Even with ART, the gay male reproductive rate is still lower than the rate for heterosexual men.)

But if the genetic factor(s) for being sexually attracted to men lies on the X chromosome, that evolutionary question fades, for both cultural and genetic reasons. For one thing, homosexual men, having no family obligations of their own, are still in a position to help pass on their family genes by contributing to the upbringing of their nephews and nieces, their heterosexual siblings’ children. For another, women who inherit that X chromosome may be exceptionally attracted to men too, and may have more children as a result. At least one study has supported that idea. It found that women with homosexual brothers did have more children than others.

Caveats about this new study

And here are the howevers. Because they were trying to replicate the original 1993 study, the researchers used the same study methodology. That approach, known as  linkage analysis, has long since been supplanted. In linkage analysis, researchers are trying to home in on an area of the genome that might influence a trait. But the area is big, containing many genes, perhaps hundreds of them. So it’s not helpful in figuring out just which genes might be involved.

Linkage studies have been replaced by a technique called genome-wide association studies (GWAS), which can identify particular candidate genes worthy of further examination. Which makes this the place to point out that, despite the headlines, scientists don’t ever expect to unearth a single “gay gene.” As Servick notes, twin and family studies have long suggested genetic factors in homosexuality, but researchers who accept those findings believe genetic predispositions interact with environmental factors in developing a person’s sexual orientation.

Another reason for caution: although the data in the new study showed a trend to being statistically significant, most of the numbers never really got there. One of the things that might mean is that the idea of genetic factors in male homosexuality is hogwash, a position with a good number of devotees, including some researchers.

But another thing it could mean is that this area of the X chromosome might figure in homosexual behavior in some men, but it is definitely not a universal explanation for same-sex sex. That would allow for other explanations that have been proposed, such as events in the womb. In short, sexual orientation could be the result of many factors, some genetic and some not, interacting in intricate ways that we have not yet fathomed. Accepting that lots of elements go into sexuality seems pretty reasonable to me, given that sexual behavior is nothing if not complicated.

Furthermore, this research involves male homosexuals only. It says absolutely nothing about female homosexuality or bisexual behavior, where genetic factors have hardly been studied at all. This is a point made in Samantha Allen’s skeptical piece at The Daily Beast; she claims that bisexuals account for half of the LGBT community.

( I suppose you could speculate that perhaps that interesting stretch of the X chromosome influences attraction to females. Males with that DNA might have more children than average and pass on more of the family genes, compensating for the low reproductive rate of their lesbian sisters. Let me emphasize: sheer speculation, with no supporting data that I know of.)

We may know more soon about what (if anything) about sexual orientation is going on on the X chromosome, and on chromosome 8 too. The same researchers, fully aware that there are now better tools for gene identification than linkage studies, have already launched a GWAS. It will include data from the men in the recent study and DNA from an additional 1,000 gay men.

Geneticist Razib Khan, the well-known blogger at Gene Expression, is confident that clarification will be forthcoming. “[A]at some point in the next ten years I’m pretty sure we’ll localize the genes which carry variants which do result in a higher than typical likelihood of an individual exhibiting homosexual orientation,” he predicts.

If Khan’s forecast comes to pass, what might be the policy outcomes for more precise explanations of how genes play a role in homosexuality?

Dean Hamer, who led the 1993 study of the X chromosome’s role in male homosexuality, thinks a biological answer to that question has been crucial for the speedy cultural acceptance of gays in the the past few years. In an opinion piece that appeared last July in The Scientist, he argued many surveys have shown that, “while most of those who believe that people are born gay agree that same-sex relations should remain legal, nearly 70 percent of people who believe it’s a choice think that antisodomy laws should be reinstated.” To make the point exceedingly personal, he noted that such people believe he himself should be in jail.

One of the authors of the new paper, Northwestern University psychologist Michael Bailey, agrees. “Pro-gay liberals tend to emphasize innate causes, and anti-gay conservatives “choice” and malleability,” he said in another July opinion piece at The Scientist. Samantha Allen, however, argues that acceptance is based mostly on whether a person knows someone who is gay. What matters, she says, is friendship, not belief that gays are “born that way.” She also insists that attitudes are changing among gay men and women, that they are becoming more comfortable in challenging the biological origin story.

Despite many years of research on sexual orientation, Bailey believes the influence of genes on sexual behavior is “modest.” He also says it’s possible this research could lead eventually to knowledge about how to change sexual orientation. Parents, he believes, would have the right to use that knowledge because shaping children is what parenthood is about. He declares, “Changing a baby’s future sexual orientation isn’t harming the baby.” I daresay some would challenge that notion. Loudly.

At the National Review, Wesley Smith wonders if genetic testing can be far behind discovery of genetic factors in sexual orientation. He is thinking especially of prenatal diagnosis and even applications in assisted reproduction, diagnosis of embryos before implanting them. He’s concerned about abortion for possible genetic tendencies toward homosexuality. But as long as we’re speculating, why not speculate about the opposite attitude: abortion for lack of these genetic tendencies, in an attempt make a homosexual child?

Discovery of genes involved in sexual orientation, if any, won’t put an end to these debates.