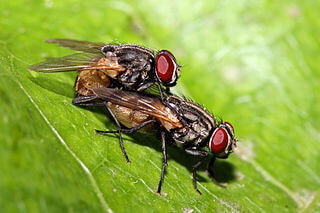 Insects that humans have always regarded as nothing but pests are being exploited for good purposes too. They provide scientists with useful genetic information and also hold promise for being helpful to the rest of us.

Take, for instance, the human body louse. Like other lice, it feeds on skin. But it cannot live in hair as our head and pubic lice do. The body louse lives only in the folds of clothes. Scientists have used its genes to estimate that it evolved from head lice perhaps as long as 200,000 years ago. They assume that the body louse’s origin marks the time we naked apes first shed the protections of loose-fitting animal skins and began wearing real tailored clothes.

The common housefly, Musca domestica, is another insect that figures in the very ancient history of Homo sap. Scientists have speculated that the housefly is one of those creatures, like dogs and rats, that have linked their lives with ours, evolving and prospering by tagging along with humans so they could eat our wastes–garbage and, uh, personal.

Houseflies are thought to have originated in Africa and left there when some of us did, accompanying insatiable human travelers—and their leavings—around the world. Cornell entomologist Jeffrey Scott recently told New Scientist, “If humans died out, the housefly would probably go too.”

Scott led the big team of scientists that sequenced the complete genome of the housefly Musca domestica, which was published last fall in Genome Biology and is free to read. The researchers who did the fly genome say the potential benefits to humanity are many.

Of course anybody who watches television knows that forensic scientists would be lost for catching murderers without the housefly who lays her eggs in wounds or body openings when a corpse has begun to bloat. The development stage of the fly’s larvae (and the appearance of species that prey on the larvae) help scientists determine the time of death. Fly-assisted investigations are not a wholly recent development. The fly has been helping homicide detectives since at least 13th Century China, and scientists began to define insect succession on corpses in 18th Century Europe.

Fighting disease with the fly genome

Some potential benefits of the housefly genome are expected to emerge from the fact that, just as your grandmother warned, flies carry disease. They puke and poop wherever they land, and those excretions contain disease organisms that can be passed on to passersby.  More than a hundred human diseases are transmitted to us by flies, Scott says. Among them: typhoid fever, dysentery, cholera, poliomyelitis, yaws, anthrax, tularemia, leprosy and tuberculosis.

One of the most notable fly-borne diseases is trachoma, a major cause of blindness, with 6 million current cases. Flies have also been suspected of transmitting Ebola virus, although that accusation has not been confirmed. Flies transmit diseases among livestock and other animals too.

How could the fly genome help fight disease? For one thing, it could improve control methods. Flies quickly evolve resistance to pesticides. With the genome now in hand, scientists expect to be able to track down the genes that foster resistance.

The M. domestica Genome Project disclosed that houseflies have much bigger genomes than other flies, about five times larger than geneticists’ favorite experimental species Drosophila melanogaster, the fruit fly. That’s mostly because houseflies have an enormous number of immune system genes. Those extra immune system genes are believed to help them live in septic environments and stave off damage from all the disease organisms they carry.

Scott has suggested that new technologies for turning genes off, such as RNA interference, might be delivered to flies in a bait. Turning off genes that protect them against their toxic baggage could be a species-specific and environmentally safe control method.

They might also teach us how to ward off our own diseases. Housefly saliva contains peptides that fight microbes.  In fact, fly larvae, commonly called maggots, have long been used to prevent infection of wounds, Scott says. “If you isolate the gene that makes the antimicrobial peptide, you could potentially make it in the lab and produce buckets of it.”

Our friend, the housefly

In addition to serving as invaluable assistants to forensic scientists, flies are helpful in other ways. Their love of feces means that they consume a lot of it, human and animal. Manure from factory farming of livestock is a huge environmental problem, but it would be even more huge without the faithful disposal services provided by M. domestica and other flies.

Fly larvae “have been successfully used to reduce mass of animal manure, fecal sludge, municipal waste, food scraps, restaurant and market waste, as well as plant residues left after oil extraction,” according to a review published just this month. The process reduces disease organisms in the manure and the result is valuable fertilizer. One thing that would help fly-based waste disposal become more widespread, the researchers say, is better knowledge of fly biology. The fly genome will certainly help.

The housefly’s devotion to feces has been harnessed systematically to do more than just dispose of manure. For some years the Chinese have been experimenting with using housefly larvae to break down antibiotics in pig manure, preventing them from getting into the environment. Industrial farming relies on dosing animals with antibiotics to fatten them fast, but it’s also a most effective way to spread bacteria that can resist antibiotics, which is very bad news for treating infectious disease. The Chinese report that fly larvae removed antibiotics from manure quickly, a 70% reduction in six days. It removed bacteria as well.