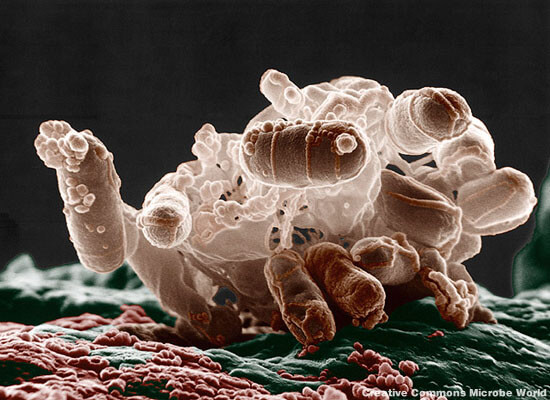 Drinking water in a city becomes contaminated with with a species of bacteria called Vibrio cholera and thousands of people get really sick. Within days, victims suffer horrible diarrhea, leading to loss of water and electrolytes, and many die.

That scary scenario hasn’t happened for over 100 years in the United States because of preventive measures, especially sanitation of the water supply through chemical methods, especially chlorination. But in nearby Haiti, 731,880 cholera cases have occurred, leading to 8,741 deaths (as of February 2015) since an outbreak began in 2010.

It’s a sobering reminder of how dependent we are on the ability of our chemical measures to kill bacteria–just as we’ve become dependent on the capabilities of the drugs that we use to stop bacterial infections when people are stricken with them.

We are entering what the World Health Organization calls a “post-anti-biotic era”, and it could get ugly.

Catch a streptococcal infection in your throat and modern medicine is very efficient at treating it. Within days of starting penicillin, you’ll feel much better and avoid developing rheumatic fever, a complication that used to damage heart valves of thousands of people each year in the days before we had antibiotics.

On the other hand, get hospitalized and you could become infected with a potentially deadly and drug resistant form of staphylococcus bacteria. For preventing cholera and for treating bacterial throat infections, water sanitation and antibiotics are still working extremely well, but antibiotic resistance is growing for other types of bacterial infections, plus there are signs that water chlorination could be contributing to the situation. Therefore, WHO has warned that we could heading toward a time when many of the diseases that we’ve already conquered return with a vengeance.

Despite the advances of the last three quarters of a century, our antimicrobial armaments are weakening. As explained by WHO, in a very real sense, we actually could be on the verge of moving backward:

In the absence of urgent corrective and protective actions, the world is heading towards a post-antibiotic era, in which many common infections will no longer have a cure and, once again, kill unabated. The implications go beyond a resurgence of deadly infections to threaten many other life-saving and life-prolonging interventions, like cancer treatments, sophisticated surgical operations, and organ transplantations. With hospitals now the hotbeds for highly-resistant pathogens, such procedures become hazardous.

Essentially, because of the widespread use–and in many cases misuse or overuse–of antibiotics, Darwinian selection has led to the emergence of “superbugs”, such as methicillin-resistant Staphylococcus aureus (MRSA) and highly robust strains of Clostridium difficile. And the story just gets worse. Even before antibiotics were discovered, humanity was winning major battles against pathogenic microbes through a simple measure: purification of the water supply. Using disinfectants in the drinking water, we’re prevented an unfathomable number of deaths. Modern civilization is barely conceivable without such purification measures. But new research now indicates that chlorine used for sewage treatment might also be contributing to the antibiotic resistance that’s plaguing hospitals. Then, there is the matter of antibiotic use in livestock and in research laboratories, both of which complicate the problem, because these two uses account for large quantities of antibiotic drugs.

We need creative strategies to prevent bacterial spread in the first place, but in this case technology may offer some hope. While the fight against pathogenic bacteria has become more complex over the last 70 years, nanotechnology–specifically, the ability to assemble things on a very small scale–has improved to the point that we’ll soon be able to fight bacteria one by one, using specially designed surfaces inspired by an unlikely human ally: the shark. Before we get to that, however, let’s take a look at other potential solutions being discussed.

Researchers are developing new antibiotics much more quickly, and clinicians are intervening to prevent overuse and misuse of the drugs that do work. The complexity of the issue is magnified by the fact that the degree of antibiotic misuse may be related to loose oversight in some countries and to corruption in private and public clinics.

According to Sanjaya Senanayake, who studies antibiotic resistance in India,

In countries with greater corruption, antibiotic usage may also be much higher than what is recorded. If governance and control of corruption can be improved, this can be an important factor in reversing high levels of antibiotic resistance.

Because the Human Genome Project and other grand scale projects, and also because of standard microbiology research, fairly large amounts of antibiotics are used. Laura Bowater of Norwich Medical School of the University of East Anglia says it’s not responsible given the overlap of the antibiotics used experimentally and those used clinically.

For these reasons, Bowater says, “At the very least researchers must be encouraged to use antibiotics more responsibly and sparingly in both educational and research settings.” That’s easy to say, but it’s not clear how easy it will be to implement.

While the issue is very complex and most of the decisions will be made by public health professionals, everybody can help, because nearly everyone takes antibiotics at some point. For this reason, the Food and Drug Administration, has put out guidelines for the general public. Basically, the guidelines explain when and how antibiotics are appropriate. For instance, they kill bacteria, but not viruses, and most upper respiratory infections are viral, so don’t use them in such cases, and don’t pressure your physician to give them to you.

Conventional methods to stop the spread of bacteria in hospitals and other health settings consist of cleaning surfaces, especially surfaces that people touch a lot (such as controls of equipment), use of gloves and other protective equipment, and hand washing. These methods work extremely well, but they’re not always enforced as well as they could be (which leaves room for improvement) and sometimes, clinicians don’t have time to wash, for instance if a patient is bleeding to death.

For this reason, hospitals have experimented with surfaces on which bacterial cannot stick well, or survive. One strategy along these lines has been the use of copper-containing alloys. Copper is toxic to bacteria, so if a colony of bacteria gets from someone’s fingers to a copper alloy dial on a machine, the bacteria die before the next person touches them. Another tactic comes from a company called Sharklet Technologies takes an example from nature. Says Sharklet researcher Ethan Mann:

Shark skin…seems highly adapted to resist attachment of living organisms such as algae and barnacles…. Shark skin has a specific roughness and certain properties that deter marine organisms from attaching to the skin surface. We have learned much from nature in building this material texture for the future.

The company has developed a material containing what Mann calls the “Sharklet micropattern”. At the molecular level, the surface looks similar to that of shark skin. It’s shaped in a way that simply does not allow microorganisms to attach.”

Using a common hospital born S. aureus bacterial called MSSA, Sharklet researchers have found that surfaces with the special micropattern reduce bacterial spread by 97 percent compared with smooth surfaces. Moreover, spread of the more problematic S. aureus strain MRSA is reduced almost as much as MSSA is reduced (94 percent). By contrast, use of copper alloys on surfaces reduces spread of these bacterial strands by only 80 percent.

To be sure, creative surface technologies alone will not stop the emergence of superbugs. On the other hand, in combination with other measures, like responsible antibiotic use and the development of new drugs, mimicking the effect of shark skin may really put some teeth in to the war against antibiotic resistance.