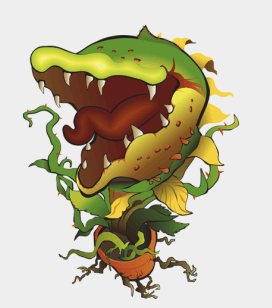 Read the latest “analysis” on GMOs from Consumer Reports and you’ll “learn” that glyphosate, the chemical developed by Monsanto (its patent is now expired), as Roundup–often but not exclusively paired with herbicide tolerant GM seeds—has led to an “explosion” in what are popularly known as “superweeds.”

The use of genetically modified seeds has … led to about a 10-fold increase in farmers’ use of glyphosate. But that in turn has created a new problem for farmers to battle: a rising number of “superweeds” that have now become immune to glyphosate. “This defeats one of the major reasons why GMOs were introduced in the first place,” says [Michael] Hansen, Ph.D., senior scientist at Consumers Union.

Doug Gurian-Sherman, a activist scientist at the Center for Food Safety, made identical claims when he was a lead scientist at the Union of Concerned Scientists before he was eased out of UCS almost a year ago. Superweeds are a “plague”, he has contended:

It sounds like a bad sci-fi movie or something out of The Twilight Zone. But ‘superweeds’ are real and they’re infesting America’s croplands, Overuse of Monsanto’s ‘Roundup Ready’ seeds and herbicides in our industrial farming system is largely to blame. And if we’re not careful, the industry’s proposed ‘solutions’ could make this epidemic much worse.

Well, Gurian-Sherman and Consumer Reports are over the top wrong.

Let’s start with the use of the term “superweed.” You now see it in stories all the time, even in the mainstream media and in usually reliable sources. But for the most part it’s a meaningless term. Andrew Kniss, associate professor of weed biology & ecology at the University of Wyoming responding to a story in the journal Nature:

I was a little disappointed to see the term “superweeds” in any type of scientific publication. I have repeatedly expressed my displeasure with this term, and my graduate students know better than to ever use the word around me. To see it in a publication as reputable as Nature is exceptionally frustrating.

Many activists use the word to describe a weed that can out compete with other plants, particularly food crops, in ways never seen before on farms. They conjured images out of the Little Shop of Horrors: monstrous, hideous creatures leaving carnage in their wake, as Missouri Farm Bureau head Blake Hurst once wrote. But that’s not the case. In fact, attempts by farmers to stave off bugs, fungus and weeds reach back thousands of years. Hardy weeds that have developed resistance to herbicides, including organic herbicides, have always “plagued” modern farming.

Weeds, just like humans and all living things, have a fierce survival instinct. When a chemical–natural or synthetic–is applied to fields to kill them, random “protective” mutations allow a handful to survive. Over the years, that hardy handful of weeds propagate, and eventually the farmer is faced with a so-called “superweed.” It’s how evolution works.

So let’s dump the scare jargon: superweeds are not ‘super’ in any real sense of the word; they are just weeds that have evolved to evade a particular weed management strategy. If you have ever seen a dandelion so short that it has almost no stem, you’ve seen a superweed. That dandelion’s super power is crouching down, so that lawnmowers can’t get it before it goes to seed. But really, we are talking about weeds that have evolved to withstand applications of our most commonly used herbicides, including glyphosate.

Periodic resistance to pesticides has been growing for about 40 years–in parallel with the rise of large scale farming, both conventional and organic. Contradicting the dire picture painted by Hansen and Gurian-Sherman, there’s been no sudden increase in resistance since genetically modified crops were introduced. In fact, as we’ve reported at Genetic Literacy Project, the level has fallen somewhat since glyphosate resistant crops were introduced. Glyphosate has actually improved the situation with herbicide resistant weeds by decreasing the use of atrazine, which was the most popular herbicide before RR crops came along.

Some weeds have even managed to evolve ways to resist many different herbicides. In an herbicide-free environment, certain weeds will grow faster and bigger, physically crowding out other plants (including desirable crops). They’ll take water and soil nutrients as well as physical space. It doesn’t matter whether the crop is conventional, organic or genetically modified; weeds will act exactly the same way. Resistance comes from using an herbicide that has one mechanism of action—a small number of weeds will be able to survive the herbicide, and return to plague the crops that received the herbicide.

In other words, there is no crisis; weed management is complex; glyphosate is not the devil in plant form. All of which makes the hyperbolic comments spewed by Consumer Reports, once a reliable independent consumer-focused magazine, all the more disappointing. CR is now claiming dozens of weeds now resist glyphosate, which means, it concludes, that the herbicide is “losing its effectiveness.”

While the International Survey of Herbicide Resistant Weeds does count 32 weeds that resist the main action of glyphosate and similarly acting herbicides, the same survey shows there are 150 weeds overall that resist some kind of herbicide. In other words, disease resistance is not a problem unique to glyphosate. It’s relationship to genetic engineering is minimal. And here’s something you won’t read in Consumer Reports: Independent international agencies tracking weed resistance show that it has subsided somewhat since genetically modified crops were introduced. The down trend is modest, so it’s not a reason to stand up and cheer. But the facts belie the hysteria generated by campaigning scientists—let’s call it, in Al Gore’s words, an “inconvenient truth” to hard-edged ideologues.

Instead of promoting fear and perpetuating the myth of Godzilla-like monster plants wreaking havoc on humanity, the Weed Science Society of America recommends a number of practices that any farm (organic, genetically modified, or conventional non-GMO) can take:

• Apply integrated weed management practices, including multiple herbicide modes-of-action with overlapping weed spectrums in rotation, sequences, or mixtures.
• Use the full recommended herbicide rate and proper application timing for the hardest to control weed species.
• Scout fields after herbicide application to ensure control has been achieved. Avoid allowing weeds to reproduce by seed or to proliferate vegetatively.
• Monitor site and clean equipment between sites.

Many farmers are using these practices. But they will never entirely eliminate the damage wrought by weeds, fungi, insects and other pests and the collateral problems that flow from agents used to combat these pests. Let’s not lose sight of the fact that pesticide control is a central component of modern agriculture, whether you run a conventional or organic farm. Crop losses before harvesting average 35 percent worldwide currently. What would those losses be without pesticides? More like 70 percent, say agricultural experts.