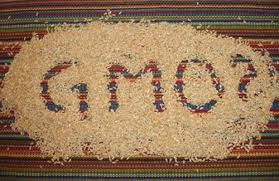 Around our home, spring is also known as planting season. Starting in a few weeks, and lasting a couple months, we will be planting full time. From early in the morning until late in the evening, our farmers will be in the field planting our corn and soybean crops. You can bet that those seeds are going to be genetically engineered varieties. Some of the seeds may even been varieties developed by Monsanto. Or Monsatan, according to its harshest critics.

But what you may not realize is that’s exactly how we as farmers want it.

Surprised? You shouldn’t be! Before farmers can plant their crop, they have to pick out their seeds. I’ve heard this criticism many times: farmers are either forced to choose genetically engineered seed by the big bad biotech companies, or we’re too stupid to make better choices. In other words, we aren’t making an informed and knowledgeable decision to cultivate genetically engineered crops; we’re being told we have to plant them.

In reality, farmers do have a choice – many of them – when it comes to the seeds we purchase.

Which seeds to use is probably one of the more complicated questions that a farmer has to figure out. The decision sets the stage for how well the crops are going to turn out and, quite literally, whether the farm is going to be profitable. Obviously, other factors will come into play throughout the growing and harvesting season, but choosing the right seeds is a crucial first step.

At our farm, we have sales people that approach us each year from different regional dealerships that all service our area. Sometimes we buy all of our seed from one company and sometimes we buy from a few different companies. In any given year, including last year, we may plant seed from Monsanto/DeKalb, Sygenta/NK, Dupont/Pioneer, and Stine. Despite what you may  have heard, these companies are not twisting our arm to get our business or dominating the market in some other way. In fact, the companies are actually competing with each other to make the sale.

My dad’s preferred seed company this year, and for the several past years, is Stine Seed. You can check out an online version of their catalog here.

No doubt we have all been to the local grocery or hardware store and come across the display stand for seeds – flowers, fruits, and vegetables. Want to grow carrots this year? Just grab the seed bag with the fresh carrots on the cover. Tomatoes? Aside from choosing blueberry, cherry, or regular, there probably are not a lot of options.

That couldn’t be farther from the truth when it comes to picking out seeds on the farm.

Once a farmer has picked a seed company to purchase from, there is another round of decisions that needs to be made. Above, I linked to the 2015 Stine Seed catalog. The catalog only features Stine’s corn and soybean seeds for this growing season. It has 48 different varieties of soybeans and 56 different varieties of corn. Each of the varieties is unique and have meaningful differences.

The differences between each variety highlights some of the issues and concerns farmers deal with during a typical season. Each variety is listed with a rating of how it performs for various factors. Let’s stick with corn for a minute. How long does the crop take to mature? Does it do well with high populations? How tall will the stalks get? What color is the cob? How quickly will it dry down? How strong is the root? How susceptible is it to different diseases? How will it respond if I have to plant corn two years in a row?

It doesn’t take much to realize that the process of selecting the seed can get a bit complicated. What happens if a particular field has really sandy ground? It may be necessary to pick a seed that performs well in dry conditions, even if that means sacrificing a variety that doesn’t do as well with harvest standability.

Oh, and while all of those factors and differences are being weighed, keep in mind that there are also biotechnology traits that need to be considered. If a farmer wants a crop that is herbicide resistant, there are several varieties and options available aside from the popular Round-Up Ready varieties. Will choosing Liberty Link over Round-Up Ready make a difference when it comes to the various factors already discussed? Maybe.

While all of that may seem like enough to consider, there are also other things that may influence what types of seed are chosen.

Price is a big one. A bag of genetically engineered corn seed can be significantly higher than the seed for a non-GMO variety. (Yes, despite what you may have heard, we always have a choice to purchase non-GMO seeds.) But the non-GMO variety is likely to have lower yields and may require more herbicide or pesticide applications throughout the growing season. The GMO varieties offer higher yields and less applications of herbicide in the fields, which translates to less fuel, less wear and tear on equipment, and less time.

Even the type of planter a farmer is using may influence the seed buying decision! For example, some planters work better with a specific type of seed, such as large round or small flat. Some planters are also  equipped with the ability to apply insecticide through the planter, which will also influence whether or not a farmer buys seed treatments or what kind of seed.

As you may have figured out by now, choosing which seed a farmer is going to plant is not one that can be taken lightly. It takes planning. It requires a good understanding of how the various traits can influence a crop. It means a farmer needs to be familiar with his fields, the weather, and the soil. It’s no wonder we need crop consultants!

Each farm is unique. To find the right seed, it usually also takes a little bit of experimenting. Do one company’s seeds perform better than another company? Are there some traits that work better in one kind of field, while others maximize yields for a different field? Is there something about the growing season that’s different this year and needs to be accounted for?

It also probably takes a little bit of luck.

No matter what the situation, however, it starts with a choice. Farmers have a choice to grow genetically modified crops or not to grow them. Considering all of the other factors and considerations that weigh into the decision, it takes an understanding of how all these different dynamics work within each unique farm. The choice is about doing what is right and works best for each farmer.

Amanda Zaluckyj, an attorney who blogs at TheFarmersDaughterUSA, is from Southwest Michigan where her family farms 2,000 acres of corn and soybeans. For 26 years, Amanda and her family ran a roadside market selling their own fresh fruits and vegetables. Her Twitter handle: @farmdaughterusa