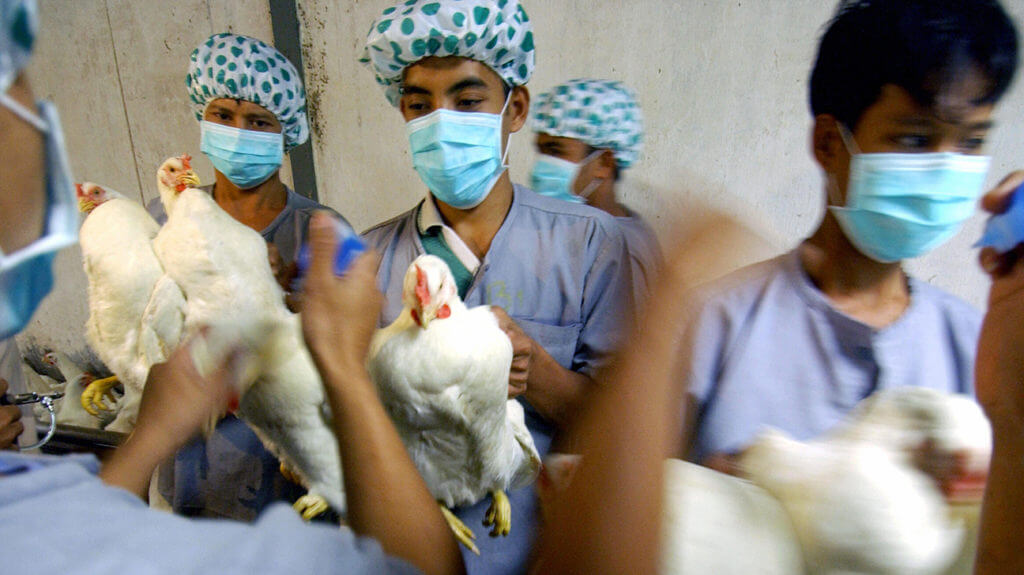 Now that the COVID-19 vaccine rollout is picking up steam, it’s tempting to hope that the world can soon move past the horrific human and economic tolls of the coronavirus pandemic and return to “normal.” Unfortunately, as scientists and even comedians have warned, our “normal” way of life makes us at risk of additional pandemics.

According to the Financial Times, some 1.6 million viruses are present in mammals and birds and about 700,000 of those could potentially infect humans. The vast majority of these have not made the leap to humans and thus their risks are unknown. Others we know about and are cause for considerable concern.

One is avian influenza, the highly infectious respiratory disease that can quickly wipe out massive populations of poultry. Transmission to humans is somewhat rare, but when it does happen it is incredibly dangerous. According to the WHO, the human mortality rate when infected with H5N1 influenza is 60 percent. The FAO reports that another strain of bird flu, H7N9, has caused 616 human deaths since 2013. Both strains have the potential to cause pandemics, health officials warn.

Beyond the human health risks, strains of avian flu can create economic havoc for the global poultry industry. Right now, numerous outbreaks of the highly pathogenic H5N8 virus, which has not been shown to infect humans, are coursing through Asia and forcing chicken farmers to cull millions of birds. South Korea has culled nearly 29 million poultry, Japan has had to kill over 7 million and India is dealing with “one of the worst outbreaks ever.”

By mid-February, there were also nearly 500 avian flu outbreaks throughout Europe, while outbreaks in Nigeria and Algeria have left African poultry farmers alarmed.

CRISPR to the rescue?

The safety concerns surrounding avian flu often result in a “better safe than sorry” approach that leads to mass culling orders that cause enormous economic damage to poultry farmers. A 2015 outbreak in the United States led to the death of some 50 million birds and an estimated economic toll of $3.3 billion.

The Israeli ag-tech startup eggXYt, better known for its sex-detectable chickens, thinks that the same CRISPR technology it uses to eliminate the culling of male chicks could also be used to develop chickens resistant to avian flu.

“The transition from sexing to disease resistance was for us very natural. We believe that CRISPR and other advanced genetic improvement tools are the key to creating a more sustainable livestock industry, both in terms of animal welfare and agricultural efficiency,” eggXYt co-founder and CEO Yehuda Elram told the Alliance for Science.

In December, eggXYt announced that it is collaborating with the United Kingdom startup Tropic Biosciences to use gene editing to create resistance to the costly and deadly disease.

“Following the COVID-19 outbreak, we are all very mindful of the threat of zoonotic diseases to human health and so we are especially motivated to embark on a project that may help to prevent further pandemics,” Elram said in a joint press release.

“The GEiGS platform harnesses naturally occurring defense mechanisms to directly attack disease agents, solving the heavy burden of target gene discovery for gene editing applications,” Eyal Maori, Tropic Bioscience’s co-founder and chief science officer, said. “This is driving extensive interest in the technology from outside parties and we are delighted to partner with eggXYt and other innovative companies from the broader agricultural and life-sciences industries.”

Elram said that the recent outbreaks in Europe prompted eggXYt to identify “disease prevention in poultry as a problem worth solving.”

“We were aware that avian diseases inflict huge damages. With avian flu in particular, whenever an outbreak is reported, typically all birds within a certain radius must be culled by law, regardless of whether or not they have actually been infected,” he said. “This is a cruel reality that comes with a hefty price tag.”

He added that the gene editing abilities the company created while perfecting its sexing solution could be applied to disease resistance.

“We have assembled a team of world class molecular biologists who have expertise in gene editing and in avian science, making them uniquely poised to tackle this challenge,” Elram said. “We are one of the only, if not the only, company which has this as a core asset. By using gene editing, our team is able to give chickens genetic immunity to a host of diseases, in this first instance avian flu.”

EggXYt and Tropic Bioscience hope that the RNA interference (RNAi) solution they are using will accelerate regulatory approval processes. Elram said that eggXYt’s work on egg sexing and disease resistance illustrate the endless potential that CRISPR can have for “animal welfare, animal health, and by relation, human health, since so many human diseases today are zoonotic.”

“Avian flu is just the first of many diseases we hope to tackle using this methodology,” he said. “While sexing is an incredible application of CRISPR, disease resistance opens the door to countless other diseases in poultry and other livestock that can be prevented using this technology.”

Justin Cremer is a professional communicator who has spent nearly two decades alternating between journalism and marketing/communications. Find Justin on Twitter @MrJustinCremer