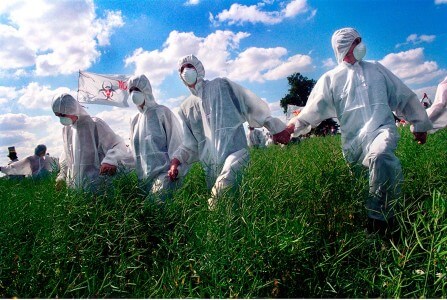 Discover magazine features a troubling cover story on the anti-agricultural biotechnology movement in its April issue (which you can read for free after registering at its site). Simply said, Discover gives unwarranted weight to anti-GM activists and in the process raises questions about the ability of even the most credible of science publications to avoid the perils of false balance when covering agricultural biotech.

As Keith Kloor pointed out in his sharply worded Collide-A-Scape blog (coincidentally hosted by the Discover website, where he is a respected blogger—points for Discover for encouraging this debate), the cover story focuses on the antics of GM protestors but ignores the recent push back from pro-science advocates in the United Kingdom, Europe and the United States.

Discover actually carries two reports: the cover piece profiles the GMO debate in Europe and a sidebar looks at what is happening in the U.S. Both set off shocked reactions in the Twittersphere from scientists and the science-minded.

The articles offer up a laundry list of familiar criticisms: biotech crops are untested; they hasten environmental degradation; they result in unstoppable superweeds; they pose health threats; they increase ‘dangerous’ pesticide usage; they could unleash unpredictable Frankenstein-like creatures into the world ecosystem; and so on.

These allegations—all of which are either demonstrably untrue or exaggerations of problems that are present in all of agriculture (including organic farming)—are the currency of such groups as the Environmental Working Group and the Union of Concerned Scientists, which make no pretense of their ideological rather than scientific opposition to GMOs.

Kloor quoted respected science blogger and commentator Rachael Ludwick, who pointed out that the sidebar merely rehashed anti-GMO talking points.  Charles Benbrook, she noted, is prominently quoted and identified as an “agricultural policy expert.” He’s nothing of the sort. Benbrook is an activist researcher with a long history of biased reporting about the ‘pesticide footprint’ associated with GM crops. He has few admirers in the mainstream science community and has deep financial ties to the organics

As Ludwick noted: “GMO foods are … subject to repeated studies by scientists after they come on the market for toxicity and other risks. Overwhelmingly, these studies show no problems for human health. You wouldn’t know that from the Discover piece, since it chose to mention problems found by a small minority of researchers, often heavily criticized. The piece wiggles around this issue by noting it’s hard to prove a causal link in humans. The reality is that links aren’t even proved in animals.”

Discover allows Benbrook to assert, unchallenged, that the “science just hasn’t been done” on GMO crops. This is just poor reporting. “There are hundreds upon hundreds of studies … on the EPA’s website” evaluating the safety of GMOs, far more than has been done on conventionally grown foods, where some genuine health-related problems in fact have been found, Ludwick noted.

Ludwick provided the example of the kiwi fruit, which was introduced to the U.S. without testing and has since been found to be allergenic. More recently, new celery varieties and potato varieties have been introduced that were found to have natural toxicants that are harmful to some people, including farm workers who handle the crops on a daily basis. There are no comparable examples of any GMO crop or food presenting such health challenges.

By focusing on anti-GMO demonstrators in Germany, the cover piece also ignored the evolving views in Europe, illustrated most dramatically by the public conversion of former anti-GMO campaigner Mark Lynas. Lynas, who was part of an eco-terrorist group linked to Greenpeace during the 1990s, has been open about his conversion from ideologue to empiricist—a change of heart and mind that has outraged the hard left. (Will Storr wrote more about Lynas’s travails in a fascinating profile that appeared in The Observer over the weekend.)

As Kloor noted, there are numerous signs that progressives are reassessing their once dogmatic anti-GMO stance—although Discover missed this trend entirely. It did not even mention the turnabout in public opinion that began in the UK last summer when scientists decided to mount a public campaign to dissuade anti-GMO Green Party protesters from destroying their research. The clash played out for weeks, made headlines around the world and led to a public reexamination of the anti-biotech cause. Even The Guardian, a great newspaper but congenitally anti-GMO, called the counter protest a turning point of sorts in the public discourse over GMOs—not unlike the international uproar the greeted the Séralini fiasco last fall.

Kloor remains one of the few progressive journalists worthy of the “progressive” label when it comes to straight talk on GMOs. The media, by and large, seem willing to engage in a false balancing exercise between sober scientists and anti-GMO campaigners whenever the issue is discussed. It’s what media experts call “false equivalence”—the strong tendency to give equal time and credence to varying “sides” of a story, even if only one side’s views are grounded in empirically verifiable research.

Mainstream scientists—almost all of whom are politically liberal—are finally beginning to speak out about the false equivalency problem that has plagued the media’s coverage of the genetics revolution and global food security challenges. The latest to go public is molecular biologist Alan McHughen, who wrote a comprehensive take down of the junk science profiteers in the anti-GMO movement in an article last week in Canada’s Troy Media chain of newspapers.

The media, he wrote, often mis-frames “controversies” as merely differences between two equally valid positions. When a scientist reports something later proven wrong, he or she is held accountable by peer review and the sharp opinions of competing researchers. But activists elude that accountability, he wrote, because they are judged by a media that often lacks scientific expertise and can be swayed by passionate rhetoric and anecdotal “evidence” in lieu of empirical studies.

“[T]he junk scientist, when called out on an incorrect prediction, simply moves on to the next issue or the next book,” McHughen wrote. “No accountability, no defending past statements when they are shown to be false. Social media fuel the fire, as anyone can publish any outlandish junk science claim on the Internet. But when a plant breeder develops a strain of rice that is enhanced to help overcome vitamin A deficiency, rampant in poor tropical countries, the media interview (and give prominence to) pseudoscientific scaremongers like [Jeffrey] Smith instead of authentic experts in nutrition or agronomy, people who might actually bring legitimate questions and concerns to the discussion.”

We are in deep trouble, McHughen noted, when the media and the public are willing to equate the views of Jeffrey Smith or Jeremy Rifkin with those of Norman Borlaug, the Nobel Laureate and one of the pioneers behind the green revolution that has saved tens of millions of lives. Borlaug, it happens, is an ardent proponent of GM technology.

“Overcoming junk science and allowing a truly informed public debate on both the risks and benefits of GMO crops and foods require supporting legitimate research into GMO safety and providing the results to the public in a transparent manner,” McHughen  wrote. “Until this occurs, the junk scientists will continue to solicit donations by invoking the Big Bad GMO in order to strike fear into the hearts of the unsuspecting populace.”