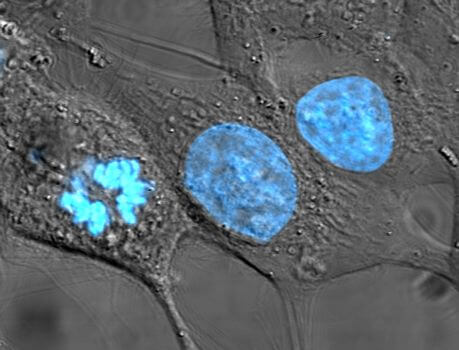 Genetic privacy is not a trivial issue. We are in the early stages a personalized medicine revolution that promises to deliver tangible solutions to complex diseases, but progress comes with growing pains. This has been underscored by the bubbling brouhaha over the public release last month of the first high resolution genome sequence of the “HeLa” cell line—the lab-grown cells of a poor black Southern tobacco picker who died in obscurity in 1951. Her story and the fascinating tale of her “immortal cells” are chronicled in Rebecca Skloot’s 2010 book, The Immortal Life of Henrietta Lacks.

Scientists can “immortalize” cell lines by preserving them indefinitely in a laboratory where they can be grown, divided into different batches and shared for research purposes. The HeLa cells, the first and most famous immortal human cell line, are derived from tissue samples taken from Lacks, who had cervical cancer.

Laboratory-grown human cells have since helped science learn the intricacies of how cells work and test theories about the causes and treatment of disease. These cell lines have led to scientific breakthroughs ranging from a polio vaccine to in vitro fertilization, from cancer drugs to cloning.

So what’s the controversy? Last month, scientists at the European Molecular Biology Laboratory reported that they had performed the first high resolution genome sequence of the popular “Kyoto” variant of the HeLa cell line; they published this genomic data without consent from Lacks’s family. Other databases had published portions of Henrietta Lacks’s genetic data, also without consent, but this highly publicized report struck an ethical nerve.

If one of our personal genomes is made public, anyone and everyone could conceivably gawk at deeply personal facts—from how we might live to our behavioral tendencies to the likelihood of our becoming a great athlete or scholar to the possibility of contracting a fatal disease or succumbing to alcoholism. Some people might be nonplussed about such disclosures—after all DNA is not destiny but probability, and even then our ability to “read” this probability is still developing—but others would undoubtedly be deeply offended, their expectations of privacy violated. Furthermore, the genome sequenced was not that of Lacks’s health cells or even that of her original tumor, but that of a cell line which has had time to diverge from the genome of Henrietta Lacks herself.

As Skloot noted in a New York Times essay, Lacks’s genes had been harvested in an era before genetic privacy guidelines were discussed, let alone established. The tissues from which they were derived were discarded in 1951, and no laws at that time prevented the use of such material without consent. The young woman’s family didn’t learn of the cells’ existence or the subsequent use of her children in research until 20 years after her death. The Lacks family’s medical records were later released to the press and published, again without consent. There are currently no legal restrictions on publication, so the family was again not consulted when the full HeLa line genome was published in March.

Some scientists were distressed. “Holy fuck,” wrote Jonathan Eisen, a genomics researcher at the University of California, Davis, who also tweeted: “A bit stunned that the people publishing the HeLa genome appear to not have gotten consent from the family.” The Lacks family was in fact outraged. “That is private family information,” said Jeri Lacks-Whye, Henrietta’s granddaughter. “It shouldn’t have been published without our consent.”

As soon as the ethical storm hit the scientists who published the genome, Lars Steinmetz and his team, spoke to the Lacks family, apologized and pulled the genomic data from public databases. “We were surprised, we did not expect this to happen at all,” Steinmetz says. “We wanted to respect the wishes of the family, and we didn’t intend to cause them any anxiety by the publication of our research.”

Some scientists are concerned that the criticisms may spark an unfortunate counter-reaction, although they understand the personal affront people may feel when personal data are published. Last November, at the annual meeting of the American Society for Human Genetics, another team of researchers presented an even more detailed analysis of the HeLa genome to much less controversy. (Although their summary remains unpublished, and now will likely never be made public.) To prove the ubiquitous availability of the HeLa lines, Joseph Pickrell, a geneticist at Harvard Medical School in Boston, culled publicly available genetic data and assembled a draft of its genome, which he published on the blog Genomes Unzipped.

Other scientists argue that the string of billions of letters that detail the genetic information that makes up the HeLa cell lines have changed so much over time that no one could accurately tell anything specific about Lacks or her descendants. On Twitter, Yaniv Erlich, a geneticist at the Whitehead Institute for Biomedical Research, called that line of argument a “lie,” claiming the data could easily be linked to an individual or family.

According to Skloot, anyone’s sequenced DNA can be uploaded to a public Web site called SNPedia, a Wikipedia-like site for translating genetic information. She communicated with one scientist who uploaded HeLa’s genome found in the Steinmetz study and within minutes SNPedia churned out a report full of personal information about Henrietta Lacks and her family.

The HeLa line, because of its well-known pedigree, is probably an especially recognizable anomaly—at least for now. Any discussion of ethics needs to respect the line between reality of problems and potential for problems. Some commentators — like Virginia Hughes at Slate — have argued that we’re overstating the potential harm of genetic information. She argues that many people in the genetics community are “fostering a culture of DNA fear when what we really need is a realistic and nuanced genetics education.”

Nature contacted several researchers but none knew of any cell lines that could be linked to individuals or family members. That could change, however, if participants in large genomics projects also participate in genetic genealogy and chose to make their data available in shared databases.

Every cell line studied by ENCODE is publicly available, and could conceivably be analyzed for ancestry or disease risk. Though the identities of the donors is not known in most cases (besides HeLa), using techniques linked to SNPedia or those used by Gymrek et al., it may be possible to link cell lines to last names, and thus genetic information to individual people. Eventually, with stunning technology and rock bottom prices for sequencing and analyzing equipment, almost any educated person could reproduce someone’s genome from just a few snippets of data.

“No one knows what we may someday learn about Lacks’s great-grandchildren from her genome, but we know this: the view we have today of genomes is like a world map, but Google Street View is coming very soon,” wrote Skloot.

One of the more interesting twists in this developing storyline is the muted reaction by many scientists (with of course notable exceptions, such as Eisen) to the ethical conundrum of how to deal with genetic privacy. After all, many cell lines propagated in labs were established without donor consent, including some embryonic stem-cell lines. Today, countries and even individual institutions differ on whether researchers should obtain consent before using abandoned patient material, as happened in the Lacks’s case.

“It’s one of these complicated limbo situations where there are these tremendously useful cell lines that were acquired in an era of different consensus ethics,” says Ewan Birney, a computational biologist at the European Bioinformatics Institute near Cambridge, UK.

It’s tempting to reflexively embrace ultra-strict regulations that limit all research involving individual cell lines. That would satisfy the professional scolds, but it would be unwise. What are the appropriate limits on cell line collections and gene sharing to ensure both reasonable privacy and research flexibility? What happens when individuals give their consent to data mining but family members, who share some of that person’s DNA, object?

There is no question that we need a vigorous debate and the establishment of a “protected environment” for collected cell lines. But if restrictions are too heavy-handed they could stifle research. We need to proceed cautiously. There are no easy answers here unless we are prepared to shackle researchers with overzealous regulation. As Nature has observed, researchers, funders and journals should move promptly to come up with better guidelines; unless they self-police, blunt restrictions will be imposed on them, and scientific progress could suffer.

[UPDATE: 3 April 2013, 4:25 p.m. — This article was changed to better reflect the nature of the data published. It was not that Henrietta Lacks’s entire genome had been made public, rather that a team of researchers had published the first high-resolution genome sequence of the HeLa cells. Thanks to commenter “Some Geneticist” for pointing this out.]