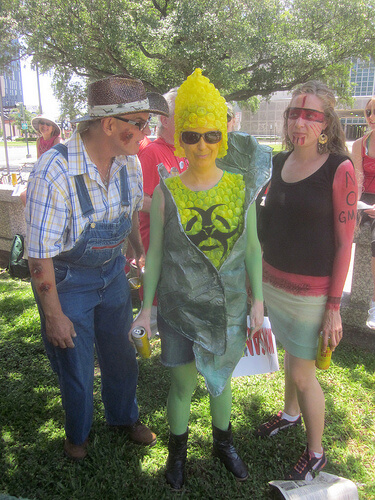 Exaggerating the meaning of Independence Day, on July 4th Roseanne Barr formally joined the ranks of anti-biotechnology cranks by tweeting that the deadly virus that almost wiped out the Hawaiian papaya until a genetically modified version was introduced to save the fruit was actually caused by GMOs.

It’s the kind of crackpot nonsense that anti-biotech crusaders circulate as a matter of course. What’s disheartening is how this obvious canard was approvingly passed along by major anti-GMO websites and activists. To those of us who believe that science and reason rather than fear should drive the debate over the future of food and the farm, it raises a provocative question: How can the ‘science side’ of the debate discourse with ideologues? Is there enough in common to hope for constructive public dialogue?

This question has been on my mind for weeks, in the wake of the Biotechnology: Feeding the World, or a Brave New World of Agriculture? forum held in early June in Washington, D.C. Intriguingly over the past few days, a healthy debate has erupted over whether public forums are the best way to engage the issue.

Mainstream scientists and science-minded journalists like myself are always hopeful that we can refocus public attention on the “weight of evidence” of peer reviewed science and constructively influence the political decisions that determine the regulation of crop biotech innovations. Are we too optimistic?

As is now well known, the forum held at the CATO Institute was originally scheduled to be a debate between a journalist and a scientist in favor of using the agricultural biotechnology (including genetic modification) facing off against those who were against it, but at the last minute the anti-GM debaters—Jeffrey Smith and Gilles-Eric Séralini—pulled out. I reconstituted the program to instead address the history and challenges of crop biotechnology, with Kevin Folta of the University of Florida challenging the myths of agricultural biotech critics, and Karl Haro von Mogel of Biofortified talking about the coming generation of genetically engineered plants with unique traits that are not now widely known.

Based on the feedback that we’ve heard, the forum was informative and helpful. It was broadcast on the web, and is still viewable at both Biofortied and at the Genetic Literacy Project, as well as at CATO. But did it change anyone’s mind? Was this the right venue? Do public discussions even work? That’s now the subject of an interesting dialogue that’s developed on the Biofortified site.

Even before the CATO event turned from a debate into a forum, Nina Fedoroff, a Penn State University faculty member whose scientific bonafides include being past President of the American Association for the Advancement of Science (AAAS) and a member of the National Academy of Sciences, urged me in an email to drop the idea.

“The scam artist always wins such a debate,” Fedoroff wrote me.  She was sure Seralini and Smith wouldn’t offer to back their polemics with science, but she didn’t think they would need science to “win” in the eyes of observers; all they would have to do, she said, is show the Seralini’s lurid photographs of cancer-riddled rats.

“Once you rouse the fear response, not much of anything gets through and these folks are very good at doing that. You’ll remember just a glimpse of Seralini’s rats with tumors much, much longer than you’ll remember a mountain of words discrediting his study.”

Is there any scientist in the world, I asked, who might serve as an effective counterpoint? No, she said. “Don’t set up another well-meaning scientist to be a victim” of their anti-science crusade, she warned me.

That was the position taken by Mark Hoofnagle, a medical doctor and physiologist who writes the respected Denialism blog at National Geographic, in a Biofortified discussion that recently erupted over the holidays.  Here is his post:

As Hoofnagle has previously argued, people come to events such as this because they have strong opinions not because they are open to considering new ideas. They are cheerleaders for one side or the other. In fact, data suggests the more informed someone becomes on a subject, the more dug-in they are likely to be. Facing ideological conflicts, people simply do not respond to information and change their mind.

Hoofnagle’s views coincide with those of many leading science educators like National Center for Science Education’s Eugenie Scott, Richard Dawkins and the late Stephen J. Gould. Hoofnagle refers readers to research by Don Kahan. His bottom line: It’s not worth the effort to engage ideological cranks.

Anders and Hoofnagle also raised a corollary issue: Even if we believe debates of this kind are worth the effort, should we have agreed to a debate at the CATO Institute, which is well known for its skepticism—many would call it denialism—of climate change.

“At issue is if whatever small gain there might be from this appearance that was, let’s be honest, mostly preaching to the converted, offsets the credibility afforded to Cato which is, by and large, an anti-scientific organisation [sic],” wrote Anders.

Hoofnagle was even more adamant. “Do you see how working with global warming-denying conservative think tanks is undermining your credibility on environmental issues even with your allies? Because I tell you, I’m unquestionably a defender of the technology, and I am frankly disturbed….”

Bodnar jumped into the fray. “I think ‘working with’ is a huge exaggeration,” she responded. “There’s no ongoing activities, no partnerships, nothing like that. The original goal was a debate and CATO was simply providing a podium and microphone.

Although we all acknowledge the uphill battle we faced in confronting close-minded ideologues, Bodnar, Kevin Folta, Karl Haro von Mogel, and I all agreed that we are not categorically against public debates with the Antis or participating in forums held at organizations with a strong ideological bent.

“I’m willing to get behind podiums wherever they are to discuss the science of biotech and other ag topics, no matter whose podium it is (within reason),” Bodnar added. “I’ll happily speak to groups who are anti science on some things, whether they are on the right or left. It doesn’t mean I endorse their anti science positions.”

“Points taken on this,” added von Mogel. “If I were to plan and propose a similar such event in the future, I wouldn’t propose to do it hosted by an organization disliked by the target audience, politically or socially (or scientifically). But I think you come down too hard on agreeing to participate when asked. Would you turn down a chance to go on Fox News to talk a little plant science?”

“I’ll go to any forum to extend this message,” Folta responded. “I’ll talk to witches, neo-Nazis, cub scouts or those in vegetative states. It is about education and educating anyone that will listen. In some cases, like in my personal feelings for CATO, many groups need exposure to science and the scientific method. They need to know how science works. … That is EXACTLY why scientists need to jump at the opportunity to get in front of [organizations that liberals believe are anti-science]. We need to shake their hands, look them in the eyeballs and let them know that we are out there advocating hypothesis-driven science.”

As one reader wrote in response to Folta’s post: “You remind me of Winston Churchill’s statement: “If Hitler invaded hell I would make at least a favorable [sic] reference to the devil in the House of Commons.”

I was equally as adamant. “Everyone at CATO handled themselves professionally.” I noted. “As a consequence, this issue was discussed in a variety of forums across the ideological spectrum. I wonder how people would have felt if this forum had been sponsored by, say, Mother Jones magazine or the Center for Food Safety? Those are self-proclaimed ‘progressive’ organizations that are icons of Ludditism on this issue. Although their science standards on genetic issues is extremely low, I for one would welcome a debate even though their overall stance on this issue (and frankly some other ‘disruptive technology’ issues) is bereft of science. Maybe I’m naive, but I believe it’s healthy for this issue to be debated/discussed from a science perspective in as many forums as possible—right, center, left, libertarian, etc.”

Hoofnagle eventually suggested a counterpoint perspective to his (and Fedoroff’s) ‘never debate the nabobs’ belief—an analysis by D.J. Grothe, president of the James Randi Educational Foundation:

I disagree that directly engaging the fringe is not useful. This is because, as a veteran of a few debates and a lot of direct engagement with creationists over the last 15+ years (and dozens of other debates and direct engagement on other interesting topics, like the proper role of religion in public schools, the existence of God, gay marriage, etc.), I have a pretty firm faith in public debate, in directly engaging my cultural competitors. I have to believe that the best ideas, argued well, will rise to the top. And shouldn’t science educators and science communicators and other professional truth-tellers be willing to engage their cultural competitors publicly, knowing that the best ideas will win if effectively communicated? Or should the destructive ideas of conspiracy theorists and others be ignored, ridiculed, or only addressed in the academy, unavailable to the wider, interested, low-information public.

It appears that Grothe—like me, Folta and the good scientists at Biofortified—would have endorsed our decision to engage the Antis even at a think tank that some view as anathema to climate science. Call us, as Matt Ridley might say, rational optimists.

Grothe writes: “[F]atalism, such rejection of any attempt to directly challenge conspiracy theorists of all stripes in public debate or argument, seems to foreclose any meaningful opportunity for mutual understanding, and seems far too acquiescent to the view that those who have fringe and unsupportable views will never be able to change their minds. Instead, I say Let The Best Ideas Win.”

What do you think?