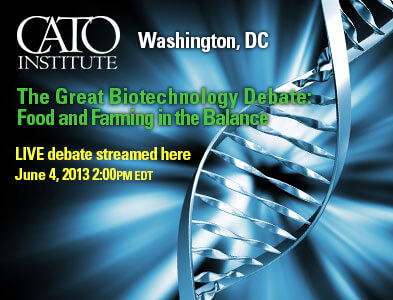 Over the weekend, the cartoonish ‘March Against Monsanto’ played out in many cities across the United States and the world, invariably to small crowds—although the organizers and anti-biotech NGOs did their best to claim inflated numbers in an attempt to garner headlines.

One of the biggest disappointments for organizers was in foodie central, Denver, where an estimated two hundred people (organizers had predicted 5,000) turned out to hear anti biotech author and activist Jeffrey Smith rail against Monsanto.

That’s the same Jeffrey Smith who earlier last week withdrew from the planned “Great Biotechnology” debate scheduled for June 4 at the CATO Institute in Washington, DC. The event was shaping up to be a genuine first—a civil discussion between pro-science advocates sympathetic to the role of biotechnology in food and farming and dedicated opponents who believe transgenic foods are a violation of nature and harmful to humans and animals.

Smith, if you’re not familiar with him, founded an organization known as the Institute for Responsible Technology. He’s written two anti-biotech self-published books and produced a documentary narrated by the wife of Dr. Mehmet Oz, whose show he has appeared on numerous times to rail against Monsanto and crop biotechnology.

Oz often characterizes Smith as a “scientist.” However his employment history reflects no formal training in any aspect of science, let alone biotechnology. Keith Kloor, who writes a respected blog for Discover, refers to him as a prototypical purveyor of pseudo-science. “He is the equivalent of an anti-vaccine leader, someone who is quite successful in spreading fear and false information,” Kloor writes.

As Kloor notes, Smith’s Wikipedia bio seems a fair representation of his cult following and importance among anti-GM campaigners:

A variety of American organic food companies see Smith “as a champion for their interests”, and Smith’s supporters describe him as “arguably the world’s foremost expert on the topic of genetically modified foods”. Michael Specter, writing in The New Yorker, reported that Smith was presented as a “scientist” on The Dr. Oz Show although he lacks any scientific experience or relevant qualifications. Bruce Chassy, a molecular biologist and food scientist, wrote to the show arguing that Smith’s “only professional experience prior to taking up his crusade against biotechnology is as a ballroom-dance teacher, yogic flying instructor, and political candidate for the Maharishi cult’s natural-law party.” The director of the Organic Consumers Association says Smith is “respected as a public educator on GMOs” while “supporters of biotechnology” have described him as “misinformed and misleading” and as “an activist with no scientific or medical background” who is known for his “near-hysterical criticism of biotech foods.”

When I was putting together this panel, Smith was clearly the perfect choice to represent the “other side.” After all, in controversies, you don’t get to choose your opposition; the public does that for you. For whatever reason, Smith has become wildly popular among the antis, and his books—however dubiously written and sourced—are cited as canon by rank and file protestors.

Despite his questionable reputation among serious scientists (he is often referred to in conversations with top geneticists as a ‘scam artist’) over the course of the months planning this event we talked many times. I found Smith to be engaging, witty, and in his own way very smart. I too wondered if he was a huckster, cashing in on his new celebrity; I can say, honestly, I found him nothing if not sincere. At every step along the process, he demonstrated integrity. I believe his understanding of science, risk and genetics are frighteningly thin, but I don’t believe the misinformation he is spouting is entirely calculated. I like him to this day, and hope at some point we can re-engage in a civil and open discussion.

Smith and I are communicators, although of two very different kinds. As we were planning the event, we agreed it would be best to bring scientists into the mix. He opted to recruit French professor Gilles-Eric Seralini of the University of Caen, whose paper released last fall claiming that rats fed Monsanto’s genetically modified corn developed multiple cancerous tumors turned him into a global celebrity among anti-biotech campaigners. The anomalous study was savaged by mainstream scientists and rejected by every major independent research organization in the world that reviewed it. It was rife with methodological problems and obvious ideological biases.  Nonetheless it has become a poster child for “GMOs will kill you” and Monsanto conspiracy theorists. Seralini, who agreed to join us via Skype, was the best the anti-biotech campaigners had to offer.

To counter Seralini, I originally recruited Anastasia Bodnar, a biotechnologist with a degree in sustainable agriculture who was previously a President’s Management Fellow and worked at the National Institutes of Health. Most notably she is co-director of the non-profit Biology Fortified a site popular among young sustainability focused scientists, geneticists and food experts.

However, because of a work conflict, she had to pull out. On short notice, I recruited a more than capable replacement in Kevin Folta, Interim Chair of the Horticultural Sciences Department at the University of Florida. He’s published two seminal texts on genomics and dozens of articles, and actively engages biotech issues in public. Like Bodnar, he is one of an emerging group of post-ideological scientists who understand the constructive potential of biotechnology.

The debate began to unravel just two weeks before the scheduled event. Smith objected to the unexpected substitution of Folta, who is an active online presence, engaging and debating campaigners and carefully laying out counter, science-based arguments. Smith immediately balked at the substitution. According to Smith, Folta had “crossed the line” in some criticisms of him, although he didn’t provide any examples. His nerves clearly jangled, Smith ultimately decided he was not comfortable with Folta, and said he would not debate. He then said he had too many commitments, and could not prepare for the event even if he had wanted to. He then promptly flew off to Denver to address a relative handful of fellow anti-Monsanto conspiracy theory protesters missing out on the opportunity to talk with tens of thousands of people through this Internet streamed debate.

Seralini’s withdraw was equally messy. After Smith’s decision, he suddenly decided that my previously published criticisms of his studies were “libelous” and that he would never be involved in a debate with me. In fact, I had posted a number of articles in Forbes about the Seralini Affair seven months ago; he was well aware of those, as he had reference them in communications in the weeks prior to his pullout.

Why the sudden turnaround? Seralini sent a torrent of bizarre notes, saying he would not debate Folta because he was not a toxicologist and only a toxicologist would fairly review his work. Folta, of course, is a prominent plant geneticist that reviews and edits scholarly work across disciplines.   The Great Debate was never going to focus entirely on Seralini’s controversial study; it was about the future of food and the farm. But the hubristic French scientist apparently had been expecting to turn the debate into the Eric Seralini Show; when he finally realized he’d have to debate science—and the broad issues of biotechnology and world food security—he panicked and withdrew.

It’s only a guess, but I believe Folta scared the bejeebers out of him. Folta is a dogged defender of science, with a nuanced understanding of the benefits and the challenges that accompany this powerful but complicated technology. He’s not afraid to go on the web or into public hornet’s nests to make the case for science.

Folta and I, with CATO’s support, are committed to going on with the public event. We will present both sides of the issue—in fact we will go out of our way, for the sake of a vigorous public discussion, to “make the case against biotech crops.” This is a debate worth having. We may yet add a third presenter. Stay tuned for updates. Please do check out the event on Tuesday, June 4, 2:00-4:00 pm Eastern Time. It will be streamed live on CATO’s site as well as on the Genetic Literacy Project.