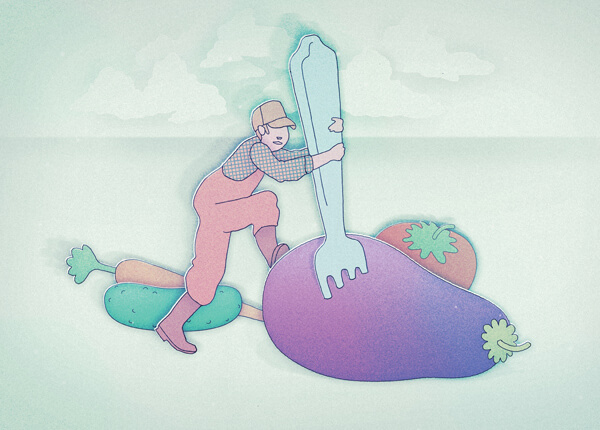 Journalists always claim they scrupulously rely on empirical evidence. Many prominent reporters, especially those at self-described “progressive” publications, see the world through a narrow ideological prism—they just don’t realize (or won’t admit) it.

That’s been the case for years at the otherwise respectable environmental news site Grist on the issue of agricultural biotechnology. This is why the current series by food writer Nathaniel Johnson reassessing Grist’s own coverage of crop biotechnology has been so refreshing.

Until last week, Grist’s embarrassing coverage was led by Tom Laskawy, who seems to embrace every known anti-biotech conspiracy theory and credulously promotes poorly designed, over-hyped one-off studies by activist scientists. (He started off this week with an attack on so-called “superweeds,” claiming a problem common to poor crop management in general is an exclusive consequence of crop biotechnology.

Those of us who do stick to empirical evidence have chafed at the careless and frequent abuse of the public trust by politicized journalists like Laskawy and Tom Philpott at Mother Jones (who cut his teeth at Grist).  We’ve seen the political right sacrifice objectivity to ideology on climate issues. Now, on the left, journalists are doing the same on a range of issues involving “disruptive technologies”—nuclear energy, energy extraction (fracking) and the use of advanced chemicals in agriculture, industry and household products. Not one of these issues, however, provokes the same fervor and disregard for empiricism that pollutes “progressive” reporting about crop biotechnology, especially the genetic engineering (GE) of crops and foods.

Anti-biotech crusaders have turned opposition to GE crops into a litmus test: You’re with us or you’re against us. It’s a wartime mentality. The battleground shifts: from California’s Prop 37 to the Washington State labeling initiative to the ordinance in Kauai. But wherever the issue is in play, hard-edged green advocacy groups and sympathetic journalists promote a “see all evil” perspective, wherein the sinister influence of Monsanto lurks over every field of GE crops.

How can science journalists refocus the public’s attention on empirical data and away from fear mongering? We see hopeful signs of that happening with journalist-blogger Keith Kloor, plant geneticist Kevin Folta, and young scientist-communicators like Anastasia Bodnar and Karl Haro von Mogel at Biofortified. Now we at the Genetic Literacy Project offer suggestions for additional steps journalists might take to help improve the coverage of agricultural biotechnology.

The slow road to Damascus: The science version

Consider the road traveled by Mark Lynas. Spurred by his connections to activist groups, the British journalist emerged during the 1990s as a vitriolic critic of genetically engineered crops and foods. It took him years to realize that he had been seduced as a young journalist by the ideology of green movement at the expense of his rational reporting. It took him years to muster the courage to abandon his green crusader style and embrace instead a ‘weight of evidence’ approach to his reporting.

“This means jettisoning some fairly sacred cows,” he confessed. His candid and heartfelt conversion, underscored by a public apology this past January, shocked the anti-GE left and provided great momentum to the cause of empirical science journalism. As a consequence, he is treated by some left ideologues as a pariah. He is now regularly attacked as a corporate shill because he dared break with green dogma.

It will be interesting to see if Johnson, at Grist, faces the same ridicule for his current series. Grist has been one of the most retrograde publications in the world when it comes to reporting on the science of agricultural biotechnology, and it has cultivated a readership that, by and large, shares its irrational hatred and fear of genetic modification. Based on the first two articles in Johnson’s series, published last week, Grist seems to have finally awoken to the reality that its coverage of all matters GE had become—like Mother Jones’—a joke in the science journalism community.

“My goal here is to get past the rhetoric, fully understand the science, and take the high ground in this debate,” Johnson wrote in his introductory piece. “There are parallels between opposition to GM crops and other embarrassingly unscientific conspiracy theories. If there are grounds to oppose genetic engineering, they will have to be carefully considered grounds, supported by science.”

“I’m going to start with the most politicized issue,” he continued. “Is there any evidence that genetically modified food is directly harmful to people who eat it? There’s a one-word answer to this: no.”

Johnson’s second piece showed that he was not afraid to take on the anti-GE left’s most cherished beliefs. His review of claims about the alleged dangers of GE foods (regularly hyped by Grist and Laskawy in particular) was refreshing in its balance and tone. He firmly rejected one of the most tiresome misstatements of anti-GE campaigners—that the FDA is in bed with industry and its approval is little more than a “rubber stamp” because the government does not require safety testing of GE crops and foods.

“[A]fter doing this reporting,” Johnson wrote, “I won’t be saying that there’s no required safety testing: saying so implies that GE food is unregulated and untested, and that simply isn’t the case. The FDA does a thorough job; it just focuses tightly on a few potential dangers, looking for allergens, amplification of toxins that naturally exist in the plant, and changes in nutritional composition.”

In his future columns—which we will feature regularly at the Genetic Literacy Project—Johnson promised to address whether he believes there is something fundamentally different about GE food that would require a radically different government evaluation and approval system, as anti-GE crop campaigners demand.

Why the sudden and surprising turn at Grist? According to independent sources Johnson has conversed with, he said he was asked by Grist to write this series because its editors and management had begun to think that they had veered far off base—that they had become invested in ideological conformity rather than science. If this is true, it bodes well for both Grist and science journalism.

Johnson’s bold reconsideration offers science journalists a moment to seize. The anti-biotech crusaders—from politicized publications like Mother Jones and the legion of campaigners among organic activists, natural products promoters and hard-line advocacy groups like Center for Food Safety, Greenpeace, Friends of the Earth, Natural News and even to so-called mainstream advocacy groups like Consumers Union and the Union of Concerned Scientists—relentlessly promulgate anti-GE propaganda. It is time for those of us who want a science-based, rational discussion of biotechnology to fight back.

Keith Kloor, a number of other science journalists and I have been quietly discussing how we can elevate science journalism on crop biotechnology. We’ve seen some progress over the last year. This was ignited in part by the almost universal revulsion among journalists over the Seralini fiasco, when activist-scientist Giles-Eric Seralini tried to control media coverage by limiting critical reactions to his shoddy study claiming that GE foods caused tumors in rats. Many journalists were further stirred by revelations from the Genetic Literacy Project that the White House had put a political block of the Environmental Protection Agency’s approval of the AquaBounty salmon. Then came Lynas’s public apology. Now Grist is challenging the anti-GE part of its base. How can we keep the momentum going?

Here is a plan: I am organizing the First Annual Crop Biotech Journalism Conclave (yes, we need a snappier title—all suggestions welcomed). We hope to convene the event as a lead-in to the World Food Prize Borlaug Dialogue scheduled for October 16-18 in Des Moines, and there is preliminary interest and support. I’ve also been in discussions with Calestuous Juma, Director, Science, Technology, Globalization at the Belfer Center for Science and International Affairs at the Harvard Kennedy School to host a conclave at Harvard, and he’s enthusiastically on board. I’m pursuing both options.

The goal would be to bring together a core group of journalists who are engaged in reporting the science rather than just echoing industry or activist talking points. I have a wish list (most of whom haven’t yet been contacted and if they read this, might be learning about this proposal for the first time):

Do you have suggestions—favorite reporters or bloggers not on this list that you believe cover crop biotechnology in a balanced way and whose work is well circulated? Are you writing and reporting on agricultural biotechnology? Want to become involved? Let me know. Post in the comments here or send me a private note at [email protected].

The “conclave” would include meetings that are public—open to anyone attending the Borlaug Dialog events or otherwise interested—and private, for the core group of invited journalists. We’d hold panel discussions and debates on the politicization of the crop biotech issue; the role of NGOs and the tension between science and activism; and other subjects yet to be determined. If we do this at the Borlaug Dialogues, we would also include a session in which we interact with foreign journalists, many of whom are coming to on their own or are being brought in to attend the main event.

Our first conference will be small—no more than two dozen journalists maximum, and possibly fewer. Presuming success, we will consider opening up this event in future years to more participants. We would also consider expanding public involvement and inviting representatives from the government and NGOs. Everything is on the table.

Looking forward to hearing from journalists and interested parties. Help us put science and integrity back into the coverage of agricultural biotechnology.

Jon Entine is the executive director of the Genetic Literacy Project and a senior fellow at George Mason University’s Center for Health & Risk Communication and STATS (Statistical Assessment Service).