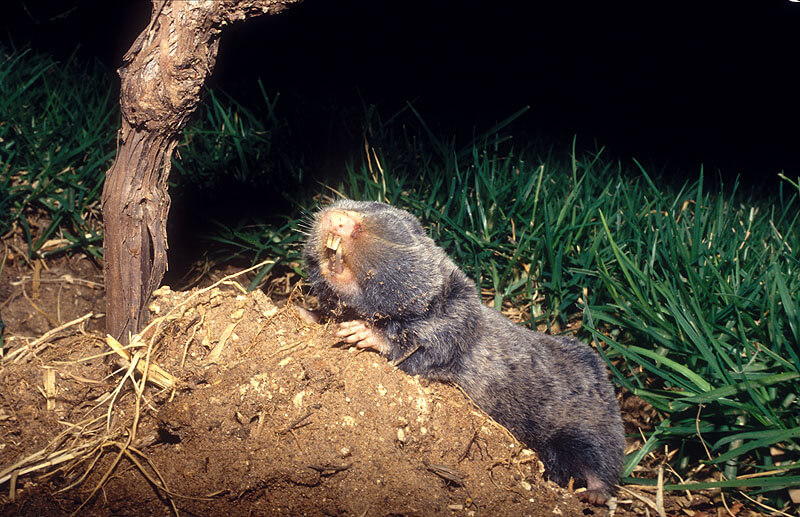 It is hiding in underground darkness and looks like a hairy sausage, and an agricultural pest. But biologists Aaron Avivi, Imad Shams and Irena Manov from the Institute of Evolution at Haifa University in Israel, believe that the Israeli blind mole-rat may save millions of human lives. Will this project get the support from the scientific community and philanthropists to fulfill its promise?

Most of us have never seen these strange creatures that spend their entire lives in underground trenches. In Israel, those who like hiking in nature or living in a suburban houses surrounded by a small garden are reminded of the existence of the blind mole-rat (BMR) during the winter when lines of fresh, loose mounts of earth appear overnight after a rainfall.

The lines of small earth mounts consist of 2-4 kg of dirt that the little Israeli blind mole rat, which weighs 100-200 grams and is 15 cm long, pushes when it builds its underground architectonic tunnel system that collapses during a typical Israeli rain season. These above ground “footprints” are the reflection of BMR tremendous potential for biomedical studies and may point the way to a cure for some human diseases.

Because the mole rat lives its entire life underground, it has adapted to this challenging habitat. In particular, it has the ability to survive abrupt and sharp changes in oxygen supply. Most of us live in 21% oxygen. Those who are fortunate enough to ski in the Rocky Mountains might be surprised when their hotel supplies them with a pack of Advil to go along with coffee and tea packets. However, they soon discover that even at only 4500 meters, with the relatively small decline in available oxygen, they often need these pills to relieve a headache, which is the first sign of suffering from lack of oxygen, namely hypoxia. In contrast, BMRs can survive for at least 8-14 hours even with only 3% oxygen, which is one third of the available oxygen on the top of the Mount Everest. Rats, which are an above ground distant evolutionary relative of BMR, and of similar weight, would die after an hour or two in 3% oxygen.

Hypoxia is a phenomenon that is directly connected to the most lethal ailments humans face in the developed world, namely heart and lung disease, brain strokes and cancer. As a hypoxia-tolerant mammal, BMR does not suffer from these clinical conditions. According to professor Avivi:

Actually, this creature can live for over 20 years, which is five times longer than its above ground relative, the rat, and shows no signs of aging and rarely suffers from any diseases. A twenty year old BMR is as strong and vivacious as a 2-years old, its muscle mass is also similar and its skin is as flexible and elastic as young family members. We hypothesized that if we succeeded in figuring out the mechanisms that endow it with a tolerance to a lack of oxygen and resistance to various diseases, we might understand better diseases in humans and hopefully find help and cure for people suffering from them.

In studying the hypoxia-tolerance of BMRs, the researchers noticed differences in structure and function in a long and growing list of genes when compared to rats and mice. Among these genes, there were quite a number that are major players in cancer initiation and development, as well as genes that contribute to the metastatic activity and capability of the original tumor, which is the worst and most horrible phenomenon of this deadly disease. Further studies using the state-of-the-art genomics that can reveal the pattern of expression of the whole repertoire of genes in a given tissue demonstrated that there are differences in expression profiles between BMRs and rats, exposed or not to hypoxia in molecular and biochemical pathways connecting hypoxia with cancer.

The team added to these observations the fact that since the founder of BMR research, Professor Eviatar Nevo, had started his interdisciplinary studies 40 years ago, no individual BMT among many thousands showed any signs of any spontaneous tumors. The scientists concluded that they might have a “clinical goldmine” in their hands

In a manuscript, just published in BMC Biology, Avivi, Shams and Manov, together with other colleagues, have tried to use this accumulated knowledge and take it to the next level. In their first experiment they decided to test if cancer can be induced in live BMRs. They took mice and rats and mole-rats—young ones, about 2 years of age, and old ones, more than 10 years old—and treated them with carcinogenic substances.

“The old BMRs were added because the older all of us are, the more susceptible to diseases we are,” said Avivi.

One carcinogen induced soft-tissues sarcoma. After two to three months, all of the mice developed the expected cancer. After four to six months, all of the rats did too. But nothing was observed in the BMRs! Nevertheless, they decided to follow them and see if something happened. After a year and a half, lumps were found in two of the BMR individuals, but the pathological analysis proved that they were not cancerous; they were abscesses, which are unresolved inflammatory reactions. After 22 months, we found one more treated old mole-rat with a lump, but this time it was cancerous. The scientists were then able to compare the expected tumors from mice and rats and the extremely delayed tumor from the mole-rat.

“First of all, I do not believe that any mammal is completely immune from cancer,” explained Avivi. “Such a declaration would be hasty in my opinion. Further, difference in time length and incidence in the development of cancerous cells in BMRs compared to mice and rats, might indicate different mechanisms employed by the extremely high cancer resistance of BMR.”

Another carcinogen induced skin carcinoma, which involves different cell types than sarcoma. Both mice and BMRs developed a necrotic wound after about 10 days.

“The wound in the mole-rats,” Avivi said, “seemed to be so serious. “I was sure that they were going to die just from its deterioration.”

However, in a week or two the treated BMR animals developed a scar, and then their skin completely healed. It took 3-4 months and all the mice developed the expected skin cancer. This demonstration by the Israeli researchers is the first time that scientists ever have showed a species that is highly resistant not only to spontaneously occurring cancer but also to chemical carcinogens.

The Israeli team then propagated healthy cells—fibroblasts type, from blind mole-rats, rats and mice—and added another wild, above ground short-lived rodent, the spiny mouse, and another subterranean, long-lived and cancer-resistance rodent, the naked mole-rat.

“We added the spiny mice, which is cancer-sensitive, as we wanted to avoid devil advocates from saying, what I tend to accept our controls are inbred, almost “artificial”, laboratory animals,” Avivi explained. “And we added the naked-mole rat to test how these two evolutionary distinct, though subterranean rodents known to be cancer-resistant will behave.”

“Cells grow with a liquid solution, a medium, in a Petri dish that contains all the ingredients obligatory for their normal proliferation. However, along the growth of the cells, they secrete all kind of substances into this medium,” Avivi said. “We took the medium in which the healthy cells grew, which is termed conditioned-medium, to replace the regular medium that the cancerous cells grow in.”

This experiment revealed the real pioneering breakthrough of the study by the Israeli team. They believe they have shown that all the cancer cells used eventually died when co-cultured with BMR normal cells or when fed with the medium conditioned by normal BMR cells. The pilot experiment where these scientists examined normal cells from the naked mole-rat exhibited a similar picture as the one received with the BMR cells, which, as Avivi emphasized, “doesn’t necessarily prove that both use the same mechanism to reach the final, similar outcome.”

Notwithstanding, no harm was caused to normal, healthy cells that originated from the species used in the study upon their interaction with BMR cells. Furthermore, the direct, unique contribution of BMR cells to the death of cancer cells was proved in an experiment where the scientists removed the medium conditioned by BMR cells and replaced it with fresh normal medium usually used to grow the cancer cells. Those cancer cells that were not yet affected by the BMR cells regained their ability to divide.

The astonishing original observation of the study is that there is a substance (or substances) that is uniquely secreted from BMR cells that interact with a component on cells membrane that is active only in cancer cells that leads to the death of the cancer cells. The promising side of their findings is, of course, that whatever is secreted from the BMR cells can kill different human cancer cells, which once identified might be developed into a medicine that will kill cancer cells in their early stages and cure human patients.

“Now we need to take the medium in which BMR cells were grown and try to identify, and isolate and purify the BMR’s anti-cancer secreted factors,” Avivi said, “Our problem is that we are financially broke. We can see the Promised Land but we might not get to enter it.” Avivi elaborated:

From the very start of cancer research, scientists have always worked on lab mice, as they are well known and characterized animals that are inbred in animal houses for hundreds of generations. Their life span is short and it’s easy to induce tumors in them. It will be wrong and boastful to undervalue the progress in understanding mechanisms of cancer induction, progression and inhibition due to decades of studying mice, and I will be the last to do it. But the most renowned and leading researchers that contributed the cornerstones and foundations of cancer studies by using mice, declare without reservation, that we haven’t managed to transfer this knowledge from mice to humans. The vast majority of past studies did not reach the clinical stage. The consensus is that it is quite impossible to make a prediction from mice and apply it to humans. I can cite one of these well-known scientists, Prof. Robert Weinberg from MIT, who said in 2008 that sticking to the conservative paradigm of using mice is the major obstacle to progress in human cancer research, and what we miss is the right animal. I dare to declare that our results suggest that we might have found the missing animal that will help in the effort to cure humans of cancer. The ‘built-in’ mechanism that defends BMR from cancer, a mechanism that was developed and fine-tuned over tens of millions of years of evolution, may be the key for helping human cancer patients.

What I wish to share with the readers, among them (we hope) philanthropists with a vision, is our frustrating experience with grant foundations that routinely reject our proposals to fund further research, even though we score excellent evaluations, on the grounds that they do not support studies with wild, unknown non-classical animals because “any worthwhile question should be accessible in a well-established model—that is, mice.

We are not alone in facing this frustrating situation. Last year, the respected Nature journal devoted an editorial entitled, “Model organisms: There is more to life than rats and flies.”

Our team has approached potential donors for more than a year without success. So, if there are philanthropists who might seriously consider our request for support, but hesitate, we would ask them to read this article. Maybe it will tip the scales in our favor.

Aaron Avivi, PhD, Prof. of Research, Head of Laboratory of Subterranean Mammals Biology at the Institute of Evolution of the University of Haifa, Haifa, Israel. Email: [email protected]