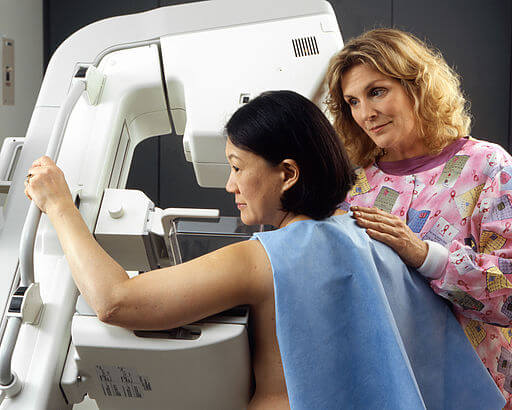 Ashkenazi Jewish women are more likely to carry breast and ovarian cancer-causing mutations in the BRCA 1 and 2 genes more often than women of other ancestries. However, the medical community has assumed that offering tests only to women with a known family history of these cancers allowed for a conservative but safe genetic screening protocol to evaluate these women.

But a new study of Isreali Ashkenazi Jews showed that many women without a known family history of the disease tested positive for one of the three BRCA mutations and developed cancer at substantial rates:

Researchers found these women by first looking at their brothers, fathers and sons. They offered BRCA status testing to 8,000 Ashkenazi men who’d never developed cancer. They identified 175 carriers, then tested their female relatives. More than 200 women, most of who had never had a family history of breast or ovarian cancer were identified in the study.

BRCA mutations can be passed down through fathers, thereby eliminating the chance that a first degree female relative would have ever developed breast or ovarian cancers. Men with BRCA mutations are more likely to develop prostate cancers.

Many groups have pointed to this study and the discovery of silent BRCA carriers as a call for universal screening, both among women of Ashkenazi heritage and all women.

Mary-Claire King, the University of Washington geneticist who discovered the BRCA1 gene and was just awarded America’s most prestigious science prize, said every woman 30 or older should be tested for these mutations regardless of their racial or ethnic backgrounds.

The cost for testing would be ‘minimal’ King and her colleagues argued, and the first round of screening would identify 250,000 to 400,000 women who carry harmful BRCA mutations. Early detection would allow young woman to chose preventative surgeries to remove their ovaries or breasts. These surgeries could prevent development of the disease and consequently save lives, King and other proponents argue.

Other experts met the new push for universal screening with hesitation, citing the harmful effects psychological effects of knowing carrier status and the chance that women would elect to have these surgeries when there was not a true need:

Women who test positive face difficult choices. The risk-reducing options for them might include surgical removal of healthy breasts and ovaries, Dr. Susan Domchek, director of the University of Pennyslvania’s Basser Research Center for BRCA noted… “These are not trivial,” she said. “They have the potential to cause harm.”

Actress Angelina Jolie famously underwent a a preventative mastectomy in 2013, which some breast cancer experts worried would increased the chances that other women would over estimate their own cancer risks and request the surgery.

Other experts pointed out that universal screening protocols might not be necessary because anyone interested in their BRCA status can chose to have the test. However, the U.S. insurance system pays for testing largely based on established medical protocols, like BRCA testing for those with a family history of cancer. Patients without the required history who want to know their status may have to shoulder the cost.

But King, for one, isn’t buying the argument:

Critics may object that “women aren’t ready for this,” King said. But she argued: “Why should women be protected from information that will empower them and allow them to control their lives? We don’t need that kind of protection.”

Early screening allows women at high risk to be identified early, before most cancers would ever develop, and to enter into enhanced screening programs. For instance, yearly MRIs, which give clearer, more accurate pictures of breast tissue, can be used in place of traditional mammograms.

Ashkenazi women most often have BRCA-associated breast and ovarian cancers, while women from other populations often have non-BRCA cancer-causing mutations. That makes the Jewish community a good first step towards universal screening. But others argue that many women, especially within the United States, have some Jewish ancestry through intermarriage but don’t know it. These women would be harmed if screening was limited to Jewish women:

Meredith Knight is a blogger for Genetic Literacy Project and a freelance science and health writer in Austin, Texas. Follow her @meremereknight.