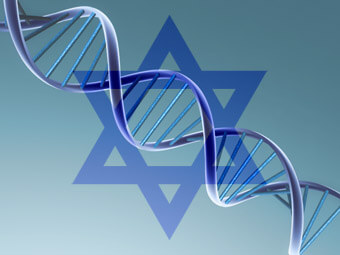 A team of researchers based at 11 labs in New York City and Israel has for the first time set up a database of genomes drawn exclusively from Ashkenazi Jews. The work is expected to be medically valuable not only for diseases common in this population but—with respect to cancer, for instance—for everybody, according to the paper’s senior author, Itsik Pe’er, an associate professor of computer science and systems biology at Columbia University.

But the research has also provided additional evidence for a current genetic theory about the origins of the Ashkenazim: that the founding population numbered no more than a few hundred people, Jewish men from the Middle East and the local women they married after they arrived in Europe.

The Ashkenazim are Jews who settled in Central and Eastern Europe, probably about a millennium ago. Their 13 million descendants, about 80% of the global Jewry, now live everywhere. About eight million live in the U.S., about 2 percent of the country’s population.

Because until recently they hardly ever married outsiders, the Ashkenazim possess gene variants rarely found in other populations, including some that cause devastating diseases like Tay-Sachs. Ashkenazi Jews also have an unusually high frequency of mutations that increase the risk of other diseases, such as Parkinson’s disease and the BRCA genes that predispose to breast, ovarian, and other kinds of cancer.

The new data resource is expected to improve genomic research in the Ashkenazim and lead to more effective personalized medicine for them. The researchers have collated complete genomes from 128 healthy Ashkenazi Jews and assembled a catalog of gene variants specific to that population. They plan to add 500 more complete Ashkenazi genomes to make the database even more useful.

The origins of the Ashkenazim

The team’s findings have also provided evidence that the Ashkenazi community was founded by a small group of a few hundred people. The paper, which appeared in Nature Communications on September 9, 2014, estimates the founding date to have been between 600 and 800 years ago.

Gregory Cochran, a physicist, wrote on his blog West Hunter that while he liked the paper in general, he believes this estimated settlement date isn’t quite old enough. Cochran is co-author with Henry Harpending, an anthropologist and population geneticist, of The 10,000 Year Explosion, a book about recent fast evolution of humanity; both are at the University of Utah.

The new paper puts the time between generations at about 25 years, but Cochran argues that 30 years is more likely. Also, he says, Jews were known to be in the Rhineland before the year 1000 AD. By his calculations, the original Ashkenazi settlement date was most likely between 900 and 1,150 years ago.

A number of different theories have been proposed to explain Ashkenazi origins. The one with the best genetic support now is that the Founding Fathers were Middle Eastern Jews who migrated to Europe and found their soulmates among indigenous Europeans. It’s another blow to the theory—promoted originally by journalist Arthur Koestler and more recently by geneticst Eran Elhaik—that European Jewry (Ashkenazim) are descendants of converted Kazars, a formerly pagan empire that ruled parts of Eurasia in the late first century. Cochran’s paper, which concurs with most current research, draws heavily on studies of Ashkenazi mitochondrial DNA published last October in Nature Communications. Genetic Literacy Project executive director Jon Entine discussed this paper here at the GLP.

Mitochondria are the small structures that provide energy to the cell. They contain only 37 genes, compared to the DNA in the cell nucleus, which contains about 25,000 protein-coding genes. But there are hundreds of copies of mtDNA in each cell, which makes them much easier to find and sequence than nuclear DNA, present in just one copy.

Mitochondria are never inherited from a father, only from a mother, who passes her mtDNA along to each of her children. Identifying different kinds of mitochondria in a population and comparing them  to what is known about the geographical distribution of different sets of mtDNA permits researchers to figure out where a population’s original mothers came from.

Michael Balter reported at Science that some of that mtDNA might have  appeared in Europe as long as 7,500 or more years ago, before farming came to the continent. “The closest matches were with mtDNAs from people who today live in and around Italy,” he said. Hardly any were from the Middle East.

If these studies hold up, one conclusion from them is that, among the Ashkenazim at least, the a a significant proportion of Jewish Mothers were not, in fact, of Jewish ancestry. In Halacha, Jewish Religious Law, the child of a Jewish mother is a Jew.

“If being Jewish is defined as genetically descending from the Israelites through the maternal line, then many Ashkenazi Jews fail the test, according to this data,” Balter says.

However, Jewish law explicitly rejects genetics as a determinative measure of Jewish lineage. An although some Orthodox Jews adopt a strict interpretation of matrilineal descent as a basis for being considered Jewish, Reform and secular Jews—the majority of the world’s Jewish population—do not.