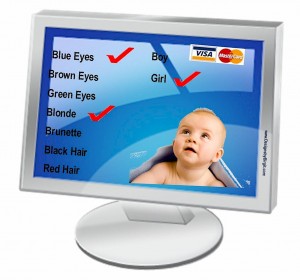 Should we tinker with the genes of our descendants? It’s been a futuristic ethical debate for half a century at least–a debate that intensified a couple of decades ago, when it became clear that genetic technology would get us to that decision point some day.

That day, it appears, is upon us. Assuming the rumors are true.

The rumors surfaced in a March 5 feature in the MIT magazine Technology Review. Antonio Regalado reported on some U.S. projects involving the new techniques for gene editing that permit easier, cheaper genetic modification of entire organisms, including us. These modifications would be permanent and passed on to future humans in gene-edited eggs, sperm, and early embryos.

Regalado reports that human genetic engineering of this kind is being explored in at least two Massachusetts labs, one at the biotech company OvaScience, and also in the UK and China.  He says, “The objective of these groups is to demonstrate that it’s possible to produce children free of specific genes that cause inherited disease. If it’s possible to correct the DNA in a woman’s egg, or a man’s sperm, those cells could be used in an in vitro fertilization (IVF) clinic to produce an embryo and then a child. It might also be possible to directly edit the DNA of an early-stage IVF embryo . . .”

Regalado says several researchers who declined to be quoted by name have told him this work is going on in a number of places and that papers describing the research are being reviewed for journal publication.  Those anonymous accounts of imminent publication are also reported by David Cyranowski, whose March 12 Nature news story is free to read at Scientific American.

If such papers are in fact in the pipeline, you can be sure that scientific journals will do what they can to rush them into print now that beans have been spilled to journalists. Outrage will doubtless greet the first published account of successful genetic modification of a human embryo. But journal editors will be willing to endure the indignation for the sake of Being First.

The response from scientists

The immediate response from one group of scientists has been to yell “Stop.” Five of them took to the pages of Nature March 12, urging their fellow scientists not to undertake genetic modifications of human embryos, even for research. The headline on their comment: “Don’t edit the human germ line.”

This has a familiar ring for those of us who were around for the famed Asilomar conference in 1975, when molecular biologists themselves called for a time-out until they could assess the risks of the brand-new efforts at genetic modification of organisms. Forty years of research have allayed most of those fears, if you don’t count the irrational outbursts that keep greeting agricultural GMOs.

The issue today hinges on a new technology: the proper use of recently invented methods for editing genomes. The best-known is called CRISPR. If you want to catch up briefly, I explained these techniques and their potential application to human genetic engineering here at GLP a year ago.

The occasion for that piece was a paper by Chinese scientists who used gene editing to produce genetically modified monkeys, the first success with germ line gene editing reported in primates. (“Germ line” has nothing to do with infection or microbes. Here “germ” is equivalent to “seed.” The germ line is eggs or sperm that carry genetic material from generation to generation.)

Cyranowski reports that this same lab is seeking permission from ShanghaiTech University to attempt gene editing of discarded human embryos. There would be no attempts to bring any edited embryos to term. The point would be to see if gene editing can be made to work at the earliest stages of human life.

At the summit of the slippery slope

The idea of correcting gene defects and preventing disease in ways that involve changing the germ line is not itself terribly controversial so long as the techniques are safe. Researchers need to show that gene editing will not lead, for example, to a deformed child.

“CRISPR is not ready for any human use—it is poorly understood—powerful— but poorly understood,” Arthur Caplan told me in an email. Caplan is a veteran bioethicist who heads the Division of Medical Ethics at New York University. Careful animal trials would have to be done before pursuing gene editing as the solution to any inherited disease, he said.

But even if the technique proves safe for human use, there’s always the problem that everyone calls the slippery slope: the point where the goal of eliminating a genetic disease in a potential child slides ineluctably into the goal of improving that potential child. Designer babies. The perfect child. Furthermore, the change is permanent, present also in the perfect child’s eggs or sperm, and so will be passed on to future perfect children.

The slippery slope has been the big concern for decades. As early as 1992, in a discussion of the future potential for therapeutic germ line modification, the Council for Responsible Genetics, an activist organization, noted that some people may look forward to introducing germ line genes for enhancement of offspring. The statement dismisses this thinking as “eugenics.”

In a 2001 revised version of the statement, CRG said, “Given that there are alternatives for avoiding the inheritance of ‘unwanted genes’, the main selling point of germline modification over the long term would appear to be the prospect of ‘enhancement’ of desired traits—designer children.”

Even so scientifically respectable an organization as the American Association for the Advancement of Science, which publishes the journal Science, in 2000 expressed concern about therapeutic uses of germ line alterations in part because of potential slippage into enhancement. The potential for harm is worrisome, its position paper said, but even safe germ line therapy could exacerbate prejudices against the disabled and widen the gap between those who can pay for such therapy and those who cannot. In addition, germ line alteration for enhancement “is particularly problematic,” and techniques for providing therapy “will make it difficult to avoid use of such interventions for enhancement purposes even when this use is considered ethically unacceptable.”

The slippery slope is also the number one concern of the scientists who called for a moratorium last week in Nature. Two of the authors are at Sangamo BioSciences in Richmond, California, which is hoping to exploit gene editing for therapy in children and adults, not germ line therapy. But they are also alarmed about the potential impact a very negative public reaction could have on the infant industry they are nurturing, using gene-editing to correct defects in particular cells of patients, for example blood cells.

Even where there are prohibitions, they may not cover every possibility. That’s the case here in the United States. Government regulations are quite strict about using federal money to experiment on embryos. Prior approval from an institution’s research review board would be required, plus approval also from an ethics advisory board appointed by the National Institutes of Health, according to Caplan. “With this Congress, that’s not gonna happen. However, there are currently no federal laws or regulations directly applicable to the use of embryos in privately funded research. So . . .”