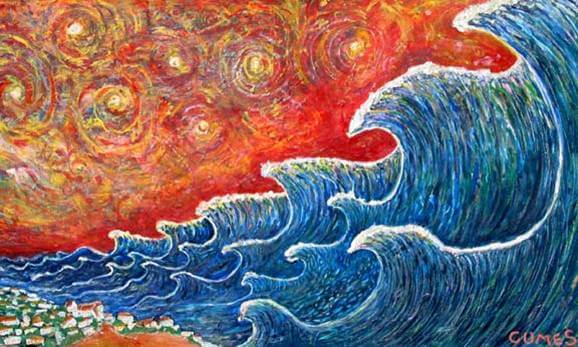 As a species, we humans are experiencing growing pains. Our technology is exponentiating and we’ve become totally dependent on it. Technology is extending the human lifespan and growing food where none used to grow. It has brought a handful of humans into space, as far as the moon. Soon, some of us will probably travel a lot further. By viewing the Earth from afar we’ll come to understand that the cultural, political and economic differences that divide nations are small compared with the similarities that tie humans together.

But many people are concerned that we’re moving too far from Nature, although what people mean by that word often differs.By losing touch with nature, many people say, we’re taking the sustainability of our environment for granted; we continue to destroy it by burning fossil fuels. On top of that, in the last 75 years, we’ve created a massive stockpile of nuclear weapons that can wipe out our species in a few hours.

The problem is that nature is not very benign, and simply letting nature run its course would drive us to extinction just as surely as a nuclear war. Without technology–not just our current technology, but major advances–we’ll be lucky if we last even 1 percent as long as the dinosaurs did. Yes, technology causes many problems, such as climate change, and yes we’ve been irresponsible to the very environment that keeps us alive. But technology can and has also fixed many of the problems that we’ve caused, greatly enhance life, and also protect us from potential natural disasters that pose an existential threats to our species and that will occur eventually, not necessarily because of anything that we’ve done.

Dependent on technology and yet scared of it

In his 1996 book, The Demon-Haunted World: Science as a Candle in the Dark, the late astronomer and science popularizer Carl Sagan penned one of the most insightful observations about science and technology in modern times:

We’ve arranged a global civilization in which most crucial elements profoundly depend on science and technology. We have also arranged things so that almost no one understands science and technology. This is a prescription for disaster. We might get away with it for a while, but sooner or later this combustible mixture of ignorance and power is going to blow up in our faces.

Recently, a Pew poll comparing the views of scientists affiliated with the American Association for the Advancement of Science and the general public underscored that Sagan’s warning applies to numerous specific issues. The public is out of tune with scientists on major issues with direct policy implications, such as climate change (most scientists agree that humans are causing global warming but large segments of the general public doubt it), nuclear power (most scientists think that it’s safe, certainly safer than continuing to 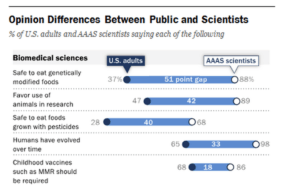 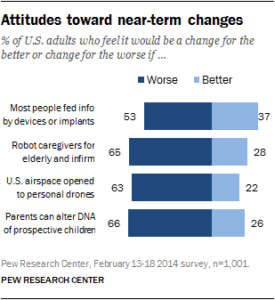 These findings reinforced another PEW study, released in 2014, suggesting that Americans–arguably the most technologically savvy population on Earth–are divided and often ambivalent over the role technology will play in our future.

Some 59 percent are optimistic that coming technological and scientific changes will make life in the future better, while 30 percent think these changes will lead to a future in which people are worse off than they are today.

Many of the concerns have to do with genetics and the altering of life and human functioning. For example, 66 percent think it would be a change for the worse if prospective parents could alter the DNA of their children to produce smarter, healthier, or 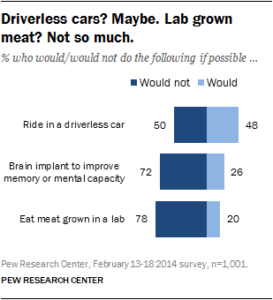 more athletic offspring. Seventy-eight percent think lab grown meat is a bad idea. Another 53 percent (with the percentage of women far higher)
think it would be a change for the worse if most people wear implants or other devices that constantly show them information about the world around them. One quarter of Americans (26%) say they would get a brain implant to improve their memory or mental capacity if it were possible to do so, while 72% would not.

All of this raises a question: namely are humans scared of the very science that has brought them to this point? Or, is there any merit to the proposition that we’ve strayed too far from nature? Clearly, most people are ambivalent about just how much humans should intervene in nature. The real question is: if we hope to survive as a civilization do we have a choice?

The dinosaurs were wiped out by an impact from an asteroid or comet, or a few such impact events, but prior to that they had existed (as a multitude of species) for about 165 million years. That’s a pretty good run, especially if we consider that modern humans have been around only for a mere 200,000 years of so. There’s no guarantee that we’ll last even close to as long as the dinosaurs did. Using the history of life on Earth as a guide, it seems likely that nature will destroy us as it did the dinosaurs.

Unless, we learn to take control of it.

We do have to protect our environment, just as we have to continue reducing the number of nuclear weapons and prevent proliferation. But doing those things actually requires technology–major technology. Since a peak during the Cold War, the US and Russia have dismantled tens of thousands of nuclear weapons, reducing the number of deployed strategic warheads from nearly 70,000 down to just under 3,200 (as of March 2015) combined for the two nuclear superpowers (with another 600-910 nuclear warheads deployed by other nations). The number continues to drop toward more manageable levels, but the ability to continue the reduction–and arrange similar treaties with other nuclear and developing nuclear nations–depends intricately on sophisticated monitoring technology, both on Earth and from space.

To stop global warming, stopping the burning of fossil fuels may not be enough. We may need a high-tech solution involving chemicals to pull greenhouse gases out of the atmosphere, or systems in space to block sunlight. To stop using fossil fuels, we’ll probably have to expand civil nuclear fission power for a few decades, until we have something better, like nuclear fusion. Solar and wind are wonderful, but they won’t be enough to fill the power grid unless we pursue them at a VERY high-tech level. For instance, we could power the entire Earth from solar power stations constructed on the surface of the moon, or place wind power stations high in the atmosphere on blimps. But the cost for those innovations may be out of reach technically and financially for decades or more.

In addition to human-induced climate change and nuclear weapons, there are many other dangers to our civilization and species. They’re not our fault but part of the environment in which we evolved. Within the Earth, there are techtonic forces that cause earthquakes, and from time to time there are massive volcanic eruptions. Just one huge eruption can release enough dust and chemicals into the atmosphere to put the planet into a severe ice age and set off events that destroy the food chain. So far, we’ve been very lucky, but to assure our survival we’ll need to control earthquakes and volcanic activity, and as long as we’re doing that it will help if we also learn to tap into the energies that cause both phenomena. On what scientists and futurists call the Kardashev Scale, such abilities would turn us into a Type I civilization–a species with enough science and technology to harness and manage energy on a planetary magnitude.

Danger also can come from space as it did for the dinosaurs. We’ll need asteroid deflection systems, and, finally, for ultimate species preservation, we’ll have to be living on multiple planets. Along with harnessing and controlling earthquakes and volcanic activity, the ability to protect one’s world from asteroid and cometary impacts and to colonize other worlds within one’s star system are hallmarks of a Kardashev Type 1 civilization.

From the standpoint of evolutionary and geologic history, if all we do is try to return to nature, put up solar panels, and sing Kumbaya in the woods, we’ll be extinct fairly quickly. We must not fear technology; we have to embrace it, and use it in creative, forward thinking ways. That’s how we can evolve into a Type 1 civilization and stay around for a really long time.