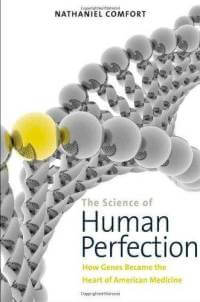 Eugenics is back into the headlines, thanks to rapid advances in personal genomics. Naturally, not everyone is inclined to greet a new eugenics with open arms; the slippery slope Gattaca argument lives on. But the new eugenics frames itself as an issue of choice: if it’s possible for a parent to choose to have a child free of genetic disease, or of a certain gender, is it moral to deny that choice? Dramatic developments in medical genetics, including the ability to tinker with our genetic inheritance, has thrust the issue of eugenics back into the headlines. The latest person to take up the cause of this once-discredited movement is Nathaniel Comfort, professor at the Institute of the History of Medicine at The Johns Hopkins University, whose book, The Science of Human Perfection: How Genes Became the Heart of American Medicine, was recently published.

“The eugenic impulse drives us to eliminate disease, to live longer and healthier, with greater intelligence and a better adjustment to the conditions of society,” he argues in a thought-provoking summary of the arguments in his book in The Chronicle of Higher Education. He claims, provocatively, that eugenics is an irrevocable impulse to improve our selves, and this impulse is playing out in new ways now that society has access to an expanding set of genetic tools.

These are controversial grounds to re-plow.  Although often portrayed as offensive by today’s standards, classical eugenics—which means “good genes”—has its roots in the progressive era at the turn of the twentieth century. Social Darwinists propagated the belief that social progress could only be attained by phasing out “undesirable genes.” The scientists who formulated these ideas were, by and large, very much mainstream, and their speculation sounded reasonable to an establishment convinced that it was threatened by an “invasion” of immigrants from Southeastern Europe. 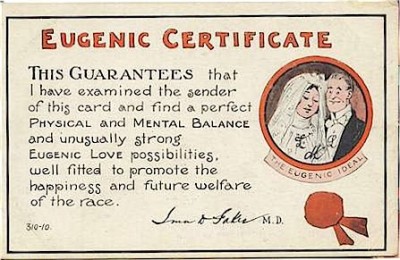 Scientists offered what they considered to be a progressive solution: “positive eugenics,” which would encourage society’s healthiest citizens to have more children—the founder of Planned Parenthood, Margaret Sanger, was an eager proponent of eugenics—and more tentatively, “negative eugenics.” The “negative” wing of eugenics prevailed, however, which for the most part meant restricting the mentally ill, poor, immigrants and non-whites from propagating. It served as an inspiration and justification for Nazism and the “Final Solution,” which led to the discrediting of the entire movement.

Now, eugenics is back in vogue with a clear focus on the positive role that genetics can and is playing in medicine and health. As Comfort argues:

“The eugenic impulse drives us to eliminate disease, to live longer and healthier, with greater intelligence and a better adjustment to the conditions of society. It arises whenever the humanitarian desire for happiness and social betterment combines with an emphasis on heredity as the essence of human nature. It is the aim of control, the denial of fatalism, the rejection of chance. The dream of engineering ourselves, of reducing suffering now and forever.”

We are in the “second age of eugenics” as Discover blogger Razib Khan notes. For example, we regularly abort fetuses that test positive for Down syndrome. And because of advances in genetic screening, we are in a position to reduce the frequency of many Mendelian diseases with large effect and high penetration. Genetics companies have sprung up to circumvent some of the ethical concerns by, for example, helping to identify mutation carriers before conception so potentially diseased embryos can be identified in pre-implantation procedures. 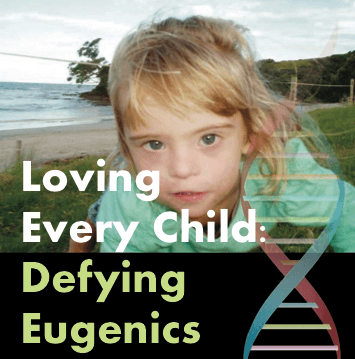 These potentially invasive aspects of modern genetics have put both the far left and right on edge. They share what amounts to a religious-like belief that nature and life should be considered inalterable. Pro-life groups and activist groups on the left that argue for the dignity of people with disabilities often campaign vigorously against aborting fetuses known to carry debilitating diseases.

Their case is taken up by activist writer Alex Knapp at Forbes who holds that no one is “eugenically unfit” and society has advanced too far scientifically and morally to allow such practices. He focuses solely on negative eugenics and not the positive impact that family planning and genetic screening have already had on society.

The Center for Genetics and Society, which considers itself a progressive advocacy group, conflates gene therapy with eugenics, arguing that it is socially and ethically reprehensible to alter the genes that we pass on to our children. It’s an odd and somewhat simplistic argument since CGS supports planned parenting which attempts to achieve the same goal, but with far less precision and with the certainty of more unintended consequences. Perhaps CGS is fearful of advanced technology when harnessed for the individual and public good.

Scientist and blogger Gerhard Adams, writing at Science 2.0, raises more sophisticated concerns about the potential for germline manipulation. The eugenics concept itself is flawed, he maintains, because there is no way to determine whether what appears to be a negative trait may also contain benefits, much like the sickle cell trait protects people from contracting malaria. Eliminating the trait could have mixed and potentially dicey consequences.

“Some may argue that we have plenty of evidence from our experiences in animal domestication,” he writes, “yet who would claim that these results are an improvement of the original species?  The modifications have made these animals more compliant with human demands, but improved the original species?” He continues that, if given a choice, humans will converge toward genetic homogeneity, which is also bad for the species.

One key problem with Adams’s line of reasoning is that eugenic abortions would not necessarily remove the trait. Eugenics-inspired screening in the Jewish community has but ended Tay Sachs among Orthodox Jews, but the frequency of the allele has not changed. Down syndrome is a spontaneous, and not an inherited trait, so screening and abortions would not impact the germline.

Moreover, modern eugenics aspirations aren’t about top-down measures promoted by the Nazis or the forced sterilizations of the past, as Comfort points out. Instead of being driven by a desire to improve the species, new eugenics is being driven largely by the individual’s personal desire to be as healthy, intelligent and attractive as possible—and for our children to be so. 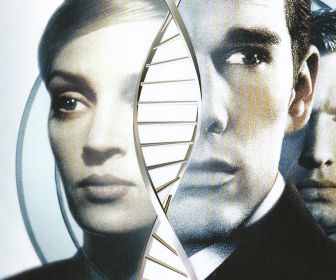 The main concern is the slippery slope Gattaca argument—that as more people adopt genetic screening, those choices could become less voluntary, or at least hard to turn down. Science 2.0 founder and editor Hank Campbell argues that once it becomes possible to engineer “superior” qualities in human beings, then a parent’s only moral choice will be to have genetically “improved” children.

That may sounds like a real argument but it’s sci-fi in the extreme, and far more “fi” than “sci”. Knapp, CGS and Campbell may appear to be warning against Big Brother but their response to advances in genetic screening would lead to Big Brother-like restrictions. Isn’t this just another iteration of the anti-abortionist (and far left) belief that life is “sacred” and “inviolable”?

Should we limit personal choice in genetic enhancement? In a post about prenatal sex selection and reproductive rights, science blogger Cameron English strikes a sensible balance. “There’s no doubt that we need to consider the difficult ethical questions that arise as our ability to manipulate nature improves,” he writes. “But making ominous predictions and restricting personal choice shouldn’t be a part of that discussion, at least not without evidence.”

Sarah Fecht is a writer and editor at the Genetic Literacy Project.

Jon Entine is executive director of the Genetic Literacy Project and senior fellow at the Center for Health & Risk Communication at George Mason University.