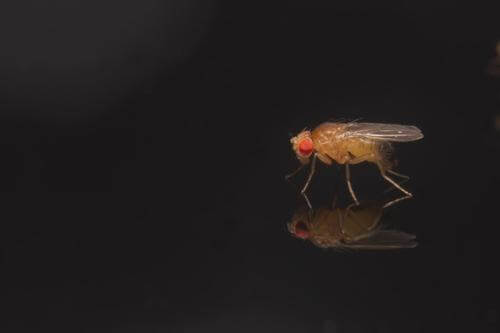 A new study has found that female fruit flies don’t simply choose a mate based on things like wing colors. They look for intangibles, like the hidden colors of wings invisible in normal light.

Hidden from normal view, males have extremely thin wings that are transparent and colorless – except they shimmer with beautiful colors thanks to a refraction phenomenon known as thin-film interference.

Lund University researchers have now studied the significance of these interference colors on the wings of fruit flies and whether the colors influence choice of partner, i.e. to what extent females use these colors to select a mate. The results show that the colors are important.

“Our experiment shows that this newly-discovered trait is important in female choice in fruit flies, and is the first evidence that wing interference patterns have a biological signalling function between the sexes during sexual selection,” said Jessica Abbott, a biologist at Lund University. “Because the wings are transparent, these colors are only visible against a dark background.”

Wing interference colours are determined by the thickness of the wing. The colours are only found in small insects, particularly flies and wasps, which have wings that are only nanometres thick, i.e. not much thicker than a millionth of a millimeter. Fruit flies have been used as laboratory animals in genetics research for almost 100 years and intensive studies have been carried out on sexual selection in the species, yet despite this the characteristics used in mate choice have remained uncertain.

This image depicts the the WIP on a fly wing. Credit: Natsu Katayama

“Our results will hopefully stimulate more research on wing interference patterns in other species, and increase interest in the role that the light environment plays in mate choice”, said Professor Erik Svensson from Lund University.