Do you buy ‘gluten free’ products? Real chance they have gluten in it

Clearly an incredible amount of ‘gluten free’ is a marketing move, considering that fewer than one in 200 people in the United States (0.5 percent) suffer from celiac disease (more here). Furthermore, rigorous research that has been conducted more recently suggests that non-celiac gluten sensitivity may not even exist.

Test participants had their diets controlled, measured, and then they reported their opinions of digestive symptoms and the results led the study author (gastroenterology professor Peter Gibson) to conclude that, in individuals who claimed to be non-celiac gluten sensitive, “We could find absolutely no specific response to gluten.”

For those with celiac disease, however, being able to avoid gluten is clearly beneficial. To assist in this, the term “gluten free” is now regulated such that a product labeled accordingly must contain less than 20 parts-per-million (< 20 ppm) gluten; What does this translate to? Well for about an ounce (30 gram) serving size, 600 micrograms (0.60 milligrams) would be permitted, according to the regulatory guidance. The moniker ‘natural’ is exhaustingly more vague, and has no regulation behind it (more here). But because ‘gluten free’ is regulated, it needs to be maintained at a level that is required by the FDA. 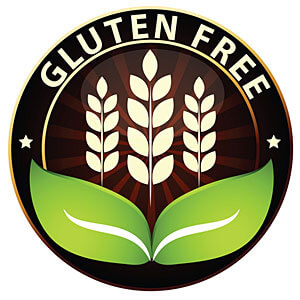 According to FDA research published in the journal Food Chemistry, if you bought 100 products labeled ‘Gluten Free,’ 1 of them (1.1 percent) would in fact not meet the claim.

contain wheat, rye, or barley (gluten sources), 19 of them (19.4 percent) would actually exceed the 20 ppm threshold for gluten, and more than half of those (about 10) would exceed 100 ppm! Straightforward arithmetic shows us that this is still only about 3 milligrams of gluten per 30 gram serving (and for a sense of perspective, there are 5,000 milligrams of mass in 1 teaspoon of water) – this (3 milligrams) therefore is about 1/1,700th of a teaspoon.

Interestingly, foods in the second group (i.e., not labeled ‘gluten free’ but not containing gluten sources such as rye/wheat/barley) were more likely to contain gluten if there were oats in the ingredients, suggesting that oats are an introductory vector for gluten, likely due to cross-contamination during processing.

Having a sense of perspective, as I’ve shown above, is important. But at the same time, science can help us to make better decisions – and for those who need particular food choices (for example: for control of diabetes, celiac disease, coronary artery disease, etc.) we need reliable labeling and consistent reliable processing. Even the 1 percent level of error discussed above (of products labeled ‘gluten free’ but containing > 20 ppm gluten) is too high; This is 10 products which fail the regulatory guidance per 1,000 sold – and a single typical mid-sized grocery store sells tens-of-thousands of products labeled ‘gluten free’ every day.

Ben Locwin, PhD, MSc, MBA is a Contributor to the Genetic Literacy Project and is an author of a wide variety of scientific articles for books and magazines. He is also a researcher and consultant for a variety of industries including behavioral and psychological, food and nutrition, pharmaceutical, and academic. Follow him at @BenLocwin