Intelligence Squared, an organization that organizes public debates across the globe, holds them in traditional Oxford debating style which pits one team against another in swaying a voting audience for or against the motion in question.

The winner was decided through votes held before and after the debate, online and at the hall where the debate was held. Garnering a 28 percentage point increase in support, the ‘for’ speakers gained the victory on the night 60 – 31 percent. 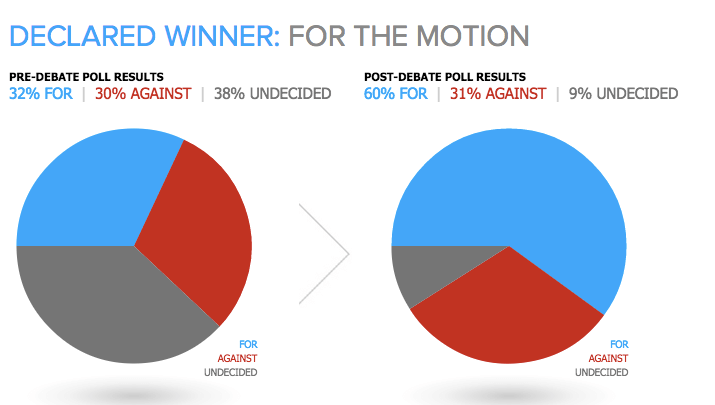 In the opening round of the debate, the ‘for’ scientists–Robert Fraley, vice president of Monsanto, and Alison Van Eenennaam of the University of California, Davis–hung their argument on the safety and environmental record of current GE crops and their documented benefits, as well as the potential they hold for feeding a growing population with less environmental impact.

First to speak Fraley, argued that during the 1990s adoption of insect resistant crops saw a “dramatic reduction in insecticide use and an increase in crop yields” while herbicide tolerant crops had a beneficial impact by “enabling farmers to use safer and more environmentally friendly chemicals” and reducing greenhouse gas emissions.

Van Eenennaam made the case that many current publicly funded applications of the technology are “compatible with agroecology, sustainability,and feeding more people better with less environmental impact.”

“GM is sometimes uniquely able to deliver a useful trait, like crops that are more resilient to climate change,” said Van Eenennaam,

Speaking against the motion–Charles Benbrook of Washington State University and Margaret Mellon, formerly of the Union of Concerned Scientists–played down the importance of genetic engineering in feeding a growing population without further damaging the environment. Questioning how successful the technology has been at living up to its early promises, they argued that any initial benefits have withered, and that continued investment in developing new GE varieties distracts attention from other, more promising agricultural tools.

“I’ve read essentially all of the statements by various bodies,” said Benbrook. “Most of the recommendations for better science, more careful risk assessment, and post-market surveillance that have been made for more than 15 years, in these reports, have not been acted upon.”

Mellon said that how the efficacy of herbicide resistant crops has fallen as resistant weeds have developed. She described how early falls in herbicide use are being offset by recent increases and that there is “nothing ahead of us except skyrocketing use, not only of glyphosate, which is the major herbicide in Roundup, but of other herbicides… herbicides we thought we’d never have to use much of again.”

Fraley, a 2013 World Food Prize Laureate, responded by noting that weed resistance develops to all herbicides eventually, which is not a reason to abandon using herbicides and is not unique to GMO crops. “You’ve all heard of antibiotic resistance, so what should drug companies do? Should they not develop new antibiotics simply because there’s resistance to an antibiotic?” he said.

Both Mellon and Benbrook focused much of their ire on the use of glyphosate, which they suggested could pose dangers to humans, which the research by mainstream scientists does not support. It was also pointed out that both scientists had previously heaped praise on glyphosate because it profiles as a very mild herbicide compared to the chemicals it has replaced, and is less toxic than many organic herbicides.

Benbrook also focused on existing crops, asking of Bt corn “what the impacts of the Bt proteins that are all throughout that plant are on the environment, on aquatic ecosystems, on the cost to farmers.”

Following the opening statements the chair pressed both sides on the safety issue. Mellon argued that despite the safety record on acute health effects there was a dearth of evidence on subtler, long term effects. Benbrook suggested the safety of stacking traits – introducing several desirable genes into a single crop – has not been adequately assessed.

Benbrook denied that there exists a scientific consensus on the safety of GMO crops, although he did not site any independent organization that has challenged the benign views expressed by the National Academy of Sciences, World Health Organization and the American Academy for the Advancement of Sciences, among dozens of global organizations.

Both speakers for the motion defended the robustness of the safety literature. Van Eenannaam cautioned against making blanket assertions about safety, but also explained the implausibility of the hypothesis that stacked traits would introduce new concerns.

Another seam running through the evening’s discussion was the environmental impacts of GE crops, with a particular focus on the use of glyphosate. Responding to an audience question from Bill Nye about the appropriate amount of time needed to assess ecological effects of GE crops, Mellon pointed out that the decline of monarch butterflies showed that effects could be felt within decades. Van Eenannaam responded by pointing out that was conflating the technology with other issues, namely weed control, as there GM crops have no direct impact on butterflies or other insects.

Addressing the issue of whether GE crops be instrumental in feeding a growing population, the ‘against’ speakers highlighted trade problems stemming from the patchy adoption of GE foods across the globe. Fraley downplayed this point as “really minor against the context of the benefits that these products have provided for food security.”

Common ground was almost reached on the necessary use of non-GE technology in answering food security challenges, but Van Eenannaam warned over framing the issue as a choice between mutually exclusive approaches.

Both sides also agreed there was too much attention on genetic engineering, but for separate reasons. Those against the motion argued that the technology’s record does not justify further investment, and that nothing lies ahead except a chemical arms race with resistant weeds. Those for the motion argued the scaremongering over hypothetical risks has skewed the debate and stifled development of beneficial products.