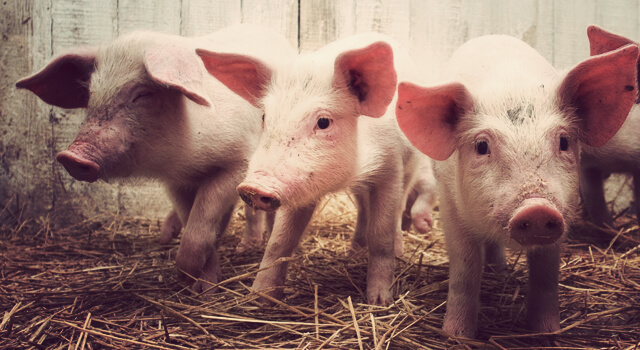 Two years ago, Judy Carman, an adjunct associate professor at Australia’s Flinders University School of the Environment and a dedicated campaigner against genetically modified foods, published a paper claiming that she had discovered the anti-GMO silver bullet: an explanation of how GM foods could wreak havoc on human digestive systems. Carman claimed that genetically engineered corn and soybean feed was causing undue inflammation in pig intestinal tracts. Activists who had supported the long-discredited Seralini study on tumors in rats turned to Carman’s work, promoting is as proof that humans face similar health threats. 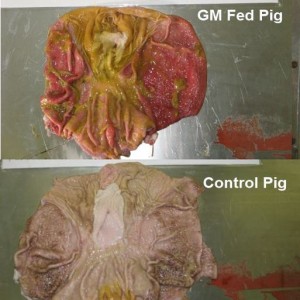 Despite the celebration of Carman’s pig research by anti-GMO advocacy groups, her studies have been discredited by the mainstream science research community. No clear definition of “severe,” “mild” or any other kind of inflammation was presented—Carman’s characterizations were purely subjective and based on visual evidence, which is often not indicative of actual inflammation. 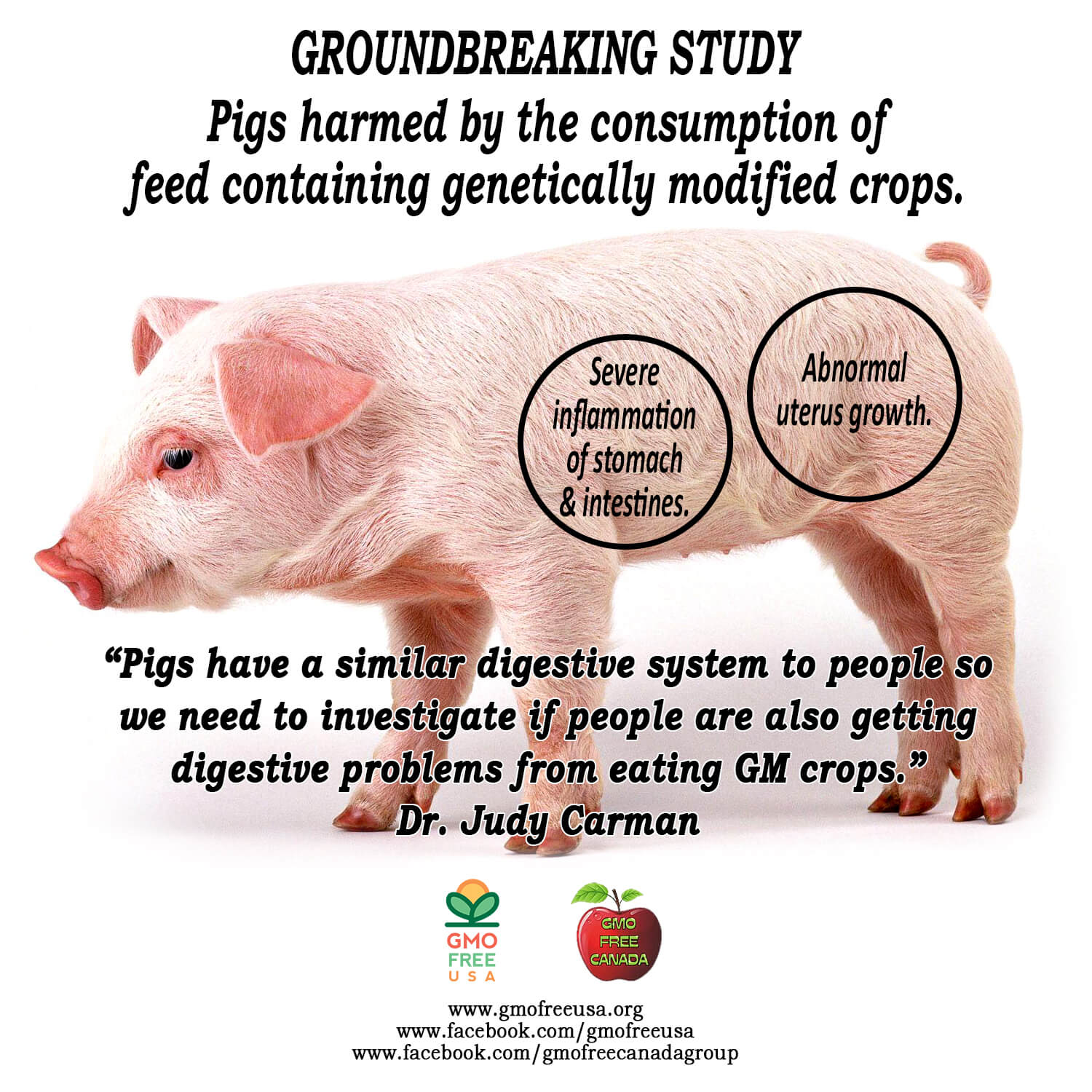 Without an empirical standard for what constitutes inflammation, one could easily show the same data to demonstrate no discernable effects of genetically modified pig feed.

Read GLP Facts report on Judy Carman and her research

In addition, application of proper statistical tests showed no significant differences between pigs fed genetically modified corn or soybeans, and the control pigs. The publishing journal itself was suspect; it is not an independent source but ‘pay for play’ and funded by the organic food industry. The entire enterprise, wrote numerous scientists including American surgical oncological David Gorski and Australian geneticist David Tribe, appeared to be a “fishing expedition,” listing dozens of parameters without tying them to exactly what was eaten nor to whether what they were seeing was due to disease, or just chance.

Scientists also note that there is absolutely no field evidence corroborating Carman’s claims. Writing last year in the Journal of Animal Science, in the most comprehensive study of GMOs and food ever conducted, University of California-Davis Department of Animal Science geneticist Alison Van Eenennaam and research assistant Amy E. Young reviewed 29 years of livestock productivity and health data from both before and after the introduction of genetically engineered animal feed.

What did they find? That GM feed is safe and nutritionally equivalent to non-GMO feed. There was no indication of any unusual trends in the health of animals over 18 years since 1996 when GMO crops were first harvested. Considering the size of the dataset, it can reasonably be said that the debate over the impact of GE feed on animal health is closed: there is zero extraordinary impact.

Three months ago, in December 2015, Carman published a review piece in Environment International that is again being heavily promoted by critics of genetically modified foods. It contains no original research. Rather, it is comments on other research papers focused on health effects of genetically engineered feed. While not heralding it as strongly as her and Seralini’s previously published and discredited work, activists have begun leveraging it to boost the message that “GMOs aren’t safe in the long term.”

Carman and her colleagues reviewed 21 long-term whole-food feeding studies that included histopathological analysis of rat digestive tracts. Looking a studies on EPSPS gene herbicide tolerance, and insect resistance due to recombinant cry1Ab or cry3Bb genes, the team claimed that out of 47 crops approved for humans or animals, only nine had conducted such studies. Therefore, she maintained, 81 percent of approved genetically modified foods had no studies that supported their safety in animals.

Not quite, respond a number of researchers. First, the review looked only at histopathology studies that examined digestive tracts, just like her study of pigs and her disputed findings of inflammation.

Second, she and her team ignored all other studies, such as histology, analytical chemistry and other modern toxicology methods that have proven much more effective at predicting pathology than looking at intestinal tissue, which is difficult to interpret.

Carman’s study review strategy amounts to a “fishing expedition” in which “each trait is marked, looking for hundreds of histological endpoints,” according to Christopher Preston, Associate Professor of Weed Management at the University of Adelaide, South Australia.

“Most of these endpoints vary substantially with changes in diet and large amounts of a specific food would need to be in the diet to attempt to identify an effect,” he said. And then, once you find an “effect,” whether it be inflammation, a small tumor, or variation in organ size, you need to determine whether or not this finding is important.

Which leads us to statistical problems. An additional issue with “whole food” analysis of feeding animals is that you need an awful lot of animals. And the more “endpoints” or traits you’re looking for, the more animals you’ll need. None of these studies cited by activists—including Carman’s pig gut study—included enough animals to make any statistically significant conclusions

Carman’s analyses have been dismissed by regulatory authorities around the world. The Food Standards of Australia and New Zealand, as well as the United States Department of Agriculture, have not only not called for such whole food studies, they also state that other modern toxicological techniques are more effective, if not more so. The European Union does require “whole food studies”, but only on single-trait GM crops; importantly, the EU also calls for minimizing animal use. Carman’s studies have raised serious ethical concerns, as their study and similar investigations have resulted in the sacrificing of hundreds, if not thousands of laboratory animals to get results obtainable by other more humane means.

So, what will be the impact of Carman’s latest review on the GMO debate? A few activists worldwide are starting to ask for “whole food” studies, claiming that studies, as Carman’s paper states, “do not simply consider GM food as being composed of several substances of known safety, but as a novel entity, the safety of which needs to be evaluated as a whole.”

It’s important, and ironic, to note that none of the studies cited in the Carman paper documented any health or safety problems tied to GM food. However, Preston and others warn that activists are already trying to circumvent the overwhelming scientific consensus on animal and human safety by attempting “a bit of goal post moving.” Tests on the genetically modified protein have so far shown no effects. To sidestep that reality, activists are switching tactics and trying to reframe the safety debate by calling for whole-food feeding studies.

Under this new paradigm, GMOs will henceforth be considered as completely new entities (most testing actually compares GMOs to traditionally grown food, because the only difference is the modified section). When “long-term” 90-day studies also showed no harm, activists demanded ever longer studies even though scientists say studies longer than 90 days yield no more useful data. (There have been numerous studies on GMOs longer than 90 days, but only the discredited Seralini research has hinted at any unusual health problems).

Is it likely that genetic modification can produce latent affects after lingering in the body for years? If it does, it will be proper scientific experiments that expose it. So far, moving the goalposts further and further away hasn’t revealed any such evidence.