Pew survey: 80% of churchgoers, including most Republicans, support masks and social distancing during services

U.S. adults overwhelmingly say houses of worship should be required to follow the same rules about social distancing and large gatherings as other organizations or businesses in their local area. About eight-in-ten Americans (79%) take this position, four times the share who think houses of worship should be allowed more flexibility than other kinds of establishments when it comes to rules about social distancing (19%).

On this question, Americans seem to align with two recent Supreme Court orders, which rejected lawsuits claiming that state restrictions on worship violated the First Amendment’s guarantee of religious freedom. At the same time, many state and local governments have carved out exemptions for religious institutions from pandemic-related restrictions.

Among U.S. Christians, about three-quarters say churches should be subject to the same rules as other businesses. Evangelical Protestants express the most support for giving houses of worship more flexibility, but even in this group, a 62% majority says houses of worship should be held to the same standards as other businesses and organizations (see Chapter 1 for more details). And while Democrats and those who lean toward the Democratic Party are substantially more likely than Republicans and Republican leaners to say houses of worship should be required to follow the same social distancing rules as other organizations, a two-thirds majority of Republicans also express this view. 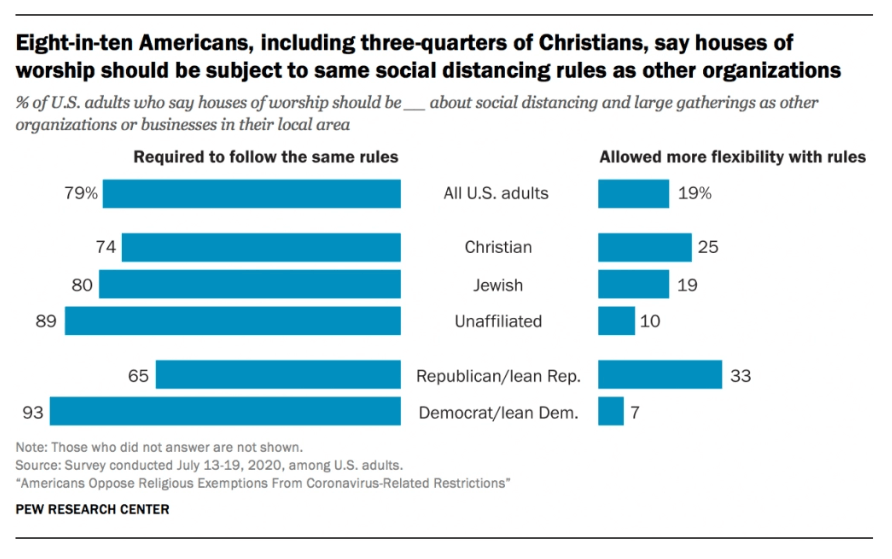