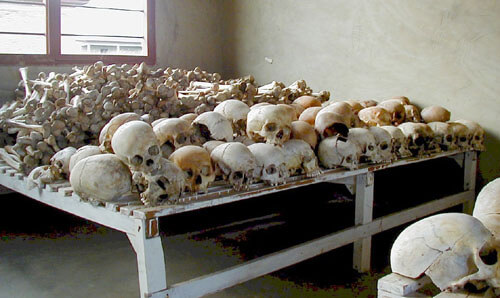 Despite the large number of publications in the media and academic circles about this catastrophe, the origins of this deep ethnic tension between the Hutu and Tutsi are still not quite clear and remain largely controversial.

Journalists have generally blamed European colonial policies for initiating and perpetuating the conflict. According to the narrative shaped by the media, the conflict revolved around what was characterized as the European’s divide and conquer tactics, playing one group of Rwandans against the other.

Although it is true that colonial politics and competition for power played a direct role in initiating the, there appears to be a much older legacy of repulsion between the two groups. To fully understand the conflict we must explore the history and origins of the two groups.

Many researchers have traced the origins of the conflict to pre-colonial Rwanda. While the Hutu are known to be a Bantu population from central and southern Africa, understanding the precise background of the Tutsi poses a challenge to scholars. One popular theory, derived from Rwandan folklore and a diversity of research efforts, traces the origin of the Tutsi to the Horn of Africa, and more specifically to what is today Ethiopia. According to this theory, migrating populations from the Horn of Africa somehow occupied Rwanda and formed a monarchy around the sixteenth century. A hierarchical social system is thought to have evolved. The Ganwa, the elite ruling class, were at the top; below them were the Tutsi cattle herders; and they were followed by the majority of the population, Hutu farmers. Under this theory, both the Ganwa and Tutsi eventually adopted the local language and were assimilated into the mainstream culture and religion of the Rwanda region. Over time, the Ganwa were essentially absorbed by the Tutsi; thus the Tutsi became the most powerful group in the monarchy.

When the Belgians arrived in Rwanda in the early twentieth century, they allowed the Tutsi to continue their leadership under colonial supervision. The Tutsi were, accordingly, granted better opportunities than the Hutu, which would have exacerbated tension between the two groups. Moreover, the colonial system allowed the Tutsi easier access to education and placed them in superior administrative positions.

Later in their rule, the Belgians came to redefine the boundaries between the two groups by economic status, more so than by ethnicity. In the early 1930s, for example, the Belgians in Burundi classified an owner with ten or more cows as Tutsi and a poor citizen as Hutu regardless of ethnic identity. Another colonial policy, of similar effect, involved the introduction of an ID card that allowed a citizen to change ethnic identity, either to Hutu or Tutsi, though a certain fee was required.

The degree as to which the Hutu and Tutsi are two different ethnic or genetic population groups remains the subject of debate among scholars today. There is no clear-cut distinction in the physical features between the two. Even for Rwandans, during the genocide, some Tutsi survived because they were mistaken for Hutu, while some Hutu mistaken for Tutsi were killed.

Several popular media accounts, including the 2004 movie Hotel Rwanda, suggested that the concept of distinction in physical features between the two groups was formulated by colonial ideologists, and thus has no basis in reality. Critics deemed this analysis as naive and simplistic.

A number of scholars have nonetheless indicated that the Tutsi do in fact display distinguishable physical traits. In his widely acclaimed work, Rwanda and Burundi, Rene Lemarchand stated that the Tutsi’s “physical features suggest obvious ethnic affinities with the Galla tribes of southern Ethiopia.” Anthropologists have also hypothesized that the Tutsi originated out of the Falasha, the Ethiopian Jewish population.

Anthropologist Jean Hiernaux, based on studies of blood factors and archeology, has challenged the Ethiopian origin theory, arguing that the Tutsi’s distinguishable physical traits can be found in ancient fossils far south in Eastern Africa. He suggested that such physical features are probably the result of phenotypes found elsewhere in the eastern part of sub-Saharan Africa. Razib Khan argued in his highly regarded Discover blog that a relative genetic difference suggests that the group is likely to have descended from a Nilotic population from the Nile region of Africa.

Genetic studies suggest that the Hutu and Tutsi of today are hardly distinguishable (see Leon Rosenberg and Diane Rosenberg, Human Genes and Genomes, p 7). Yet the question as to whether a difference still exists or not remains controversial. As Jon Entine writes in Abraham’s Children, despite the enthusiasm that comes with investigating our genetic heritage there is always the risk of granting too much explanatory power to genetics. Ethnic identity involves more than genetics—namely religion, culture and social and political associations.

The renewed discussion of the Rwandan case has undermined the Euro-centric belief that African history, particularly of the sub-Sahara, basically started with and was wholly shaped by European colonialism. Economic, socio-cultural, and ethnic struggles throughout Africa are, in most cases, much older and have far deeper roots than the European colonization period.

Of course this is not to underestimate the role that colonial authorities played in contributing to ethnic tensions in Rwanda. For instance, in 1959 Belgian authorities supported the Hutu against the insubordinate Tutsi leadership leading to a violent rebellion where hundreds of Tutsi were massacred.

Recent international interventions in the local structure of Rwanda have had extraordinary impacts on all levels. Thanks in large part to the media, the Internet and telecommunication technology, the now-global concepts of coexistence, individual freedoms and equality are increasingly shaping the new character of Rwandan society.