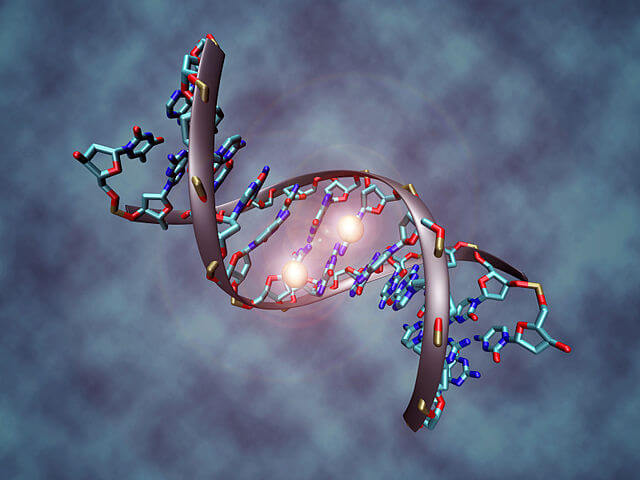 What does noncoding DNA—ncDNA—do? That’s the DNA formerly known as junk; the DNA in every cell that is not organized into the classical genes that make proteins.

The question arises because of a recent piece by Sam Kean in Slate. The article explored some implications of a genome project on a carnivorous plant known as the humped bladderwort (aka Utricularia gibba.) U. gibba is a big deal because it has a tiny genome.

This plant has about 28,500 genes, an amount of protein-coding DNA typical for a plant. But only 3 percent of its DNA is noncoding. That’s an uncommonly low percentage. The amount of ncDNA in a plant is nearly always much larger, ranging from 10 percent to 60 percent of the genome of a species across most of the plant kingdom.

The humped bladderwort lives a successful weed’s life all over the world. It can even flourish in a teacup. It is in no way handicapped by its tiny genome. Which suggests that it’s perfectly possible to get along fine with very little ncDNA.

What is noncoding DNA for?

A question Kean’s piece did not take up is this puzzler: If lots of ncDNA is not necessary to a prosperous life, why are most organisms just stuffed with ncDNA? Take, for example, our own species. Only 2 percent or so of the human genome is genes. The other 98 percent is ncDNA. What, if anything, is it up to? Or is it junk after all?

One answer to that question was published in September of last year. The ENCODE project catalogued all ncDNA in the human genome, collating it into a huge publicly accessible database. This was very big Big Science, resulting in more than 30 papers with hundreds of authors. But what made headlines–and infuriated many scientists—was ENCODE’s claim that 80 percent of human ncDNA was functional. Was doing something.

I won’t recap the ENCODE brouhaha other than to point out that there was one. I wrote two posts about it at the time; you can read the first one (“Junk”) here and the second one (“Junk Too”) here. They are both full of links if you want to delve more.

Despite the ENCODE public relations offensive, which was indeed offensive to many, it is completely clear that most human ncDNA (and therefore the majority of all human DNA) isn’t contributing materially to your life or mine. So I asked for help in understanding ncDNA from Sean Eddy, who does computational biology at the Howard Hughes Medical Institute’s Janelia Farm, and Michael Eisen, another HHMI star, who does computational and experimental genomics at Berkeley.

The ncDNA story is mostly about transposons. Occupying fully half the human genome, transposons are stretches of DNA that can hop around in host DNA. They are somewhat related to viruses. Eddy calls transposons “molecular parasites.” We do delete them, but they replicate so fast that we can’t keep up. “Transposon load –the extent to which a genome is currently infested with them—varies from genome to genome, and largely explains the otherwise puzzling variation in content of ‘nonfunctional’ DNA,” he told me in an email.

Without having read the bladderwort paper, Eddy was willing to bet that U. gibba has almost no transposon-derived DNA and almost no active transposons. He was, of course, quite correct. U. gibba has fewer than 400 transposons, although they dominate its small amount of ncDNA, accounting for 2.5 percent of its genome. It also has genes that silence transposons.

Most junk DNA (oops, sorry, ncDNA) is composed of dead and decaying transposon-derived sequences. Some, however, does have an impact on its host. Sometimes when a transposon jumps around, it jumps into the middle of a gene and disrupts its work.

Transposons affect transcription. They can act as enhancers or promoters. This being Nobel Prize time, Eddy reminded me that Barbara McClintock got her Nobel Prize in 1983 because she discovered transposons. She worked with maize, finding that the mobile elements inserted themselves into pigment genes and altered the color of corn kernels. Think about McClintock’s transposon Nobel Prize when you’re shopping this month for decorative Indian corn.

Transposons can also be agents of disease, lately a hot topic. They can, for example, boost the potency of genes involved in disorders. Clinical geneticists have identified several instances where a “novel insertion creates a highly damaging allele affecting the coding capacity of a known disease gene,” a recent review observes. Also, transposon mobility in body cells is now known to be a factor in at least some kinds of cancer.

On the other hand, as the authors point out, when these mobile elements move around in eggs and sperm, they can become an important source of genetic diversity, including human genetic diversity. A 2010 paper in the Proceedings of the National Academy of Sciences argues that transposable elements have been a major factor in the success of Homo sap, contributing significantly to our unusually rapid evolution, especially evolution of our big brains.

So ncDNA can sometimes be damaging and sometimes quite useful. Mostly it is neither. In every cell of our being we manufacture this seriously excess DNA avoirdupois (ok, junk) and then we lug it around. Yet the humped bladderwort makes it quite clear that worldwide success doesn’t require a lot of ncDNA, and neither does evolution; U. gibba has invented new traits that make it a more efficient carnivore despite devoting only 3 percent of its genome to the raw material for evolution.

Why does nonfunctional ncDNA hang around?

Wouldn’t it be sensible for organisms that are schlepping a lot of apparently useless ncDNA to have evolved deleting mechanisms? Why isn’t the H. sap genome lean and mean like U. gibba’s?

Turns out that nonfunctional ncDNA probably isn’t much of a burden. Eisen tells me in an email that while there may be an energy cost to replicating ncDNA, whether that affects fitness is “largely unknown.

“However, even if we stipulate that non-functional DNA is deleterious, it does not immediately follow that organisms will just get rid of it. Remember it’s not like there’s a mechanism for the organism to just purge itself of non-functional DNA in one fell swoop.”

That doesn’t mean it’s impossible for selection to act on DNA content. “This is all theory/speculation – because we don’t really have any cases where we understand what’s going on – but you can imagine an individual in some species that develops replication machinery that tends to lose DNA in each generation,” he says. By chance, or maybe because extra DNA is particularly harmful, the DNA-losing trait can become dominant in the species. “[O]ver time, its genome size will decrease, with those losses primarily coming in non-functional DNA, since losing functional DNA is clearly bad.”

So loss of all of a species’ irrelevant DNA does not happen in a single event. It comes about through a series of steps, probably a great many of them. Which explains why it doesn’t happen all that often. Why there aren’t more slimmed-down genomes like the humped bladderwort’s. Why there are a lot of organisms whose genomes are way more overstuffed than ours.

And the many-step process looks likely to be entirely random, not the product of selection for genome efficiency. Eisen emphasizes, “I know of no case where we have strong evidence for small genome size having been selected for, and it is entirely possible that all the variation we see in genome size is the result of purely neutral processes.”

So ncDNA turns out to be mostly junk after all. Which is not necessarily a bad thing. Eddy is fond of quoting Sydney Brenner, another Nobel Prizewinner (2002, for tracing the fates of all the cells in Caenorhabditis elegans, in the process turning this tiny worm into a ubiquitous model system.)

Brenner’s proposition: The stuff you want to get rid of is not junk, it’s garbage. Junk is the interesting stuff you keep around because it might come in handy some day.

Tabitha M. Powledge is a long-time journalist and editor specializing in science and medicine. She writes “On Science Blogs” for the PLOS Blog Network; new posts appear on Fridays.