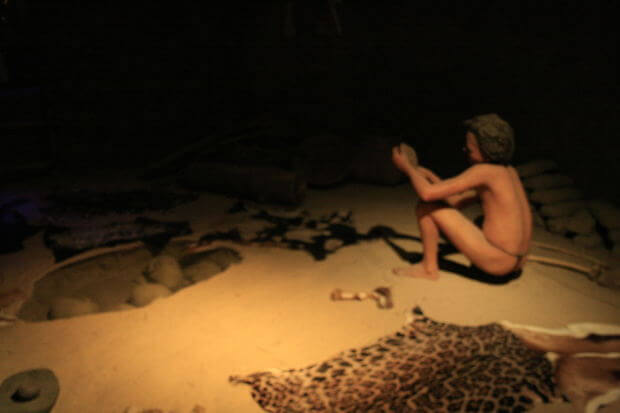 It’s no longer news that everybody except Africans possess a bit of Neanderthal DNA. And it really is just a bit; the latest two studies, published just last week, put the average at less than 2 percent.

It turns out, though, that your 2 percent is likely somewhat different from my 2 percent. Adding up the disparate bits means that Neanderthals have contributed at least 20 percent of their genomes to anatomically modern humans. (“Anatomically modern humans,” that’s us, the last Homo standing, and for clarity and convenience, occasionally I will use the shorthand designation some paleontologists use:  AMH.)

The Neanderthal DNA scattered around the modern human genome could total as much as 40 percent or more of the Neanderthal genome, the researchers say. That means it might not always be necessary to raid precious fossils for their DNA or go through contortions to assemble error-free ancient DNA sequences and prevent contamination by modern DNA. It might be possible to do fossil-free studies of the Neanderthal genome, studies carried out on their DNA preserved for science in today’s humans. It appears that we are walking labs for studying paleogenomics.

How Neanderthal DNA helped us

A portion of that legacy DNA seems to have done us good. About 3 in 5 of the AMH genomes from the 1000 Genomes Project that were examined in these two studies possess the Neanderthal versions of some DNA involved in making skin and hair. The researchers believe that may have helped our migrating ancestors adapt to a Northern climate, one that was colder and less sunny than their original home in Africa. It may also have bolstered our defenses against new pathogens.

But there are also big stretches of the AMH genome that contain no Neanderthal DNA at all. “To me, these ‘holes of Neanderthal sequence’ are the most interesting aspect,” Joshua Akey told me in an email. (Akey is an author of one of last week’s papers, which appeared in Science. )”[T]hey might provide a roadmap to positions in the genome that endow uniquely human traits.” Where they are absent, natural selection may have decided that the AMH versions were doing a better job and so eliminated the Neanderthal counterparts. Hence these “deserts” may help define the most important genetic differences between us and them.

What the DNA “deserts” mean

There are deserts on the X chromosome and in genes involved in the testes. Patterns like these in other species ranging from rabbits to fruit flies are regarded as signs that one species is about to split into two.

Hybrid males descended from both branches tend to be infertile, like mules. That’s because males have only one X chromosome, and if it happens to be one that impairs their fertility, then they may not reproduce. Females have two X chromosomes, so even if one is impaired, if the other one is normal, it can rescue her ability to bear young.

“So this suggests that the male hybrids might not have been fertile, whereas the females might have been fully fertile,” Svante Pääbo told Richard Harris of National Public Radio. Pääbo, the grand old man of ancient DNA based at the Max Planck Institute for Evolutionary Anthropology in Leipzig, was an author of the other paper, which appeared in Nature. We might have inherited most of our Neanderthal genes through hybrid females, he said.

Fox News quoted Pääbo as saying Neanderthals must have been disappointed in their sons.

Another author, David Reich of Harvard Medical School, told reporters that we and Neanderthals “were at the edge of biological compatibility.”

“This underlines that modern humans and Neanderthals are indeed different species,” Fred Spoor told New Scientist. Spoor is also at the Leipzig Max Planck but was not a part of the Neanderthal research. Other scientists are more cautious about making so firm a declaration, but it’s clear that many lean toward that same conclusion, that Neanderthals were not Homo sapiens neanderthalensis but, rather, Homo neanderthalensis.

Darren Curnoe, a human evolutionary biologist at the University of New South Wales, blogged, “The latest findings from genome comparisons reinforce the status of Neanderthals and modern humans as distinct species. Those anthropologists who continue to regard Neanderthals as members of Homo sapiens now face a stronger challenge than ever reconciling their position with the DNA.”

If there is one trait above all others that is responsible for our success, it is fluent language. That’s why a detail almost buried in the Science paper caught my eye, and a few other writers mentioned it in passing. The authors reported that none of the modern genomes they examined contained the Neanderthal version of the chromosome region where the FOXP2 gene is situated. In these 665 people, that region, on the long arm of chromosome 7, was one of those Neanderthal deserts.

All land vertebrates possess a version of this gene. One type of FOXP2 has been shown to be associated with vocal learning in young songbirds. More than a decade ago, researchers linked a mutant version of the human gene with a set of unusual language difficulties in a particular family.

Despite what you may have heard, FOXP2 is not a “language gene” per se. Among other functions, it seems to affect motor neuron control in parts of the brain involved in the ability to vocalize.

The fact that none of the contemporary genomes studied seem to possess exactly the same version of FOXP2 as Neanderthals after all, that it looks as if none of the 665 people examined has hung on to the Neanderthal version, suggests that we may have found it wanting and evolution eliminated it entirely from our line. Which suggests, in turn, that Neanderthals might not have had our fluent speaking abilities after all. (Please note that I’m just running my mouth here in the usual speculative Homo sapiens fashion, and that we are speaking of data from only 665 people; the Neanderthal capacity for speech has not been established either way.)

But since no evolutionary development has been more important to the rise of anatomically modern humans and our domination of the planet than language, it might perhaps be said that fluent speech by itself is a defining characteristic of our species.

And that any hominins that lack it are not us.