Who says you can’t have fun with GMOs?

Certainly not Biology Fortified, a non-profit organization that educates and encourages discussion around biology, with a particular emphasis on genetic engineering in agriculture. Agricultural biotechnology can be a contentious subject, but with the help of a bespectacled corn mascot named Frank N. Foode, the organization has found a way to make the subject approachable and fun:

The science behind genetically engineered foods is complicated, and often difficult for people to understand. Some people who think that these foods are strange, dangerous, or monstrous call them “frankenfoods” rather than try to understand them. At the same time many other foods that we commonly eat are themselves very strange in their own right – often even more strange than the changes made through genetic engineering. So we named our mascot Frank N. Foode™ to make light of it all! Our hope is that this fun character can help get people interested to learn and think about the issues surrounding plant genetics and agriculture, and give people a personality who they can follow around the world.

Previously Frank (“your friendly neighborhood genetically modified organism”) was a one-of-a-kind traveling around the world with the organization’s editors–plant geneticists, farmers, and other 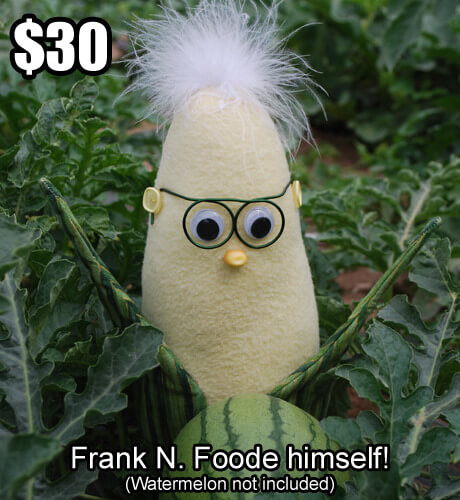 industry professionals. He’s had his photo taken with dozens of scientists, politicians, authors, and activists. Now a Frank N. Foode of your own is available to everyone.

The organization’s Kickstarter campaign has already reached its goal to raise $10,000 to make 500 plush corn mascots for backers, among other perks. The “stretch goal” offered to newer backers includes t-shirts and a plush Hawaiian Papaya, Indian Eggplant or Florida Orange.