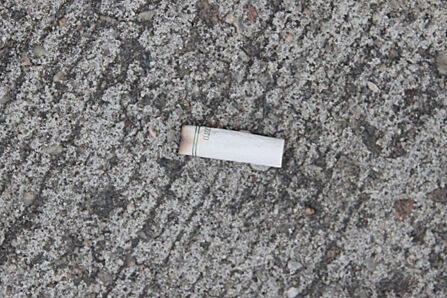 The cop came on to the murder suspect, kissed him at length and juicily, and walked away spitting into a small plastic cup.

She wanted his DNA.

It was only a television show, but a number of questions popped into my head. Is this really doable? What technical problems are involved in recovering DNA from an osculation conglomeration—and separating his from hers?

Not to mention, damn, is this a scriptwriter’s fancy, or is the scene one of those ripped-from-the-headlines things? Are cops really trying to collect DNA on the sly?

According to Buzz Scherr, the answers to that last question is “yes”. Scherr is a law professor at the University of New Hampshire and an expert on forensic DNA evidence. He had no tales of DNA-collecting kisses, but on the radio show Science Friday last week, he said law enforcement officials do follow people around, collecting their used coffee cups and other cell-laden detritus surreptitiously. These items are analyzed for DNA without the warrant that the law requires for a suspect who hasn’t yet been arrested. (Arrestee DNA goes into the databases routinely and legally, it appears.) But, Scherr says, these stealth DNA results go into what he called “rogue databases,” kept secret from the public.

The stimulus for the Science Friday episode was the deliberately provocative art work of the artist and grad student Heather Dewey-Hagborg, who collects DNA from cells people unwittingly leave behind on cigarette butts, stray hairs, used tissues, and the like.Dewey-Hagborg says much can be learned from the DNA that each of us sheds all the time without thinking—skin cells on your sheets, hairs caught in a hat you wore, and, at the restaurant where you ate last night, saliva on your fork and wineglass and chopsticks.

The photo accompanying this piece shows a cigarette butt lying on Myrtle Avenue in Brooklyn just before Dewey-Hagborg collected it. She examined DNA extracted from saliva on the butt and learned that the smoker—a stranger to her—is a woman, that her mtDNA haplogroup is T2b, and that her ancestry is likely 25 percent European. She probably has brown eyes, a bigger-than-average nose, and a smaller-than-average chance of getting really fat.

Dewey-Hagborg says analyzing the DNA of strangers can reveal their ancestry, their genetic risks, perhaps even make possible a guess at their surnames. From phenotype information in the DNA and other technical magic such as facial recognition software and a 3-D printer, she even makes their portraits. If saliva is the original medium, I guess you could call them spitting images. Find a video of her process here.

I’m a little relieved to see that her DNA-derived self-portrait doesn’t seem to be an extremely close match for her own mobile face. I doubt it could be picked out of a lineup. But I imagine time and technical developments and research in our ever-growing genome databases will bring such a portrait a lot closer to reality.

Dewey-Hagborg’s aim is to raise the alarm about the genetic information we shed unknowingly, and how much of it is already accessible to snoops. She certainly succeeded with me.

There are some sobering numbers on her website. It declares that only half a nanogram of DNA is adequate for forensic analysis, an amount that can be retrieved from just 75 body cells. There are five nanograms in a single hair, and each of us sheds an average of 50 hairs a day. While I was writing this piece, I have picked three four hairs off my keyboard.

Also alarming is what Schurr said about all the DNA databases out there besides the official ones we know about. Schurr calls Dewey-Hagborg’s consciousness-raising “perfectly provocative at a very important time.” He has a grant from the National Institutes of Health to study the relationship between genetics, police investigation and Constitutional privacy.

Schurr notes that we’re terribly concerned about cellphone and other digital privacy, but most of us don’t even think about genetic privacy. Yet, he says, unofficial genetic spies are already out there. Police and other law enforcement officials. Paparazzi tracking celebrities.

And the privacy problems extend beyond the person being tracked. If a genetic spy cannot find the person of interest’s DNA in a database, it’s possible to do what Schurr calls a “low stringency” search. That’s an attempt to find people in a database whose DNA matches at only some of the subject’s DNA sites. Such a person might be a relative, and so makes it possible to identify the DNA-shedder indirectly.

No court has yet ruled this sort of thing unconstitutional. Most states have laws about genetic privacy, he says, but it’s not clear that they cover the sort of thing Dewey-Hagborg has done. Or what law enforcement and paparazzi are doing. The state of the law right now is that when you shed DNA, you have legally abandoned it. Anyone can take it, and do with it what they will.

For sale: Erase and Replace

Dewey-Hagborg has taken steps to further genetic privacy, founding a company called Biogenfutur.es. My hunch about Biogenfutur.es and its gorgeous website is that it’s another of her art projects rather than a genuine capitalist enterprise. The pitch is that the future of genetic privacy is to be invisible, and there are two products to make it so, Erase and Replace. Erase claims to expunge nearly all your DNA from a surface. The function of Replace is to modify any residue by swamping it with the DNA of others.

Erase and Replace are about to go on sale at the New Museum in New York City, a home for contemporary art. Price $230 (less if you’re a New Museum member.) You can save that money and get the same effect as Erase, Dewey-Hagborg says, with just about any cleaning product.

She made no suggestions about a cheap replacement for Replace. But homegrown Replace, full of other people’s DNA, might be easy enough to approximate if you were determined and not too finicky about sanitation. Collect people’s discarded tissues or a used bandage and rub them over the site you wish to disguise? Shake somebody’s pillowcase over it? If you are ambitious and technically adept, could you collect used coffee cups and chopsticks, extract the DNA on them, and strew it about to obliterate your presence?

Twenty years ago, Nobel prize-winner Kary Mullis, inventor of the polymerase chain reaction (the standard method for making zillions of copies of a piece of DNA), forecast that someone would create such a product. Dewey-Hagborg’s Replace is one such, born at the intersection of art and politics. How soon will some genetic entrepreneur come up with a commercial replacement for Replace? Only this time not as art for art’s sake, but as a serious product, available not at a museum shop but much more cheaply on drugstore shelves?