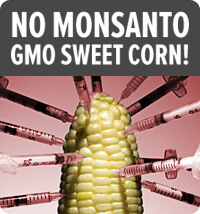 I’ve often wondered if one of the core reasons for customer pushback on any given genetically engineered crop has anything to do with perception. Do consumers perceive the producer receives all the benefit from the technology or crop and the consumer gets nothing? What if the consumer sees herself as the beneficiary? Would that change the perception?

It’s July and sweet corn season is upon us. In Iowa, as in most farming regions, there are sweet corn stands along the roadside on nearly every main highway, especially near cities and towns. It’s a way to make a little extra income, plus it gives me another way to connect directly with my customers.

You see, in several of my earlier articles on the Genetic Literacy Project, I’ve commented on how the end-user isn’t always the customer of the farmer. In the case of the sweet corn (and other produce) stands, the consumer is the direct customer, and often he has the opportunity to look the farmer face-to-face and talk. That is a good thing. It’s a short period of time that I look forward to each year since we began selling our sweet corn though a simple table set up under a tent along the road.

Interesting things happen when the consumer and the farmer meet each other. The customers get to meet the guy (or gal) that grew, harvested and now sells the product they are buying. Also, the farmer has the privilege of getting feedback from the consumer, explaining how the crop is grown, relating the amount of care that has taken place to get the product to the point of sale, and of simply saying, “Thank you.” It’s an interaction that is too often lost in the farm-to-table food delivery system today, and one that I personally enjoy.

We’ve always grown sweet corn on our farm for our family and our friends. We would eat it fresh out of the field for lunch and dinner. The big project each summer was to freeze 20-30 dozen ears worth of blanched corn in quart containers. Those Tupperware containers of golden deliciousness would come out during the winter, and we’d enjoy the taste of summer again.

Often our corn was only a few rows, stuck along the edge of the field somewhere. We’d plant it and hope. Hope the raccoons and deer didn’t find it. Raccoon and deer have an uncanny knack for sampling the sweet corn a few days before it’s reached the perfect ripeness for human consumption. There were several years along the way that the wildlife ruined the crop before we picked the first ear. As we moved to selling corn, we managed to keep those pests out of the sweetcorn by using electric fencing.

Other pests, such as insects, were an annoyance but didn’t ruin a complete crop. Earworms for example, will tunnel into the tip of the ear and eat down toward the base, making it unfit for human consumption. If the earworm was small, and had not caused much damage, we would cut the damaged tip off the ear and use the remainder. This is a fine strategy if you are picking corn for your own consumption, but unpalatable for the majority of consumers. They want pristine ears. No bug damage, no wildlife damage, nothing.

As the roadside sweetcorn sales grew, we had to be conscious of what the customer wanted. To assure that we would have more saleable ears, we would apply an insecticide to control earworms, usually with a tractor mounted sprayer. I’d have to wear a mask to filter out the insecticide, wear gloves, long sleeved shirts, etc. It wasn’t pleasant work in the hot Iowa summers. Although the insecticide was approved for human exposure after the designated pre-harvest interval, the knowledge that you were eating a pesticide, even at miniscule and safe levels, was always there.

The insecticide application continued for a period of years. Customers knew they were buying sweet corn treated with an insecticide. They weighed it against the distasteful chance of finding worms in their corn and based on feedback, they chose the treated ears.

Three years ago, I became aware of a company, Seminis, that produced a Bt sweet corn variety that could control earworm and a host of other damaging insects without the use of insecticide. I was intrigued. Not intrigued enough to try it yet, but I started asking questions.

“Is this new Bt sweet corn as tasty as the current customer favorite?”

“Will it be accepted by the customers if they find out it’s a GE sweet corn?”

Questions, lots of questions were asked and answered. I understood the technology as it is similar to the technology we use in our commercial field corn, and had faith that my customers would accept the new variety of sweet corn. Last year, we took the small step of planting a sample of it to see how it would be accepted by my customers.

I planted a variety named Passion II, along with the current non-GMO favorites Incredible, and Bodacious. Cute names, aren’t they? The first year would be a trial to get comfortable with this new sweet corn, and test for customer acceptance.

Passion II, produced by Seminis, contains both the glyphosate tolerant and insect (Bt) traits for above and below ground insect control. Stacking, as this is called, allows farmers to address a number of growing challenges, in this case helping to reduce the spraying of more toxic chemicals to control  insects and weeds. This is a good thing. No longer will I have to make multiple applications of insecticide to treat for Earworm and European Corn Borer. I can now use glyphosate instead of herbicides that were less effective and caused damage to the plants.

Throughout the growing season, I was very impressed. The variety itself seemed to be a very robust plant, outgrowing the Incredible and Bodacious varieties it was planted near. Herbicide applications of glyphosate went as expected and did not cause leaf damage or stunting as the alternative herbicide did to the other varieties. All in all, I couldn’t wait to present it to the consumer and see the reaction.

The first harvest days came and I placed both the Passion II and Bodacious varieties out on the table and clearly marked them with the following: “Passion II is a genetically engineered variety with the Bt trait to control insects. No insecticide was applied to this sweet corn.;and, “Bodacious is an old stand-by and was treated with insecticide to control earworm and European Corn Borer.”

I expected the customers would be skeptical of the new variety because of the GE traits. However, I think I know sweet corn customers and it always comes down to freshness and taste. They would certainly ask if the taste was as sweet, and if the kernels full and tender like the variety they were accustomed to. I knew the answer, but the customer is always right.

The first few customers were skeptical. They mostly asked about the taste and just a couple questions about what the GE trait was about. I gave a few ears of Passion II to them to try. As they returned for more, something very interesting happened. They liked the taste of the new Passion II as much as they did the taste of Incredible and the fact it was a GMO was secondary, or even nonexistent. In fact, second to the comments about taste, the uniformity of the ears and lack of worms were often noted.

More and more people tried the GE sweetcorn and the comments continued. The taste was equal to, and in some cases better than the former favorites, Incredible and Bodacious, but most importantly Passion II was picture perfect and … NO BUGS!

This new sweet corn, Passion II was a hit! I no longer had to sort what I harvested for bug damage that often rose above 30% even when I used insecticides. The ears were uniform due to the corn plant growing without stress from herbicide and from weed pressure. Harvesting was as easy as walking down the row and picking every ear, no more checking and searching for ripe ears. Customers loved it because of the taste, and no longer had to worry about the occasional worm that I missed. They could buy a dozen ears and know they were nearly carbon copies of each other. It was certainly a win-win!

For the 2014 season, based on customer acceptance, we are planting two Seminis Performance Series varieties. They are Passion II and a new variety, SV9010SA. I’m a little disappointed in Seminis for the designation of the new variety. Maybe something like “The Best Damn Bi-Color” would have been sexier. But I’m not in marketing, I just grow it, eat it, and sell it. We’ll come up with something more interesting at the stand.

We’ve sampled the first few ears of the new variety already this season and it’s pretty good. I’m sure now that the customers have been educated on the advantages of GE sweet corn, they can focus on taste and quality of SV9010SA (soon to be re-named, I hope).

Hopefully customers outside my small-scale sweet corn business can also see that GMO’s can and do have benefits for the customer, not just for the producer. There are other GMO’s out there with consumer benefits. Golden Rice, Virus-resistant Cassava, and Vitamin enhanced Bananas are just a few. Those traits don’t significantly benefit the producer, but the consumer will certainly see the benefits in better health and improved palatability.

Using science to benefit the consumer, whether it’s higher quality produce or providing health benefits to those who are less fortunate, isn’t that what it should be all about?

Dave Walton, a contributing columnist to the GLP, is a full-time farmer in Cedar County, Iowa growing GM and non-GM corn, soybeans, alfalfa and pasture on 500 acres of the world’s most productive soil. Follow him on twitter at: @waltonagseed.