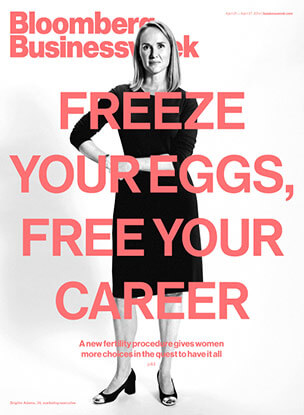 Apple and Facebook probably thought they’d get a lot of love and praise for their generosity when they offered women employees a surprising new reproductive benefit: up to $20,000 to freeze their eggs so they could delay childbearing. The companies may have been surprised by the near-unanimous outrage from the commentariat.

There were only a couple of positive comments I could find, both in the New York Times debate about egg freezing that appeared last week. One came from Jennifer Hayes, who runs a website that provides information on egg freezing. The other, not exactly a ringing endorsement, was written by Amy Klein, who has been publicly chronicling her frustrating and frustrated attempts at conceiving via in vitro fertilization. She mused wistfully that if egg freezing had been more reliable when she was in her early 30s, she might have done it.

The $20,000 move was pioneered early this year by Facebook, whose COO is a woman, probably the best-known woman in technology: Sheryl Sandburg, co-author of the handbook for women of ambition: Lean In: Women, Work, and the Will to Lead. I can’t help thinking of this new benefit cynically, as a smart business and financial move for the companies that do it. It has been terrific PR and seems to be fully in line with the principles expressed in Lean In.

Despite all the published negativity, I suspect a lot of women would regard this as a splendid perk. $20,000 is serious money, and it’s money that seems on the surface to be addressing the having-it-all issue. Never mind the fact that it’s a way of hanging on to valuable employees that would be expensive to replace. Never mind the fact that $20,000 here and there is petty cash compared to the costs of really facing up to work-plus-family challenges: Much longer parenting leaves, easy accommodation and encouragement for women who want to breast feed, on-site daycare and superior nursery schools, flexible work arrangements.

Egg freezing: the reasons to say no

Some women probably do like the idea of a company assist with postponing childbearing. They might change their minds if they read up on the risks of egg recovery and the disappointments of in vitro fertilization and other forms of assisted reproduction. There are lots of reasons not to go for egg-freezing.

Ova cryopreservation was originally developed as a way for women undergoing egg-damaging cancer treatments to rescue their eggs beforehand. Yes, the American Society for Reproductive Medicine declared in 2012 that it was no longer an experimental procedure. But even so, cryopreservation greatly reduces the chance of pregnancy. ASRM’s own data show that the chance of fertilizing a frozen egg is at most 12 percent, and the chances decrease the older a woman is when her eggs are removed and frozen.

The procedure costs about $10,000 (plus $500 annually for storage.) $20,000 would cover two attempts at egg recovery and successful freeezing, but success all too frequently requires more than two attempts.

Also, egg recovery is not fun for the egg-container. Bioethicist Françoise Baylis describes it thus: “ovarian stimulation and egg retrieval to collect eggs for freezing are both onerous and risky. The two weeks of daily injections are known to be painful and uncomfortable. There can be cramping, abdominal pain, nausea and vomiting. More serious possible side effects include rapid weight gain and damage to organs close to the ovaries.” There are other smaller risks too, she says, including possible cancer.

Also, she notes, ova cryopreservation is so new that the data are not yet in on how children born of egg freezing fare. So far, so good, it appears. The human egg is a remarkably sturdy little thing; it can be manipulated in all sorts of ways with no apparent damage. But we don’t know for sure yet that the kids are all right.

Also, egg recovery and freezing is only part of the process. To make an egg into a fetus requires in vitro fertilization. It doesn’t seem to be clear whether the companies will pay for that too, and it’s not cheap either. The handy online IVF Cost Calculator–you can find anything online–puts the minimum at nearly $13,000, but it can go up and up and up depending on circumstances. It’s quite common to need more than one try at IVF, and success is by no means guaranteed no matter how many times a woman tries.

Egg freezing and IVF are only the first steps

Suppose things go swimmingly, that frozen eggs are fertilized successfully with partner or donor sperm and an embryo is ready for transfer into a welcoming uterus. A woman may try to stop time by freezing her eggs for later use when she’s young, but her body will go right on aging. The older a woman gets, the more unlikely a successful pregnancy. The IVF Calculator says in the best case, a 35 year-old woman using her own eggs and presumably her own uterus, the chance of a successful live birth is 51 percent. Few women are that young when they resort to IVF.

The data Megan Garber quotes at the Atlantic are much less optimistic, if you can call a 51 percent chance optimistic. “A 2013 article in the journal Fertility and Sterility shared the results of a meta-analysis of more than 2,200 cycles of freezing and thawing, analyzed according to the age at which women froze their eggs. The probability of a live birth after three cycles—rather than the two that a $20,000 benefit would pay for—was 31.5 percent for women who froze their eggs at age 25, 25.9 percent at age 30, 19.3 percent at age 35, and 14.8 percent at age 40. The ASRM warns against relying on egg-freezing as a way to extend fertility.”

The real reason for egg freezing

The chief market for egg freezing is, of course, women who understand the reality that to really get ahead, they need to give themselves body and soul to their careers in their 20s and 30s. They know perfectly well that they cannot afford to take family time then even though that’s the optimum time for childbearing physiologically.

In April, Bloomberg Businessweek‘s cover shouted “FREEZE YOUR EGGS, FREE YOUR CAREER.” Emma Rosenblum’s feature quoted several women who have gone through egg freezing. They say they are empowered. They are uniformly delighted with the sense of freedom it gave them. They believe they have been relieved of the pressure to make decisions about marriage and family now now now.

But most of them haven’t tried to use their eggs yet. The data suggest that at least some won’t achieve the fruitful happy ending they are planning on. One went through three cycles of egg recovery ($30,000 plus storage costs), and when she tried to use the eggs a few years later, none was viable. Only one of the women interviewed had actually produced a child from a frozen egg.

Rosenblum declared, “Not since the birth control pill has a medical technology had such potential to change family and career planning.” Jezebel greeted that claim with its trademark scathing takedown. Jezebel author Erin Gloria Ryan complained that the magazine was presenting another parenting choice available only to wealthy (and probably white) women.

Ryan also tackled the central problem that egg freezing is supposed to address: That having babies at the best time physiologically is the worst time for a woman trying to build a career. “Egg freezing is a solution for a sliver of a sliver of a sliver of the population, but it does nothing to address the systemic reasons women who choose to be mothers have a statistically difficult time advancing up the career ladder — corporate culture, inflexible and outdated workday models, lack of paid maternity and paternity leave for new parents, cultural dismissal and undervaluing/underemphasis of fathers’ contribution to child rearing. If those changes were made, fertility preservation wouldn’t be considered a career move.”