This blog is a critical demonstration between what good science says, and how the anti-GM activists twist meanings beyond what the data say, even contradicting the authors’ interpretations.

GMO-Free USA is an activist organization that does a great job blanketing the internet with false associations.  Their tactics are crystal-clear to scientists and to anyone that takes the time to look past their facade. 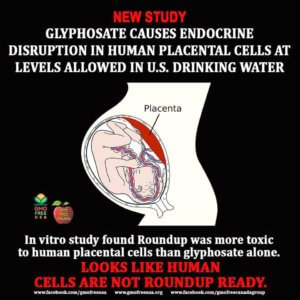 Their recent attempt is the kind that upsets me most.  They use actual published science that looks decent, not a bad paper, and published in a peer-reviewed source. However, they take the real data and sensationalize it with imagery that does not match the research findings.

The work was performed by Dr. Fiona Young at Flinders University.  From her website, it is clear that she has expertise in reproductive toxicology, and studies the effect of potential environmental compounds on reproduction-relevant cell lines.

The authors provide a good Discussion that starts out in line with the limitations of the essay, which are exactly correct.  This is an artificial system in many ways and have limits about what they really mean relevant to whole-organism physiology based on cells dying in a dish.

The authors also recognize that it is the surfactant that is causing observed issues.

The authors then go on to say the same thing I did… dead cells don’t make hormones. They say flat out that there is no evidence of endocrine disruption.

BOTTOM LINE:  You can kill cells with Roundup, and it looks like it is the surfactant that is the problem in tissue culture.  The decrease in hormones does not precede cell death, so there is no evidence of endocrine disruption.

The graphic shared on it’s Facebook page says it all. GMO Free USA are simply manipulating public sentiment by distorting science.  This is shameful misrepresentation of good work done by a solid scientist.

To show a fetus in the womb, claim evidence of endocrine disruption, and then make bold pronouncements of “human cells not Roundup Ready”… it is beyond unethical.