There have been calls recently from predictable sources demanding “tougher regulations for genetically engineered (GE) crops under the federal Plant Protection Act.” They further “demanded [the U.S. Department of Agriculture (USDA)] regulate GE crops based on the process, not product….” While these demands may make headlines, we should be asking: Do they make any sense?

Even the briefest glance suggests these alarms are unwarranted. Crops and foods improved through biotechnology are already subjected to more scrutiny, in advance, in depth and detail, than any other crops or foods in the history of humanity. This is not a matter of opinion. The USDA has been regulating these products since 1987. In the 28 years since, there has not been a single case of a negative health consequence to humans, livestock, companion animals, or the environment.

But the clamoring voices demand more than just increased regulation for safe and beneficial products. They also demand that USDA change the basis on which it regulates such products, away from one rooted in identified hazards and assessed risks and toward a regulatory regime that discriminates against the products of the newest, most precise, and predictable means of improving plant seeds. Is this reasonable?

The U.S. National Academy of Sciences explicitly rejected the argument for process-based regulation in its very first publication in this area, “Introduction of Recombinant DNA-Engineered Organisms into the Environment – Key Issues,” and has upheld this view in every subsequent study.

A regulatory approach that becomes more restrictive in response to increased experience and a lengthier safety record is seriously off the tracks and in need of an update. 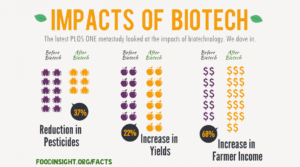