Jon Entine | March 1, 2016
This article or excerpt is included in the GLP’s daily curated selection of ideologically diverse news, opinion and analysis of biotechnology innovation.

When tens of thousands of bumblebees were found dead in June 2013, the initial headlines pointed to pesticide disaster. Within days, the terrible tragedy was politicized by anti-chemical advocacy groups. They started pointing fingers at neonicotinoids as the culprit, linking this tragedy to reports of failing bee health. The Huffington Post reported (corrections in bold):

The epidemic, known as “colony collapse disorder,” caused US bee keepers to lose about one-third of their colonies last year. [Not accurate: CCD occurred in 2006. Bee deaths have varied since then and have sharply declined in recent years] Researchers believe the epidemic is due to a relatively new class of insecticides known as neonicotinoids, which are chemically similar to nicotine and are thought to reduce bees’ capacity to learn scents, making it difficult for the insects to find food. [Not accurate: researchers reject neonics as a major driver of bee health issues, linking it mostly to bee management issues and the Varroa mite]

Activists had a field day holding ’funerals’ for individual bee ‘victims’ to leverage their campaign against neonics. According to Mother Nature Network, this was just another chapter in neonics-caused mass bee killings around the world:

Sound familiar? This past April, Neonicotinoids were positively outlawed in the E.U. after being ID’d by researchers as a key contributor to colony collapse disorder (meanwhile, the EPA continues to take its sweet time in addressing this urgent issue).

In fact, as the Washington Post noted last July in an article titled “Call off the bee-pocalypse: U.S. honeybee colonies recently hit a 20-year high, the narrative promoted by advocacy group critics of conventional agriculture is almost completely contradicted by official government statistics. The introduction and use of neonics in the U.S. coincides with a recovery in bee hive numbers, the Post noted. 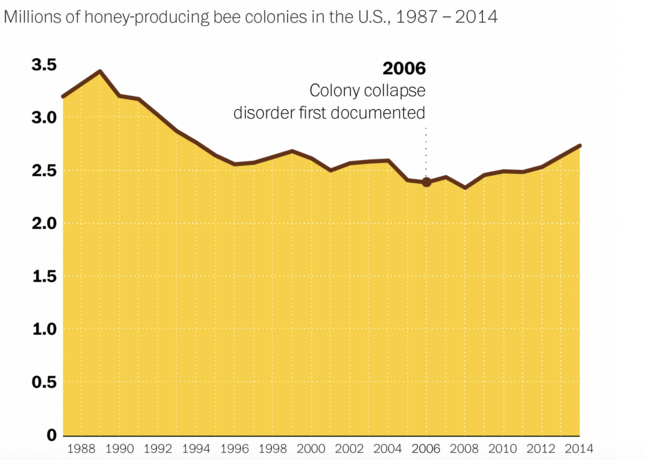 The attempt to link the Portland incident to CCD was particularly absurd. Not only did CCD happen six years previously, in 2006, it affected honeybees while the deaths in Portland involved bumblebees. It was soon determined that the disaster was caused by a local pest control company that mistakenly applied pesticides to blooming Linden trees, which themselves are poisonous to bumblebees.

What’s the real story on bee culture and health?

By now, with years of hype about the supposed crisis in our bee population, we’ve all received an advanced course in the contribution of pollinator species to our food supply and the ecology. They are important.

Many bees, especially the prolific honeybees and bumblebees, are social creatures. Honey bees, especially, live in colonies which themselves function as a super-organism within hives — in which, literally, ‘the whole is greater than the sum of its parts.’

So, while entomologists may focus their studies on individual insects — and ecological activists may be traumatized by the deaths of individual bees — a more accurate assessment of bees and their impact on our food supply is more accurately found by evaluating bee health at a colony-wide level and on crop production.

This was underscored in recent weeks, when a spate of studies were released purporting to demonstrate, once again, that neonicotinoids — pesticides developed to target crop pests while minimizing human and beneficial species exposure — are responsible for ongoing bee health problems.

Why were so many studies released around the same time? Their publication coincides with the end of a temporary ban on neonics in Europe that went into effect in 2014. The European Commission set the end of 2015 as a deadline for new data.

Although some of the studies came from laboratories with a history of independence, most of the research emanated from labs headed by scientists whose political opposition to neonics, seen as a symbol of Big Ag, is well known. Two studies, in particular, attracted media comment.

The first was led by Mikael Henry, a researcher with the French National Institute for Agricultural Research, INRA, whose 2012 study concluded that exposure to high-levels of neonics made it difficult for bees to find their way back to the hive. This, his team predicted, would cause the widespread collapse of bee colonies. Henry is a respected scientist, but he is known for his strong opinions against neonics.

The study became a key scientific justification for the EU neonics moratorium. But several studies released in the two years since challenged Henry’s conclusions, which were based on lab research, considered less reliable than field studies. While bees in Europe did face a challenging few years around the time of the study’s release, colony numbers did not decrease during that period, and have in fact increased healthily since then.

On its surface — which is as far as most journalists delved — the findings from Henry’s latest study appear to support his original conclusion. Henry concluded that the average life expectancy for an individual honeybee foraging on crops treated with neonics was lower than expected.

The BBC called it the “missing link” study, apparently bridging the gap between some lab studies, which indicated neonics could cause harm, versus field research which suggested neonics were not causing harm. It purported to show that individual honey bees foraging in fields treated with neonic pesticides, and, hence, exposed to field-realistic doses, died or disappeared at a higher than normal rate—a nail in the neonic coffin.

How the media was fooled again

What most reporters consistently missed in Henry’s conclusion was his highlighting of “individual honeybees.” While there were some issues in random individual bees, the researchers in fact found no significant difference between the health of the neonic-exposed and unexposed honeybee colonies:

“We could find evidence of troubles at the individual scale in the field but these troubles were compensated for by the colonies,” Henry said. “The population inside the hive was able to compensate for the increased loss of worker honeybees by increasing brood production.

In other words, the colony as a whole compensated for whatever affects there many have been on the individual level — and thus, according to data presented by a researcher known globally for his aggressive indictments of neonics, “there were no observable or quantifiable negative impacts on colony health.”

Needless to say, Henry himself took pains to simply stress the individual effects and wasn’t about to announce that his new study dramatically contradicted the predictions of his earlier one. After all, such candor would undermine the rationale for the EU ban.

Related article:  R.I.P. Monsanto. Our hates will go on.

As usual, the media appeared to base its reporting solely on the press release, spun to hype the danger faced by random individual bees while the hive itself thrived; most probably never read the study. Nor did they mention that the Henry team’s results actually reinforce the conclusions of previous large-scale field studies in Canada (here, here, here), the UK (here) and Europe wide (here, here, here.

Another study led by Dara Stanley of the UK’s Royal Holloway University focused on bumblebee pollination of apples. It purported to show, for the first time, that bumblebees exposed to ‘field-realistic’ doses of neonic pesticides resulted in reduced pollination services. Specifically, researchers claimed that the neonic-exposed bumble bee colonies provided lower visitation rates to apple trees, collected pollen less often than the control group, had longer foraging flight times, and that apples from the trees pollinated by the neonic-exposed bumble bees contained fewer-than-normal seeds.

But as in the case of the Henry study, Stanley’s research team downplayed in its commentary and public statements — and the media ignored — the massive contradiction between the stated conclusions and the actual data. The figures show there was no difference in terms of fruit set, end number of apples produced or the proportion of trees actually bearing apples between those pollinated by the neonic-exposed and the un-exposed bumble bee colonies.

These, after all, are the kind of results that matter to agriculture. But you have to dig into the study’s supplementary data to figure this out — and to learn that bumblebees, make lousy apple pollinators; 29 – 56 percent of the apple trees that the un-exposed bumblebees pollinated in Stanley’s experiment bore no apples.

Look at the irony of Henry’s and Stanley’s research. Studies that focused on the effects of supposedly field-realistic neonic exposure on individual bees — on lifespans and foraging abilities — end up confirming few or no observable differences in the health of bee colonies — or in the agriculturally meaningful measures of their pollinating activities.

To put these studies in scientific context, three recent studies that confirm and reinforce the results of all other large-scale field studies to date — field-realistic exposure of bees to neonic pesticides does not harm bee colonies — have gone largely unreported. A team led by Natural Resources Institute of Finland researcher Jarmo Ketola, in a large-scale field study over two growing seasons (2013 and 2014) of turnip rape in Finland, found that field exposure of bees to the neonic thiamethoxam seed-treated crops had no adverse effects on honey bee colonies.

Bee exposure to spray-applied neonics did have a temporary effect on colonies, but recovery took only about two weeks. The study did note concern over accumulated residues of neonics in beehives— the result of bees’ natural foraging — which approached the threshold for damaging exposure, requiring closer examination and study. Unfortunately, however, there was extensive cross-contamination of the experiment’s fields, with detected neonicotinoid levels in the control (untreated) fields exceeding those in the treated fields, limiting the study’s utility.

Two other studies showing limited or no harm have been ignored altogether, apparently because of the industry ties to some of the research. First, Helen Thompson’s research team, publishing in Pest Science Management, found no adverse effects of seed treatments of the neonic pesticide thiamethoxam on oil seed rape crops for bumblebee colonies even with high rates of exposure. The team concluded that the results “add to the weight of evidence that, under field conditions, there are no effects of thiamethoxam use as a seed treatment on winter oilseed rape on bumble bee colony development or forager activity.” Thompson had left the UK’s Food and Environment Research Agency in 2013 to join Syngenta, the chemical company which manufactures some neonics.

Journalists and other researchers appropriately view industry-funded studies warily. The rule of thumb: if industry-linked results fall outside of the mainstream independent science community findings, smell a rat. In this case, the Syngenta and Bayer funded research conclusions fall in line with every major field-realistic study of bees and neonics: there appear to be no identifiable health dangers to bee colonies, the overall measure of bee health.

So, what conclusions can be drawn from the recent spate of ‘dueling bee studies’?

Field studies on bees and neonics continue to pose an inconvenient truth to many scientists, NGOs and journalists with a predetermined narrative.

Jon Entine, Executive Director of the Genetic Literacy Project, is a Senior Fellow at the Institute for Food and Agricultural Literacy, University of California-Davis. Follow @JonEntine on Twitter